New York City’s Irish Repertory Theatre this week concludes the run of its 2021-22 holiday production – a revival of artistic director Charlotte Moore’s 2002 musical adaptation of Dion Boucicault’s The Streets of New York – with a final performance on Sunday, January 30, at 3 p.m.

The production is a thoroughgoing success – roistering, lyrical, stylish, and bursting with vitality. 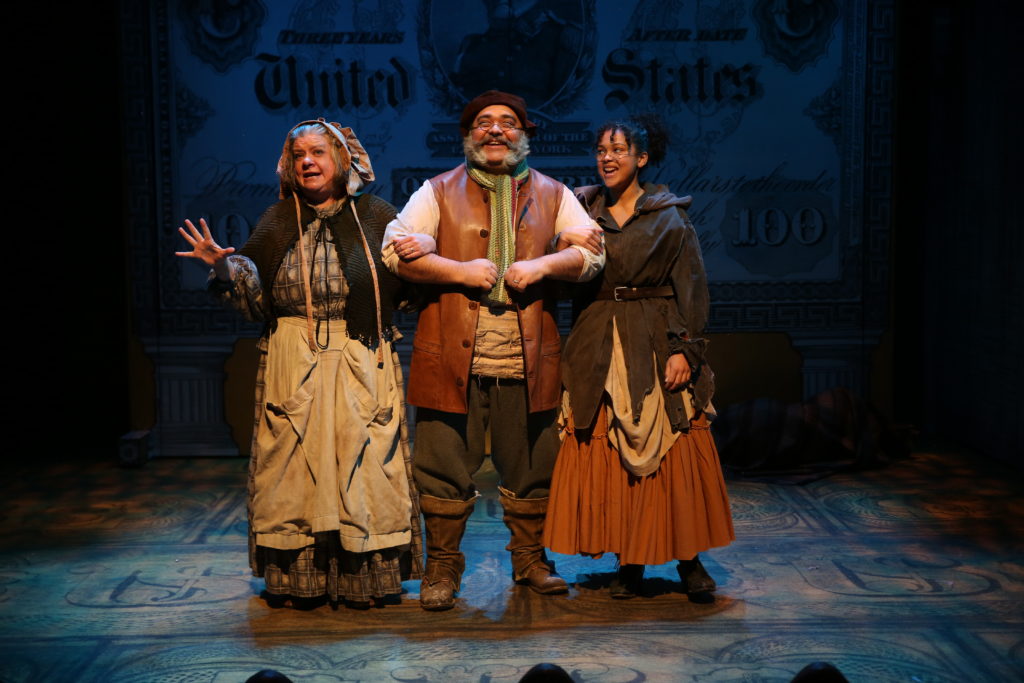 Dublin-born Dion Boucicault was one of the most successful and prolific actor-manager-dramatists of the 19th Century, and in 1857 he premiered one of his most spectacularly successful dramas, The Street of New York (originally titled The Poor of New York), loosely based on an earlier French play.  He would subsequently present the work in other cities internationally, each time transposing the action to the then-instant locale.

Boucicault’s style is a rich mélange of muscular proto-socialist agitprop, perfumed Victorian sentimentality, aggressive Dickensian pieties, and frankly shameless melodrama – and it works!   A feat of fearless dramaturgic excess, Boucicault reels out a dizzying series of romantic travails, financial hijinks and incredible coincidences in the ever-shifting fortunes of a full dozen principal characters from three contrasting and constantly intersecting families – the filthy rich Bloodgoods, the shabby-genteel Fairweathers, and those paragons of unflinchingly virtuous penury, the Puffys. 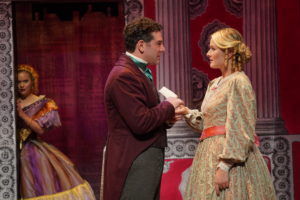 It was a happy inspiration on the part of Irish Rep’s founder and artistic director Charlotte Moore to excavate Boucicault’s opus and embellish it as a sort of John Gay-style ballad opera.  Her original score is thoroughly fetching, not to mention expertly programmed, alternating numbers like the tender and tremulous “When Did I Tell You That I Loved You?” with witty and astringent novelty numbers such as the virtuoso music-hall duet “Villains” (yes, the play boasts not one but  – count ‘em! – two masterful dastards) and the hilarious diva turn that is “Oh How I Love Being Rich!” performed by the story’s unregenerately hedonistic bitch-goddess-ingénue, Alida Bloodgood.

Moore has elicited performances of full-throttle energy and stylistic adventurism from her 12-strong ensemble cast, a company of uniformly excellent actors all vocally accomplished. 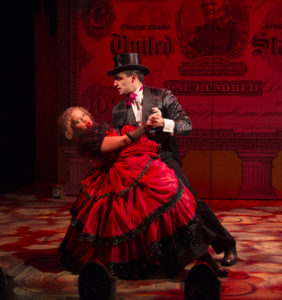 Amy Bodnar, DeLaney Westfall and Ryan Vona are the Fairweather clan.  David Hess and Amanda Jane Cooper are the deliciously reprehensible Bloodgoods, father and daughter, while Price Waldman plays their stalwart and long-suffering retainer, Edwards.  The Puffys – father, mother and daughter – are played, respectively, by Richard Henry, Polly McKie and Kerry Conte.  Rounding out the ensemble are Ben Jacoby who brings a gleaming tenor to the role of the ill-starred aristocrat Mark Livingstone; Justin Keyes as the ruthless and cunning cad, Brendan Badger; and Daniel J. Maldonado, who does double duty as both the sea captain whose startling onstage death is the drama’s instigating crisis, as well as bursting onto the scene later as the flamboyant and seductive tango-master, Duke Vlad.

An ingenious set by Hugh Landwehr opens, closes and spins like a gigantic magical billfold.  Chamber orchestrations by Mark Hartman are rendered with pellucid and shimmering clarity by conductor Ed Goldschneider.

Additional information and tickets are available at https://irishrep.org/show/2021-2022-season/the-streets-of-new-york/