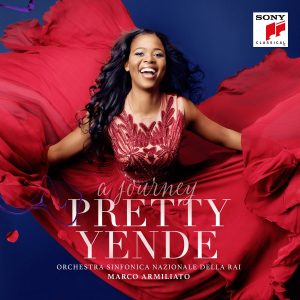 The classical music industry does not so much promote talent as postpone it. Faced with a gleaming young star, the male curators of fame (all men) then seek validation in endless meetings. Agents and record producers hedge and haver. They deliberate and dine out, they call another meeting, and another. Then they write a budget. No wonder the business is in such bother.

It is now seven years since the South African soprano Pretty Yende burst on our ears as winner of the 2009 Hans Gabor competition in Vienna. It is five years since she won every single trophy in Domingo’s Operalia, four years since she conquered La Scala as Mimi in Boheme, almost as long since her Met debut. And in all that time she has never cut a debut record.

That omission has now been repaired, but not in any hurry. The sessions took place a year ago, in Turin at the end of August 2015. The album contains seven arias of Italian bel canto and two of French grand opera. One of these, the Flower Duet from Delibes’ Lakmé, used in a British Airways television ad, first alerted the teenaged Pretty to the possibility that she might sing opera.

And, man, can she sing. Hearing her as pure audio, away from the opera and recital stage, one is struck simultaneously by the richness of character and the variety of colours she can wield. “Una voce poco fa,” from Barber of Seville, is full of fun, hope and hankering. The Lakmé flower song, a million miles away from Parisian pomp, is organic and affecting. A gloom and doom aria from Donizetti’s Lucia di Lammermoor does not show Pretty to best effect, but the mad scene from Bellini’s I Puritani is just perfect – poised for takeoff. At barely an hour this album is short measure, but this is a voice that must be heard. Not a minute to lose.