An alumna of the Longy School of Music in Massachusetts and the Université de Montréal, Anne-Marine Suire made her Paris debut at the Opéra Comique in the role of Marie de Pontcourlay in Varney’s Les Mousquetaires au convent. She has served on the roster of the Académie de l’Opéra Comique (2014-2015) and the Lyon Opera Studio (2015-2016). Among the roles she has sung in Montreal are Cleopatra (Giulio Cesare), Mélisande (Pelléas et Mélisande), Nella (Gianni Schicchi), Suor Genovieffa (Suor Angelica). For the Centre for Opera Studies in Sulmona, Italy she has appeared as Susanna (Le Nozze di Figaro), Servilia (La Clemenza di Tito), Poppea (L’incoronazione di Poppea). Anne-Marine has sung at the Teatro Petruzzelli in Bari as well as the companies of Lille, Rennes and Caen. She has sung Maria (West Side Story) with the Orchestre de la Francophonie under Jean-Philippe Tremblay. In January, Anne-Marine took the role of Christine Daaé (Le Fantôme de l’Opéra) at the Théâtre Saint-Denis in Montréal and at the Grand Théâtre de Québec. Anne-Marine is currently studying with the noted French soprano Annick Massis. 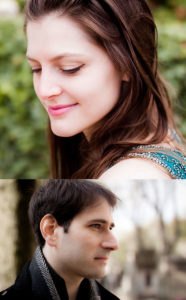 How has the crisis affected you?

One production got cancelled. For Emmanuel, two chamber music tours and concerts up to September.

What are your five favourite operas?

What movies, television shows and books do you recommend?

Cleopatra with Elizabeth Taylor. Four hours long, perfect for the quarantine! Emmanuel is always happy to re-watch the full version of Lord of the Rings. And we both agree that the funniest movie of all time is Some Like it Hot with Marilyn Monroe. As for books, Emmanuel’s choice is 1Q84 by Haruki Murakami. My choice: The Desire Map by Danielle LaPorte.

Why did you join Corona Serenades?