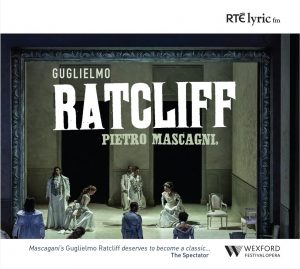 Whenever I watch any opera by Mascagni and Leoncavallo other than ‘Cav’ and ‘Pag’ I have no trouble understanding why the two composers went down in history as one-hit wonders. True, there are those who make claims for Leoncavallo’s La Boheme (Mahler deemed it vastly inferior to Puccini’s) and others are thrilled by Mascagni’s sex-slave Iris, but neither work has struck me as more than a barrel-scraping of the short-lived 1890s verismo craze, deservedly occupying the fringes of musical memory.

All the more reason, then, to eat a few of my words on this first encounter with Guglielmo Ratcliff, a Heine-based, Scottish-set tragedy which Mascagni conducted in February 1895 at La Scala, where it flopped. On his deathbed half a century later, the composer insisted it was his best work.

What catches the ear immediately is the richness of the score, pitched midway between the dark tones of Verdi’s late Shakespearian operas and the Spartan harmonies of Puccini. Difficult to discern any great individuality in the music but the sound is attractive and the time passes fast.

Staged in October 2015 at the Wexford Festival, the cast is impeccable. Angelo Villari is formidable in the tenor title role, Mariangela Sicilia is the soprano love-interest and the baritone David Stout has a first-act tour-de-force. Francesco Cilluffo conducts with a keen ear for dramatic tension and the Irish orchestra and chorus are excellent. The audience are also part of the package, an international gathering of opera buffs who descend on a small Irish town each year as the leaves fall off the trees. Ratcliff might be a long evening at the opera but on record it’s quite a delight.