After winning the second Concours de Musique International de Montréal (CMIM) in 2014 as well as the Bourbeau Foundation’s Best Canadian Musician, for Charles Richard-Hamelin, who took home second prize (silver medal) at the Chopin Competition in Warsaw as well as the Krystian Zimmerman Prize for best performance of a Chopin sonata, 2015 was the most highly anticipated year yet. For a man who had been having an impressive but local career up to that point, this left him, among other perks, with €35,000 and plenty of engagements in all four corners of the world. Notably, he served as a last-minute replacement for Maurizio Pollini in Prague a few months ago and has since been appearing non-stop in Europe, in Asia, where he did a tour with the other competition winners, and of course in Canada, especially Quebec. He is always happy to perform in his home country, which allows him to touch base with familiar surroundings, and he especially enjoys performing in Japan, where the welcoming culture and public listening skills are exceptional. 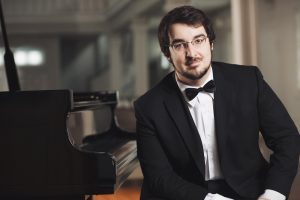 Originally from the Lanaudière region of Quebec, the young pianist began studying with his father, before taking classes with Paul Surdulescu until age 18. He then studied at McGill and at Yale, institutions to which he received full-ride scholarships. After earning  his artists’ diploma at the Conservatoire de Montréal in André Laplante’s class, Richard-Hamelin now studies with Jean Saulnier. Nevertheless he remains aware of how lucky he is to lead an international career at such a young age.

“The announcement of the results at the Chopin Competition is probably my best memory of the competition,” he says simply, listening to the performances of all the candidates via an online stream. “It’s not a problem for me to have to play Chopin at every concert, because it’s magnificent music that fits well with a lot of composers.”

Richard-Hamelin must now put together new programs in between concerts, sometimes even a few hours before appearing on stage. “Festivals are often pretty lenient on the choice of program, so it allows me to combine him with other composers,” he adds.

His first album, dedicated to works by Chopin, was recorded in 2015 and has been praised by the international musical world. Next year will be especially productive for the young pianist, as he will appear all over Canada and in Europe, in Switzerland, Germany and other countries. He has just achieved one of his biggest dreams, performing Brahms’ second concerto with the Orchestre Symphonique de Montréal at the Lanaudière festival.

His second album, released by Analekta in September, combines works by Beethoven, Enesco, and Chopin. Click here for our review.