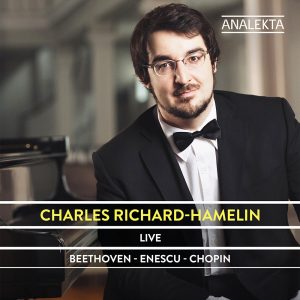 Since winning the Silver Medal and the Krystian Zimerman Sonata award at the 2015 Chopin Piano Competition, Montreal and Quebec at large have been gaga – for good reason – over Charles Richard-Hamelin. Recorded live in concert this past May at Salle Raoul-Jobin of the Palais Montcalm in Quebec City, this album may begin conservatively with Beethoven’s Two Rondos for Piano, Op. 51, but takes a turn with George Enescu’s Second Suite, Op. 10. With the Enescu, Richard-Hamelin digresses from clinical Classicism into the Romanian composer’s grandiose late-Romantic chromaticism. Even in a live recording, Richard-Hamelin shows not only acute elegance and poise, but extreme precision and a heightened emotional sensibility.

Closing out the disc is a selection of four Chopin pieces, each a different genre. Too bad we don’t get a taste of his live interpretation of a larger Chopin work – especially a sonata, but what we get is equally enchanting (if compressed): the lilting lyricism of the Ballade No. 3 in A-flat, Op. 47, the simple effectiveness of the Nocturne Op. 55, No. 2 in E-Flat, the stately virtuosity of the Introduction and Rondo in E-flat, Op. 16, and the charming humor of the Polonaise No. 6 in A-flat major “Heroic,” Op. 53.