On winning the 2017 Queen Elisabeth Competition, 26-year-old French musician Victor Julien-Laferrière becomes the first cellist to do so. This year’s contest, which took place from 8 May to 3 June at Brussels’ Palais des Beaux-Arts, is the first edition to be dedicated to the cello and the fourth instrument to be included in the annual competition. Founded in 1937 as the Ysaÿe Competition, in honour of the legendary violinist, the competition now bears the name of its original patron, the monarch.

Artistic co-coordinator Nicolas Dernoncourt explains that adding the cello to the competition was a natural step. “The decision to include the cello reveals our need for the competition to reflect the profession. During the past twenty years, the popularity of soloists such as Anner Bylsma and Yo-Yo Ma has brought the cello to centre stage. Also, with the demise of the Rostropovich Competition and the Pablo Casals Competition, we are filling an important gap.”

Julien-Laferrière, who began playing the cello at the age of seven, says he entered the contest “because of the history of the competition, its laureates, the list of engagements, and the prestigious jury filled with active popular cellists.” Past laureates include some of the best-known names in classical music history, including the competition’s first winner, violinist David Oistrakh.

A former student of Heinrich Schiff at the University of Music and Performing Arts in Vienna and of Clemens Hagen at the Mozarteum Salzburg, Julien-Laferrière previously won first prize at the Prague Spring Competition in 2012. He earned his first place at the Queen Elisabeth Competition by performing the compulsory commission composed by Toshio Hosokawa together with Shostakovich’s Cello Concerto No. 1.

Why did he choose the Shostakovich? “Honestly, I had an engagement with this concerto right before the start of the competition.” As part of the competition’s regulations, the commissioned work is not delivered to the contestants until they are chosen as finalists. The twelve finalists are given one week to study the compulsory work “without outside assistance” in the Queen Elisabeth Chapel. The secret ballot jury process resulted in Julien-Laferrière’s triumph, earning him a cash prize of €25,000 and a swag of concert opportunities.

Julien-Laferrière says he has “entered a lot of competitions over the last ten years”. He believes that during the competition, “The goal is to feel musically as close as possible to the mindset of a concert. But in order to achieve that, we must prepare to handle all that is different from the concert: being judged, playing before and after other competitors, and in this case the performances being widely broadcasted.”

Reflecting on the role of competitions, Julien-Laferrière says: “I think, like most musicians, that a competition is an unpleasant experience. But it’s the most democratic way to allow talents to emerge. In my case, I never bet everything on competitions. It is too soon for me to say what the value of this prize will be for my future.”

Post competition, Julien-Laferrière maintains a busy schedule. As a keen chamber musician, he is also a member of Trio Les Esprits, which is in residence at the Fondation Singer-Polignac in Paris. 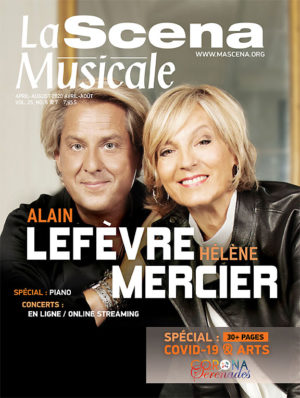