Quite a crowd in Roy Thomson Hall for the Montreal Symphony Orchestra under Kent Nagano. Apparently the American maestro’s magnetism, combined with the good name of the orchestra, can cross provincial boundaries and compete successfully with such dependable sources of entertainment as the Democratic candidates debate.

And the program? Well, Beethoven’s “Pastoral” Symphony did not hurt sales. Pascal Dusapin’s Waves, here given its second North American performance after the premiere on Tuesday in Montreal, probably did not help. Yet this 25-minute exercise in dense modernity was the headline item of the concert. 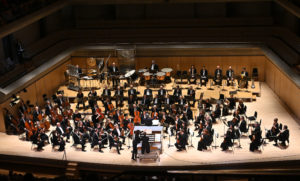 The work is subtitled “Duo for Organ and Orchestra,” the object being not to juxtapose the solo instrument and orchestra in spirited opposition but to create a “confusion” in which the organ increasingly sounds like the orchestra and the orchestra like the organ.

It was in some respects a confusing concept in its own right since full-size organs such as the Gabriel Kney instrument of Roy Thomson Hall are designed to emulate orchestras. Nevertheless, there was a degree of artful ambiguity as OSM organist emeritus Olivier Latry, seated at the grandiose console downstage centre, wandered unpredictably from a supporting role, thickening the texture, to something resembling the lead.

Like many “spectral” scores, this one was more interesting to read about than to hear. Sometimes soft, sometimes loud, the music offered little in the way of thematic development (despite the promise of a crisp two-note figure heard repeatedly at the start) or rhythmic impulse. At around the 20-minute mark the score slipped into a continuum from which no escape seemed possible. Happily, the composer managed to lurch his way to a conclusion.

Always a good man for modern music, Nagano maintained sovereign control over the particulars. Two buglers were positioned on opposite sides of the choir loft. Like the array of percussion stage right, they made more of a visual than aural impression. The crowd responded positively to the piece. An easygoing preliminary onstage discussion between Nagano and the composer put everyone in a relaxed mood.

After intermission the conductor oversaw a fresh and spirited performance of the Beethoven, substantially bathed in sunshine despite the famous thunderstorm. There was much fine detail in the opening movement. Principal winds throughout were in good form, apart from the veterans Tim Hutchins (flute) and Ted Baskin (oboe), who were outstanding. Birdcalls do not get any better than this.

This Toronto Symphony Orchestra presentation began with the “Royal Hunt and Storm” from Berlioz’s Les Troyens. Opening with Berlioz on the road is a four-decades-old MSO tradition. Rest assured that orchestral colour was well attended to. It was the old momentum that was missing. 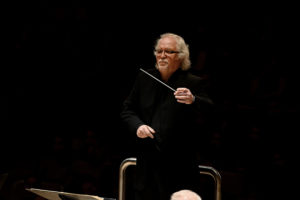 Attendance was spotty the following evening for the hometown TSO performance of Bruckner’s Seventh Symphony under Donald Runnicles. Might a Mozart piano concerto with a name soloist – the standard programming solution for the first “half” of a Bruckner night – have made a difference?

Runnicles actually discoursed on the dilemma of how to preface Bruckner from the stage, perhaps in the interest of adding temporal ballast to the solution he had arrived at, Wagner’s 18-minute Siegfried Idyll. This was given a softly expressive performance with multiple strings rather than in the one-per-part original version.

The orchestra sounded grand in the Seventh. Tempos in the first movement were true to the Allegro moderato marking and balances (as between lower strings and brass in the development) were exact. The great Adagio was warm and prayerful; the steady descent from the climax (Runnicles deployed the optional cymbals and triangle) was as mesmerizing as the building up.

In the Scherzo there was an exciting feeling of volcanic force held dangerously at bay. Just why Runnicles took an edge of volume off the concluding note of the main group is a mystery. The natural thing would be to give it a boost. The finale, loud and disjointed, was unfortunately not at the level of the rest of the performance. Still, with resonant strings, sweet woodwinds, coherent brass and tip-top timpani, this was an impressive outing.

There is a repeat on Saturday night. Tickets are undoubtedly available. Go to www.tso.ca.