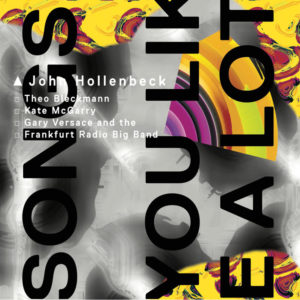 John Hollenbeck
Songs You Like a Lot
Flexatonic Records 001

Just released on John Hollenbeck’s newly created imprint, this album is the final installment of a trilogy of big band recordings dibe with the HR radio jazz orchestra in Frankfurt. Like his previous efforts, Songs I Like a Lot and Songs We Like a Lot, Hollenbeck has flexed his arranger chops once more, driving the crew from his drum set. The tune selections, it must be noted, were actually chosen by the listening audience who were asked to submit its picks. The selections are decidedly pop with numbers by Joni Mitchell (Blue), the Bee Gees (How Deep is Your Love), James Taylor (Fire and Rain)), Peter Gabriel (Don’t Give Up), Anthony Newly (Pure Imagination) and Brian Wilson (God Only Knows), with a bonus original (Kindness) from the leader. For this song project, two vocalists are featured prominently (together and separately), Hollenbeck’s standing partner in crime Theo Bleckman, the other Kate McGarry. The prevailing mood of the album is rather dreamy, magnified by the dense yet lush harmonic envelopes around the ethereal-sounding vocals. Big-band fare this is not, save for the more heavily accented and insistent Wilson number at the end. While there are several instrumental solos strewn throughout, it is the group’s sound that shines the most. Hollenbeck makes good use of elements from Gil Evans and Bob Brookmeyer while incorporating some of the characteristic repetitive rhythmic figures fashioned by the American minimalists.This is an album worth putting on for friends who may not have particular affinities for jazz. But given these opulent readings, it will also be interesting to see, as Hollenbeck muses in his notes, how fans of these pop icons will react to these takes.