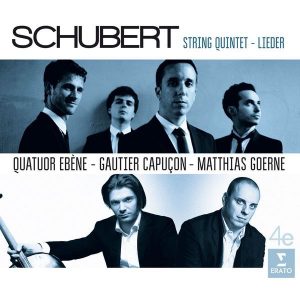 His final work for strings, Schubert’s Quintet in C Major (1828) is unusual for its doubling of the cello voice rather than the viola, Mozart’s quintet model. With unmatched lyricism and finesse, Quatuor Ebène tackles this behemoth of Romantic chamber repertoire, which was only completed two months before the composer’s untimely death. Gautier Capuçon makes a fine fifth wheel, adding a dark intensity without disrupting the balance of the upper strings. This is perhaps the most evident in the exquisite second movement, Adagio, a nocturne that is so unusually slow for Schubert, and given a keenly sensitive treatment by Quatuor Ebène through finely-controlled dynamic and tempo contours.

The adaptation of the five lieder for strings by the quartet’s cellist, Raphaël Merlin, seemed a natural progression within the Schubertiade spirit, seeing as Schubert himself recycled themes from Der Tod und das Mädchen and Die Götter Griechenlands in his String Quartets Nos. 13 and 14. With the ability to not only vibrate but sustain and crescendo through chords, the quartet, with the addition of Laurène Durantel’s double-bass, supports baritone Matthias Goerne, giving the lieder a feeling of both deeper intimacy and acute vastness. With an artistic sensibility stemming from the late quintet, the interpretations of the five lieder have a more mature quality. In this recording Goerne earns his reputation as one of the best lieder singers. This disc is surely some of the finest chamber playing you’ll hear today.