You are at:Home»Education»Opera McGill at 60

If you peel back the layers of any opera company in Canada, you are likely to find Opera McGill graduates at every level: on the stage, beneath the stage, and behind the stage. Take Opéra de Montréal’s recent production of Don Giovanni, for example. While bass-baritone Gordon Bintner, who played his first Don Giovanni at McGill four years ago, reprised the title role, rising star Jordan De Souza led from the pit. Soprano Emily Dorn (Donna Anna) is an alumna, and the show’s stage director, American David Lefkowich also has connections to the program, having directed The Rake’s Progress at McGill in 2010. This is not to mention Patrick Corrigan, an Opera McGill alum who stepped into the role of General Director of the company this year.

All of this is to the credit of the strength of the Schulich School of Music’s Opera and Voice program. One of the things that sets Opera McGill apart is its relative consistency of program, giving each head the latitude to develop their vision. After Edith and Luciano Della Pergola founded the McGill Opera Studio in 1956, the program has changed hands only three times.

“The Della Pergolas were here for 35 years. They started in ‘56 from nothing. They had taxi cab drivers singing roles, they had doctors, they had people from the community,” says Patrick Hansen, the current Director of Opera McGill & Opera Studies. The married couple, who had travelled the world as performers, had connections to an operatic tradition that was unheard of at that time in Montreal. Their grassroots work, most of which happened in an old brownstone on McTavish, was a labour of love that had a lasting impact on the school. 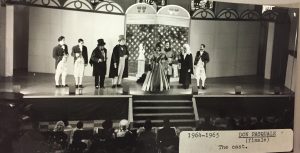 After the Della Pergolas retired in 1989, baritone Bernard Turgeon was brought in as a replacement. Turgeon, who is probably best known for his portrayal of Louis Riel, was superseded as director of opera studies by Dixie Ross-Neill in 1992, while her husband, Bill Neill, was chair of the vocal area. Ross-Neill was a former coach from the Canadian Opera Company.

“She was really focused on coaching and on vocal training. She would pick the operas, she would cast and coach them, but she didn’t produce them,” says Hansen. “She died actually as I was coming in to take the job, which is tragic because I’ve only known her through her students.”

Unlike Ross-Neill, Hansen is a producer of his operas and often reprises the roles of director, conductor, and coach. Hansen, a Midwesterner from Iowa, first made his way through the opera world as a pianist, then as a coach, a conductor, and finally as an artistic administrator at the Florida Grand Opera. “I never said no,” he admits. “I never thought I couldn’t do anything; I just always did it.”

“When this job opened, they were looking for someone who may have run a prestigious summer young artist program, maybe a conductor, maybe a director, and a really good coach,” says Hansen, ticking items off on his fingers. “I saw it, and thought, ‘Well, actually, they’re looking for me!’” 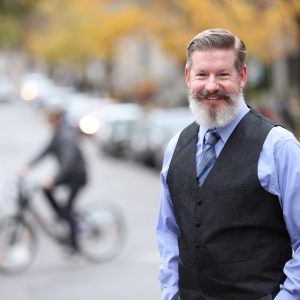 Hansen – who plays an entire cast of characters within a single exchange, regaling you with stories within stories without dropping the thread of the conversation – is someone who thinks and talks (and even blogs) about opera a great deal. But he doesn’t have a lot of patience for things that he thinks are holding back the craft and threatening its longevity.

“I tell my students this all the time, sometimes they believe it: I take opera really seriously; I just don’t take myself seriously,” laughs Hansen. “I think there are a lot of people who take themselves too seriously in opera.”

That willingness to push against entrenched ideas has coloured his tenure at Opera McGill. The first change Hansen made to the program was to expand the role of undergraduate students. “When I arrived, first- and second-years were not allowed to participate,” he explains. “But I do not cast dependent on degree.”

“One of the students I cast was this guy named Philippe Sly, and Philippe Sly was the Lion in Alcina. He was also my assistant director that year – in his first year. Four years later he’s winning the Metropolitan Opera National Council Auditions. He had done 7 or 8 roles before he even left his Bachelor’s degree.” Hansen mentions Gordon Bintner and Rihab Chaieb (who just debuted at the Met) as other examples of McGill undergraduates who gained invaluable leading-role experience.

In terms of the number of productions produced annually and the rigour of the curriculum, Opera McGill is not only the largest theatrical program at McGill University, but the largest opera program in Canada. Over the past 10 years, the University of Toronto has produced 20 operas, while Opera McGill has staged 60. Each year, the school puts on at least three productions, including a Baroque opera with period instruments and historically informed performance practices. Yale is the only other school in North America that annually stages a Baroque opera in this manner. This year alone, Opera McGill will stage nine productions.

This naturally leads to many opportunities for students, not only on the stage but at all levels of the industry. The program is something Hansen calls the “Opera McGill Experience,” which gives Master’s students in particular the chance to be an assistant stage manager or an assistant director. “The program produces not only good singers, but informed critical thinkers,” explains Russell Wustenberg, a graduate of the program (MMus ‘15) and current production stage manager.

Over the past decade, Hansen has in effect developed a model of the professional world, a pedagogical environment that also functions as a company. As he explains, “If you have a program that’s big enough to give enough opportunities to students, you can allow that to happen.”

The results of his work are already starting to show in practice. McGill alumna Aria Umezawa is the Artistic Director of Opera 5, part of the bloom of independent opera companies in Toronto. Umezawa, whom Hansen calls “very clearly brilliant,” is the first female directing Adler fellow at San Francisco Opera. It’s the most prestigious opera fellowship in the world.

“Flexibility is key,” explains Hansen. “The opera world is different and training programs that do not recognize this are training people for an opera business that no longer exists.” Graduates who make it into Young Artists Programs can expect to do many years of tours, children’s musicals in elementary schools, or perform in independent opera companies in productions that push at conventional boundaries. 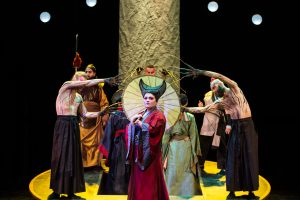 This March, McGill’s Lisl Wirth Black Box will feature 7 operas in 24 hours at 5 different venues: a “transladaptation” (a translation and an adaptation) of a Mozart one-act, a children’s piece called Sid the Serpent Who Wanted to Sing, a French double-bill at Chapelle de Bon-Pasteur, Bluebeard’s Castle, the North-American premiere of James Garner’s East of the Sun, West of the Moon, and a more traditional production of Purcell’s Dido and Aeneas.

All of the choices play into a larger vision. “Some of these venues are really small, I also wanted that. I didn’t want big, empty venues. I want people to be turned away at the box office,” explains Hansen. “That’s something that has to change: people have to stop taking live theatre for granted.”

Even so, bookended by the British works by Purcell and Garner, Hansen pays homage to the past while also looking forward. “60 years later, almost to the day, we’re doing Dido again in the same place. That’s the history part of me.”

Historical precedent is important for Hansen, who chose Johann Strauss’s Die Fledermaus for the school’s large production this January, a work that was performed for the 30th anniversary of Opera McGill under the stewardship of the Della Pergolas.

Hansen becomes giddy describing his new production. “It’s going to be gorgeous,” he confides. “I want to do Act II, Orlofsky’s ball, as if it were designed by Klimt, a style that is gold and black and white and geometric.” The ball also holds other surprises. Each night, alumni are invited to return to the McGill stage to perform for the on-stage guests at the ball.

“No one will know who they are, except the orchestra who’s rehearsed with them the afternoon before. I think it will be exciting for the students on stage because they’ll know that someone’s backstage and they’ll be thinking, ‘Oh my God, who are they and what are they going to sing?!’”

Looking forward to future projects, Hansen hopes to foster more connections between his students and living composers. He’s currently working on the libretto for an adaption of Shakespeare’s Much Ado About Nothing that will be workshopped by students at McGill.

“Whenever I talk like this I make people nervous because they think I’m throwing out the tradition of opera,” he laughs. But in the end it’s all survivalism, tactics to preserve that very tradition while reaching new audiences and preparing new talent for a changing landscape.

“I’ll be here for 25 years when it’s the 75th anniversary of Opera McGill,” says Hansen. “I’ll be 65 and I’ll be retiring. Hopefully, we’ll look back and raise a glass.”