Airat Ichmouratov is a triple talent of an uncommon sort. A composer, conductor, and klezmer clarinettist, he has earned critical acclaim in each domain. Resident conductor of Les Violons du Roy, Orchestre symphonique de Québec, and Orchestre Métropolitain, Ichmouratov made his debut with the Tatar Academic State Opera and Ballet Theatre in 2011. He is a founding member of the klezmer group Kleztory, which has won numerous awards, both domestic and international.

In 2008, Ichmouratov received the “Best Concert of the Year” Prix Opus for conducting Les Violons du Roy in a concert entitled “Russian Impressions” – a concert that included the world premiere of his Cello Concerto. He has been a conductor and composer in residence with the Nouvelle Generation Chamber Orchestra since its establishment in 2011. With the upcoming premiere this September of his First Symphony with Marc David and the Orchestre symphonique de Longueuil (OSDL), the Russian-Canadian composer is enjoying a singular – and merited – moment of success as a modern Romantic composer. Ichmouratov did not always have his sights set on composing, or even conducting. A graduate of the Kazan Conservatory in clarinet performance, he was a professional touring musician until he left for Canada in 1997. Ichmouratov’s wife, violinist and violist Elvira Misbakhova, followed shortly thereafter.

With only one hundred dollars in their pocket, both musicians began to busk in the Montreal métro for pocket change. “At a certain point, I learned where to play, how to play, and what repertoire to play to make enough money to survive,” he explains. It was on the streets of Montreal that Ichmouratov learned how to play klezmer music.

“We had to improvise in order to expand our repertoire, eventually we ended up playing a couple of famous klezmer tunes,” says Ichmouratov. “And it worked. For people, this was something new, something exciting, and we started to make more money.”

“There’s something very special about klezmer music. It’s very emotional music, both happy and sad at the same time,” he explains. “The melodies are very simple, but for some reason you want to dance.”

Klezmer is a style that emerged from the traditional diasporic Jewish music of Eastern Europe. For Ichmouratov, who is a Volga Tatar, klezmer was not part of his personal heritage, but rather part of a sound world with which he was familiar from his native Russia. One day in October 2000 while he was playing klezmer tunes on Ste. Catherine Street, Ichmouratov was approached by double bassist Mark Peetsma, who asked if he wanted to audition for his band. The rest is, well, Kleztory. 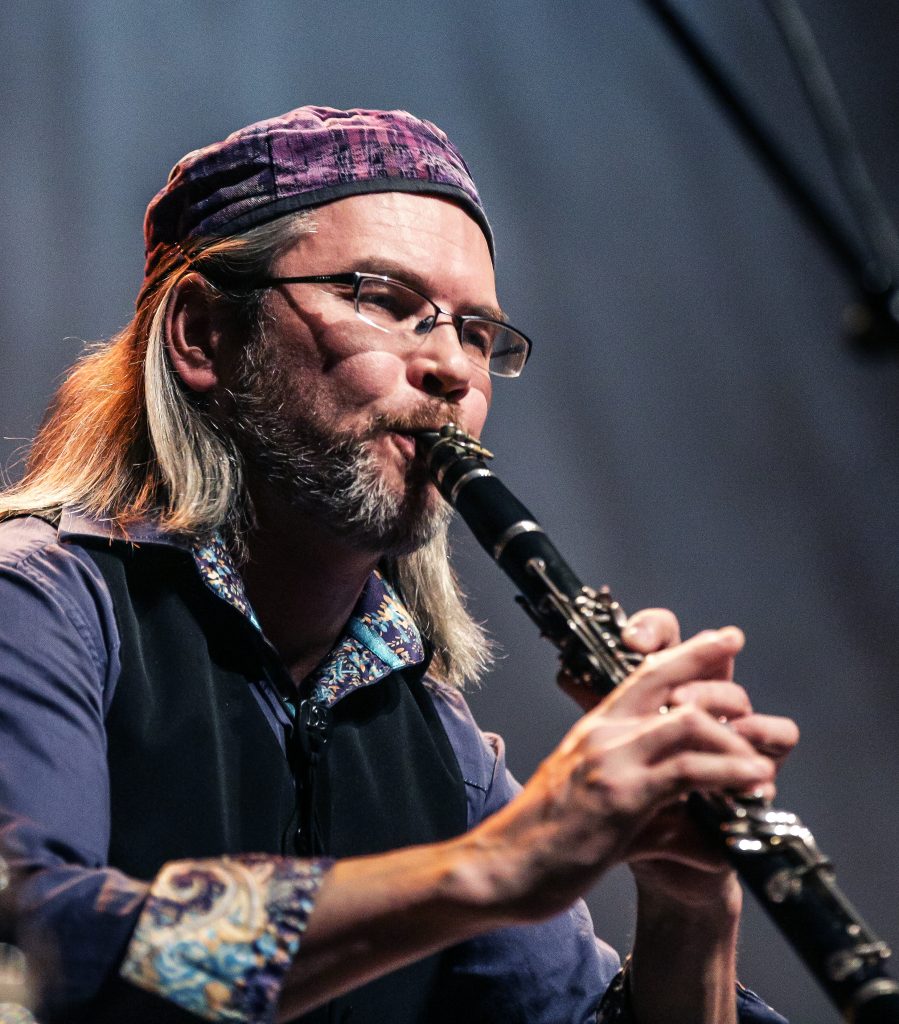 The band recorded their first album in 2001, which caught the attention of the late cellist and conductor Yuli Turovsky, who proposed a joint recording of Kleztory and I Musici de Montréal (which he had founded in the 1980s) that was released on the British Chandos Records label in 2004. “Turovsky said, ‘This album should be sold at a pharmacy as pills for happiness’,” laughs Ichmouratov. Since then, Kleztory has received numerous accolades for their recording; their 2007 album Nomade won the Prix Opus, while the 2014 record Arrival was nominated “Best Traditional Album of the Year” by ADISQ.

Kleztory – which is currently made up of Ichmouratov (clarinets, duclar), Misbakhova (violin), Mark Peetsma (double bass), Dany Nicolas (guitar), and Melanie Bergeron (accordion) – has performed with the Montreal and Quebec symphony orchestras, as well as Les Violons du Roy. They have made several appearances at klezmer festivals around the world, including the 3rd International Jewish Music Festival in Amsterdam, for which they won the Fürth Klezmer Prize.

In addition to the acclaim they have enjoyed with Kleztory, both Ichmouratov and Misbakhova have found success in the local art music community; Misbakhova currently serves as the Associate Principal Viola of the Orchestre Métropolitain, Orchestre symphonique de Trois-Rivières, and the OSDL.

Airat Ichmouratov may have learned to play in Russia, but his true artistic flowering happened after he moved to Canada. “It was like a dream come true, this transition from the Montreal streets.” 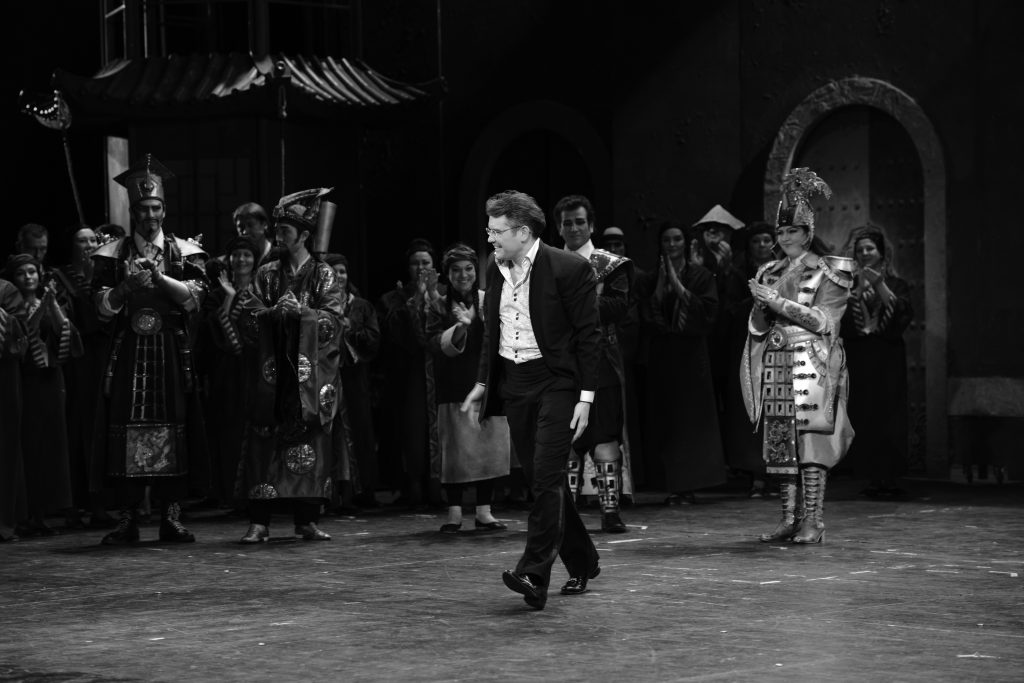 “Music has to be able to bring you to a certain emotional state, but it doesn’t matter how you do it,” states Ichmouratov. “My style is very tonal and Russian-influenced. Well, I would say Slavic-influenced. It’s my heritage, I grew up surrounded by music of great Russian composers.”

Ichmouratov’s first foray into composition was in 2005 during an orchestration course he was obliged to take for his doctoral program in conducting at the Université de Montréal. In the class, taught by composer Alan Belkin, he had to compose and orchestrate an 8-measure phrase in three different ways. Ichmouratov discovered that he had a knack for the craft and promptly set about composing his first work, a string quartet.

“If art doesn’t make you feel, I don’t see why it needs to be created.”

After he graduated from his degree in conducting, Ichmouratov returned to UdeM for a master’s degree in composition. He was Belkin’s final student before retirement. Their close relationship continues to this day: “Every time I compose something, the first thing I do is go visit him and get his feedback.”

“I had so many ideas from my years in music school that I wanted to put everything into my pieces,” says Ichmouratov. “Of course I had too many ideas and I didn’t develop them properly because I was lacking a lot of skills.” Over the years, finding the right balance between thematic and developmental material has been a major goal. “In music, especially composition, you can never say, ‘Okay, well now I know everything.’ Because as soon as you say that, you realize that you don’t know anything when you discover something new.”

Ichmouratov explains that there is an inherent challenge in composing with a late-Romantic idiom; the great canonical Romantic composers have already refined a style of grand orchestral gestures and effusive themes, while exploring the chromatic fringe of tonality. As he states, “My music is hard to sell because I cannot surprise the public or the orchestras.”

Instead of inventing esoteric musical techniques, Ichmouratov searches for the most effective means of communication without compromising his voice. However, he still has to contend with drawing too much upon past masters. “I’m not that young; I’m 44, but I consider myself a young composer,” muses Ichmouratov. “I’m still young in my compositional language. I’m still heavily influenced by the music of Shostakovich, Strauss, and Mahler — three of my favourite composers.”

The evocation of emotion is the most important thing for Ichmouratov: “If art doesn’t make you feel, I don’t see why it needs to be created.”

Out of the Ruins, Something New Ichmouratov’s opportunity to compose his Symphony No. 1 came from a close working relationship with Marc David, the chief conductor of the Orchestre symphonique de Longueuil. Several years ago, the OSDL performed one of his concert overtures and afterwards David raised the prospect of realizing a larger work. “It’s not often that a young composer has the chance to write a big-scale work,” explains Ichmouratov. “Usually we compose something small for the beginning [of a concert], and then they play the classics.”

Capitalizing on the availability of grant money for a number of anniversaries this year — Montreal 375, Canada 150, as well as Longueuil 360 — the dream became a reality. The Conseil des arts de Longueuil awarded Ichmouratov a bursary to complete the work. “Because of [the anniversaries], there was a chance to promote historical events through the arts,” he states. “I consider myself a Canadian citizen. The symphony is a tribute to Canadian history, which is my history now,” says Ichmouratov. “I’m proud to be Canadian, proud to be part of this community.”

The official title of the symphony is “On the Ruins of an ancient Fort,” based on the ruins of Fort Longueuil, which existed until 1810. Today, the Cathedral of Saint-Antoine-de-Padoue stands on the remnants. The 45-minute long work has four movements. The first movement is dedicated to Charles Le Moyne, the Baron of Longueuil. “I tried to place myself back in history and imagine how he would feel,” says Ichmouratov. “I wanted to create an image, a picture of the person.”

For Ichmouratov, the story of Charles le Moyne’s survival in a new country had a strong resonance with his own experience settling in Canada, which included learning two new languages, making a living, pursuing higher education, and finding artistic opportunities. “As I was working on the piece, I realized that we were both immigrants. So the Symphony travels across time, back and forth.”

The work explores parallel experiences between Ichmouratov and historical subjects throughout each of its movements and the overall style remains genuinely Romantic. “It’s funny to present traditional music right now, in modern times, but I don’t want to surprise anyone,” he states. “I want to create something that will be strong, powerful, have an emotional content, have a message through the times.”

“I write music like this because music is a universal language,” says Ichmouratov. Despite social divides based on ethnicity, language, or religion around the world, “through music, we can communicate with every single member of the audience and make them feel.”