The production has run its course, the drums are silent. But a rising subterranean tattoo of enthusiasm for the vibrant LoftOpera brand of alt-opera experience goes on, and it’s well worth logging a memoir of the company’s most recent happening.

Fate has calendared a rendezvous for you in the wilds of Brooklyn. You trek through hell and high water – not to mention some of the borough’s more recherché endroits – to get there. Witches gambol and do their “deeds without a name” on a blasted heath inside a decommissioned warehouse on the grounds of the former Navy Yards. It’s the LoftOpera company’s production of Verdi’s Macbeth¸ and it’s an experience that richly rewarded the effort to get there.

In fact, the treasure-hunt novelty of finding the venue proved an indispensable part of the adventure. 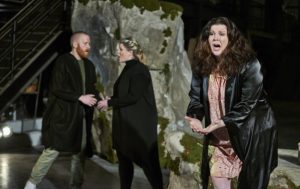 A full moon glowered down on Brooklyn, through a veil of wintry mist, on the eve of New York’s predicted first “arctic blast” of the season. This writer emerged from the New York transit system at York Street, then made necessary recourse to a smart phone GPS app. The night was cold, damp, atmospherically ideal for entering the welter of Scottish skullduggery ahead. En route to the Navy Yards, one appreciated the changes that have been wrought in this area called DUMBO (“Down Under the Manhattan Bridge Overpass”), now a chic and with-it neighborhood, largely unvisited by the writer since a gunpoint mugging incident long ago, in very different and rougher days.

Passing through the gates at the entrance to the Navy Yards, he stopped in at the Kings County Brewery outlet – a cozy wood-and-glass bar inside what was once the Navy Paymaster’s check-cashing station – further to fortify himself. Mixologists Glenn and Brianna offered their special blended bourbon – “the closest we have to Scotch whiskey,” they averred, in the spirit of further complementing the evening’s theme.

Wending on along the thoroughfare that threads through the yards’ complex of looming structures, he took cues from the gathering volume of pedestrians who seemed confident of their destination as they hustled in the same general direction, and finally arrived at the vast MAST Chocolate Factory (a/k/a Navy Yards Building #128). Entering, the writer was greeted by LoftOpera’s general manager, Brianna Maury, an effervescent and engaging hostess who takes tickets, hands out paper wrist bracelets to LoftOpera subscribing members, and points the way toward the free-flowing, unlimited beer and wine station.

Fair is Foul and Foul is Fair… 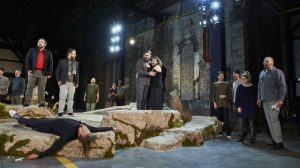 The interior of the warehouse is a leviathan-sized expanse, its furthest reaches receding impenetrably into lightless murk. This could be Brooklyn’s answer to Area 51. But there’s life aplenty teeming at the entire center of the space. In one of many marked departures from classic opera presentation practices, pounding house music fills the air (and will be turned on again during the evening’s two intermissions). The company’s creative team collaborates to assemble a Spotify playlist to accompany each LoftOpera production – in this instance going for percussive, driving, primitive and spooky. Indeed, the whole feel of the event is a bit like a Halloween rave, if such might be imagined refined and elevated by placing Verdi’s noble tragedy as its centerpiece.

Denizens of the LoftOpera-going world are dressed mostly in black, but beneath that de rigeur New York mufti, it’s an impressively varied breed – hipsters, slackers, millennials, thirty-somethings mingle with dowagers and doyennes, executives, artists of various stripes; baristas, models, bike messengers. It makes sense. This is not the Met and there’s no remote pretense of emulating the forms and protocols of some notional cafe society. LoftOpera is an artefact of the here and now, a creature of today’s casual, ad hoc, pot-luck, mix-and-mingle, do-your-own-thing, pop-up urban culture.

The venue is open for an hour before performance time, and the free booze plus pulsating sound system have by then amply massaged aesthetic sensibility to readiness. The audience takes first-come, first-serve positions on free-standing benches arranged around the central staging area – a realistic looking, crafted landscape of rock formations over which the action will roll, march, dance and unfold. The sizable chamber orchestra, some thirty-or-so strong, is arranged to one side. Lights dim, orchestra strikes up, lights rise, Macbeth is underway.

Beam Us Up, Scottie! 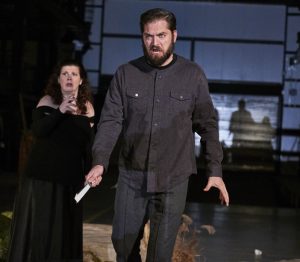 Performances were all limned with gusto. Baritone Craig Irvin in the title role cut a virile, rangy and active figure through the evening’s minefield of inky turmoil and bloody doings, singing with supple emotional specificity in sequences such as the air-drawn dagger scene; transiting effortlessly into rich and resonant puissance in scenes where he demanded information from the witches or ordered servants and hired assassins about; and even exhibiting lightning-bright flashes of glorious madness, as when confronting Banco’s ghost in the famous haunted feast scene. 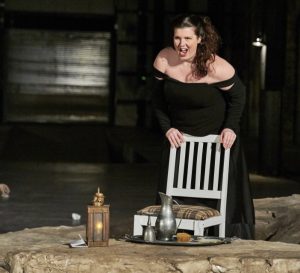 The Witches’ Chorus was admirably animated and creepy, doing fine justice to the detailed musical treatment Verdi gives them. (Indeed, Verdi considered the Witches to be the opera’s prime element, effectively controlling and pervading everything in the mortal world around them.) Their thrilling opening number was given a distinctive staging element, featuring the pantomime spectacle of a young acolyte, presumably believing she is to be inducted into the ranks, instead bound up for what appears to be an intended human sacrifice. The girl is spared her fate, in the very nick of time, by the arrival of Macbeth and Banco, the former interceding to send the would-be victim scurrying to safety. It’s an intriguing and theatrically effective device, offering a rare glimpse at the workings of Macbeth’s purported “milk of human kindness,” and making all the more tragic his later seduction into regicide and damnation.

Director Laine Rettmer exhibits a fine instinct for movement and spatial composition, and made canny use of the depth and height of his unique playing area, even employing two upper galleries and their descending ribbons of industrial stairway to vary performers’ entrances and foster surprise. Rettmer imposes no extraneous meta-theatrical or interpretive conceit on his production – instead, this expertly crafted early Verdi work is permitted to make its own clear, bold statement.

Music director Sean Kelly had the style and the velocity of Verdi’s score well in hand, deftly eliciting from his players just the right elegance or ferocity at every turn. During the performance, rapt silence obtained in the audience, except as punctuated by frequent bouts of applause, or the occasional rattle of an errant beer bottle scuttling across the stone floor.

Macbeth was Verdi’s first foray into adapting his beloved Shakespeare (a hat trick he later rounded out with his career-capping one-two-punch of Otello and Falstaff). And this revival could be considered LoftOpera’s invaluable holiday gift – a welcome new proof of concept for a solid and sadly overlooked vehicle that should be seen more often.

Out, Out, Brief Candle!

Now, again, the bad news – by all accounts, this LoftOpera production easily sold out, with no plans to extend its run beyond its scheduled December 18 closing date. But don’t despise this mere messenger for scoring his fortunate chance to witness Birnam Wood come to Brooklyn. Rather, seize on the opportunity to take note of this spry, dynamic company, and consider becoming a subscribing member (or at least buying tickets early) for its planned 2017 season: Rossini’s Otello in March, Monteverdi’s L’Orfeo in June, Leoncavallo’s Pagliacci in September, and Bartók’s Bluebeard’s Castle next December.

LoftOpera’s Macbeth performed at the MAST Chocolate Factory in the Brooklyn Navy Yards on December 8, 10, 12, 14, 16 and 18; all performances at 8 p.m. Locations for next season will vary.