Not your usual opening night. Small crowd. No mingling. No buzz.

Except insofar as the Montreal Symphony Orchestra under Bernard Labadie proved itself equal on Sept. 11 to the repertoire at hand. This band has met only sporadically since March, mostly in popup chamber concerts that remained stubbornly under the radar.

Apparently the players have not lost their team spirit and pride in playing well. Even in social-distance formation – 43 looking more like 60 as spread across the stage of the Maison symphonique – the MSO sounded like a balanced and cohesive ensemble. 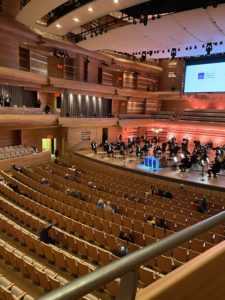 The start could not have been stronger. The opening of Beethoven’s Coriolan Overture was tense and explosive, the staccato strokes resonating impressively in the mostly empty hall. Strings were leonine. Two horns sounded like a dozen. This was not just a good performance. It was terrifying.

There is no terror in the same composer’s Symphony No. 1. Labadie in a recorded comment (shown on a screen above the stage) stressed the score’s connection to its predecessors by Mozart and Haydn. Nevertheless, the Quebec City conductor, seated with no baton, found Beethovenian fibre in the music, even allowing a slight pickup in tempo in the recapitulation of the first movement, as if the rapidly maturing master felt a certain impatience with his own classical upbringing.

If the second movement was too fast, we could still admire the focus of the strings in their contrapuntal give-and-take. I cannot remember hearing the finale performed attacca after the so-called Menuetto (a zesty Scherzo in all but name). The strategy was effective. This was a vital performance, animated in the final minutes by spot-on rising semiquavers in the woodwinds.

The instrumental selections sandwiched three vocal solos. Contralto Marie-Nicole Lemieux was in large but not lustrous voice in Sesto’s big arias from Mozart’s La Clemenza di Tito. André Moisan supplied the fluid basset-clarinet obbligato in “Parto, Parto.” Soprano Karina Gauvin projected well in Beethoven’s “Ah! Perfido” and represented the changing moods of the protagonist with considerable flair. Still, I think Labadie let Gauvin (and Lemieux in Mozart’s “Deh, per questo”) stretch the tempos too liberally. These are dramatic episodes, to be sure. They are also pieces of music.

This concert without intermission was transmitted live on Medici.tv, which explained the video segments. Translations of the arias were projected as surtitles, there being no printed program.

Standard COVID-19 protocols applied. Performers wore masks as they entered and exited. A handful of strings (as well as the timpanist) remained masked while playing. The 250 in attendance, widely spaced, were allowed to remove their masks only when the concert started. Applause was moderate, in proportion to the size of the audience. I heard no coughing. Possibly this will be one of the few benefits of the long hiatus.

Everything went smoothly. Still, it was a strange experience. Vases with flowers in front of the podium and touches of custom lighting did little to soften the eeriness. The only real consolation was great music performed well. ’Twas ever thus.

This concert is available on Medici.tv and the MSO Facebook page. Go to www.medici.tv or www.osm.ca.