Latvia’s answer to Estonia’s Arvo Pärt, Vasks writes long, slow, contemplative works with a strong feeling for lakes, forests and landscape. The title piece, for string orchestra, is one of those Samuel Barber-like adagios that has no beginning, middle or end while offering an image of the universe that is at once recognizable and unthreatening. Much of Vasks’s music is filled with mourning – for his country’s occupation by Germany and Russia, for friends who died – but his signal achievement is never to be morbid. There is always hope somewhere on a Baltic shore. 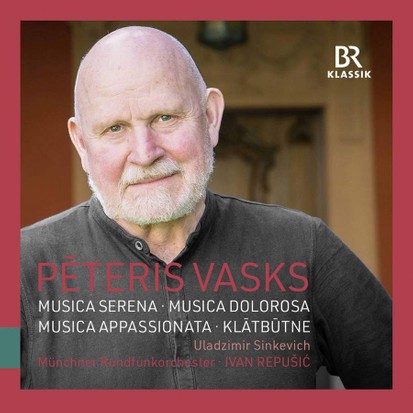 A double-bass player who was barred from composition classes under Soviet rule, Vasks – 75 this year – has a knack for creating differentiated conversations among string sections, creating a sound picture that ranges from quotidinal banality to explosive fury in the midst of Musica dolorosa.

The standout piece on this album, played by the Munich radio orchestra with conductor Ivan Repusic, is a cello concerto with a wordless finale for soprano solo. This is so unexpected that the ear requires vigorous rubbing to believe it. But there’s tremendous beauty at work and the two soloists, Uladzimir Sinkevich (cello) and Anna-Maria Palii (soprano), are perfectly attuned to one another. You will be minded, among other precedents, of Gorecki’s third symphony.

In a year when few orchestras are able to play at full strength, Vasks’ string orchestra creations ought to be just what’s needed to get us through the darkness and back into the light – assuming the overpaid artistic advisors of major orchestras are listening widely enough. Meantime, the Munich radio orchestra plays far better than we have a right to expect from the fourth-ranked band in town.