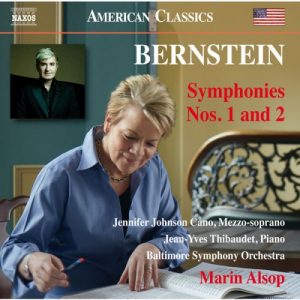 Bernstein’s three symphonies have not enjoyed much exposure on record. Aside from the Sony and DG releases conducted by the composer, my database calls up only three other versions – Leonard Slatkin at the BBC, James Judd in New Zealand and an LA Phil DG download conducted by Gustavo Dudamel. While the composer’s edition must be considered in some sense definitive, his take on the two works has failed to ignite the public imagination.

What catches my ear about Marin Alsop’s new recording with the Baltimore Symphony is how strikingly it diverges from her master’s voice. In the Jeremiah symphony, premiered in 1944 when Bernstein was just 25, the second movement is supposed to depict a barmitzvah boy reading a portion from Prophets. In Bernstein’s recording with the Israel Philharmonic, the effect is sentimental, indulgent, familial. Alsop, a sometime Bernstein student, ignores the synagogue context, blazing out a snappy rhythm that presages West Side Story’s catchy tunes. The finale, following the traditional trope of the Book of Lamentations, is given a similar, neutral rendition by the mezzo soloist, Jennifer Johnson Cano. A delicate wash of strings and woodwinds almost masks the movement’s failure to achieve closure.

The Age of Anxiety, Bernstein’s second symphony, is an overblown piano concerto inspired by W H Auden’s eighty-page poem. Bernstein was piano soloist in the 1949 Boston world premiere, conducted by an uncomprehending Serge Koussevitsky. Many felt the piece worked better in its next guise, as a Jerome Robbins ballet. Alsop, to her credit, ignores these precedents and plays it straight. Jean-Yves Thibaudet might perhaps have made more of the big moments, but the Baltimore sound is agreeable and full of character and there are times when the work, in its 1965 revision, approaches the kind of coherence that Auden achieves in his masterwork. On balance, I find the first symphony has more to offer than the second, but Alsop gives both her best shot. This release must now be considered the go-to recording for these problematic works.