You are at:Home»Uncategorized»The 30th Anniversary Edition of Distant Harmony : Pavarotti in China

THE 30th ANNIVERSARY EDITION OF 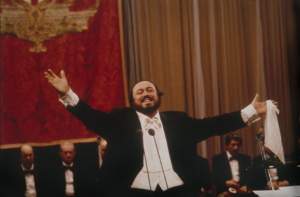 “The feature documentary, Distant Harmony: Pavarotti in China, was first released theatrically, to much acclaim, back in 1988. Luciano Pavarotti was of course, and still is, the most famous opera singer in the world. The film contains unique footage from the great tenor’s tour of China in 1986 and is a must-see for any opera lover.” said Nick Savva, of Giant Pictures. 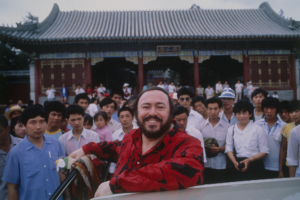 Distant Harmony: Pavarotti in China, a portrait of opera star Luciano Pavarotti’s epic trip to China, was widely praised for its lyricism, humor and seamless structure. It was an audience favorite at Sundance, Toronto and Cork, during its film festival run. Now, with the 30th Anniversary Edition, Pavarotti fans who saw the original film can enjoy the legendary tour across China once more, and new audiences can discover the magic of Pavarotti’s trip to China for themselves. 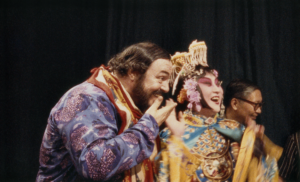 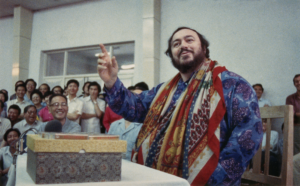 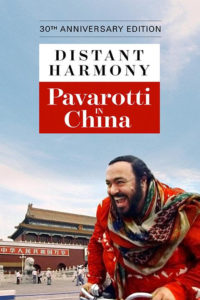 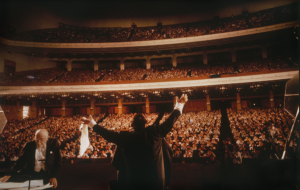 Academy Award and Peabody Award winner DeWitt Sage’s films have engaged theatrical and television audiences in subjects as diverse as severe mental illness; crises of conscience in post-revolution Czechoslovakia and Poland; the plight of the poorest in the hills and hollers of West Virginia; and an Italian tenor’s spectacular China Tour shortly before the massacre at Tiananmen. The style of Sage’s films is non-narrated, strands woven together, but the “style” is ultimately decided by the story and by listening to the film itself as it is assembled and edited.
When Winter Dreams, a film he wrote and directed for PBS’ series American Masters, won The Peabody…the citation said:
“Sage weaves person and place into the rich tapestry of American culture. The film chronicles the life of F. Scott Fitzgerald, one of America’s greatest novelists, in images and ideas as lyrical and inventive as Fitzgerald’s prose.”
Sage’s FRONTLINE documentary, A Place for Madness, was nominated for the 1995 Robert Kennedy Journalism Award and Broken Minds, about treatments and mistreatment of schizophrenia was cited by the New York Times for “setting a network benchmark with its provocative exploration of social policy through moving human story.”
Distant Harmony, a portrait of opera star Luciano Pavarotti’s epic trip to China, was widely praised for its lyricism, humor and seamless structure. It was an audience favorite at Sundance, Toronto and Cork.
Pinto, a dramatic screenplay about the criminal prosecution of the Ford Motor Company for reckless homicide was written for Warner Brothers in 1986 and Sage’s CBS’ Bicentennial film, To America, follows three families who escape to the United States from behind the Iron Curtain. It won the Chicago Film Festival as Best (made-for) Television Feature and The San Francisco Festival as Best Documentary Film. His 1993 film, Faith Under Fire, with Vaclav Havel, explored the successes and grave failures of the church before, during and after the cascading revolutions of 1989.
Earlier in his career Sage wrote, produced or directed Madness for PBS’ BRAIN SERIES (Peabody Award); Princeton…a Search for Answers which won an Academy Awardand was recently shown at MOMA’s Oscar Docs; Art Is…a short film with a bigcast including the New York City Ballet, Jerome Robbins, the Paper Bag Players and Leonard Bernstein. (Academy Award Nomination); Opening Night, the making of a grand opera, with Luciano Pavarotti and Renata Scotto…for PBS; First Edition, directed by Helen Whitney,a (composite) frantic day in the life of a big city newspaper. (Academy Award Nomination) His script for American Masters’ Ernest Hemingway Rivers to the Sea received a full production grant from the National Endowment for the Arts and from ARTE. was nominated for a network Emmy.
Sage is a member of the Film Academy’s Documentary-Feature branch and has more recently taught master-classes at the Maine Media Workshops.
*(For complete filmmaker and film crew credits, please see www.dewittsage.com )
About GIANT PICTURES
Giant Pictures is a boutique digital distributor based in NYC and Los Angeles, which is dedicated to elevating the digital experience. Working directly with filmmakers and rights owners, Giant distributes movies and TV shows to VOD & OTT platforms in North America and worldwide. Giant is a division of Giant Interactive, an award-winning digital media and technology services company, and is an iTunes Preferred aggregator and encoding house. Recent movie and documentary releases include: ‘306 Hollywood’ (Dir. Elan & Jonathan Bogarin, Sundance 2018), ‘Matangi / Maya / M.I.A.’ (Dir. Steve Loveridge, Sundance 2018), ‘Newness’ (Dir. Drake Doremus, starring Nicholas Hoult, Laia Costa, Sundance 2017). Visit us at: www.giant.pictures.com