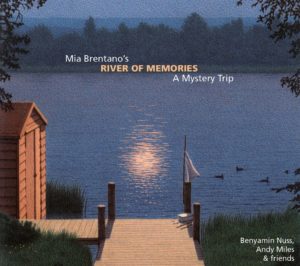 After Hidden Sea, released in 2018, Mia Brentano comes back with a new album, named River of Memories: A Mystery Trip. Over the course of 15 pieces, the composer alternates between a vast array of styles. From various forms of jazz, using piano and clarinet, to almost pop-sounding music, using electric guitar; from aquatic sounds – underwater and rain, more specifically – to what we would be tempted to call “modern music.”

With its warm and sensual feel, the first track “Blue moon” is a welcoming start. The following pieces are darker, almost grim. Heavily inspired by modern composers of the 50s – Stockhausen and the French school of musique concrete in mind – they regrettably don’t sound very new. The ever-changing atmosphere from one track to the next is unsettling, abrupt at times, but eventually the second part of the album takes a lighter tone with a lively rendition by clarinettist Andy Miles (“Angry Mia”). “Dancing in Twilight,” performed together with pianist Benyamin Nuss and Shiori Doi on trombones, is also worth mentioning.