“I’m still processing it,” soloist James Ehnes said after the concert. “He was the first conductor I ever worked with, in 1987. From the time I was 11, he treated me with respect and gave me confidence that I had something to say that was worth hearing. It’s a tragic loss, both personally and professionally.”

“It’s a tragedy,” said NACO musical director Alexander Shelley. “I only met him in person once but clearly he was someone who played an important role in so many careers, and he leaves a huge hole.”

In his remarks at a post-concert reception, NAC President and CEO Christopher Deacon spoke about Brott, who was NACO’s Principal Youth and Family conductor for many years, and said the NAC would be finding a way to pay tribute to him in the coming weeks. 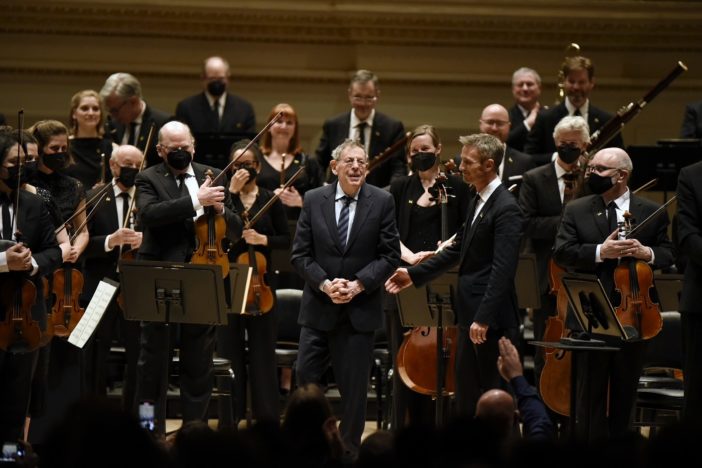 Despite the somber news just before the concert, NACO’s first Carnegie Hall appearance since 1990 was a resounding success for the organization. The hall was full–no doubt in part due to the US premiere of Philip Glass’s Symphony No. 13, which received its world premiere with NACO in Toronto the previous week. I wrote what I had to say about this work in my review of that concert, and will not go on about it, other than to say that repeated listening and a better hall do not change my opinion. Glass himself was in attendance and came out for a bow. Droves of his fans had turned out to give their hero the expected ovation, but there were enough people pointedly not applauding to indicate that not everyone was convinced.

What was thrilling for this critic was to hear a work by a living Canadian woman at Carnegie Hall. Nicole Lizée’s Zeiss After Dark sounded like a million bucks, every rubbery tempo change, Dali-esque harmonic shift and hand clap brought into sharp relief.

As he did in Toronto, following the Lizée, Shelley delivered a few comments on the program in his trademark warm, communicative style, before attacking the Shostakovich Symphony No. 9. Shelley chose some quicker, more urgent tempi compared to Toronto, particularly in the last movement, which acquired an even sharper sense of desperate levity. Chris Millard’s bassoon solo sounded splendid in these exceptionally flattering acoustics. Kimball Sykes (clarinet), Karen Donnelly (trumpet) and Stephanie Morin (piccolo) also shone.

As mentioned, Ehnes was the soloist for the Korngold Violin Concerto. He could not be more temperamentally different from Toronto soloist Blake Pouliot. Where Pouliot was an exuberant, extroverted, risk-taking player who didn’t mind if things get a little messy, Ehnes was all refinement, elegance and distinguished restraint, letting his sumptuous, patrician tone do the emoting for him. His choice of a slower tempo over Pouliot’s for the last movement allowed that section to breathe, while being no less swashbuckling. For me, Ehnes was the winner here, by a nose.

Pouliot and Ehnes both performed the same encore: We Do Exist for solo violin and strings by Ukrainian composer Yuri Shevchenko, who died in Kyiv in mid-March during the Russian invasion. Shevchenko–whose music has been used extensively by Alberta-based Ukrainian dance company Shumka– constructed the piece around plangent themes from the Ukrainian national anthem. Both in Toronto and New York, the encore elicited a sincere, authentic emotional response and a warm ovation from the audience.

A total of three NACO members are now out of the tour due to Covid. Also MIA was Yao, the charismatic and thoughtful artist who had performed his spoken word poem “Strange Absurdity” in Toronto, and had been scheduled to deliver it again in New York.

NACO returns to Ottawa, where it will give the final performances of this program on April 13-14. www.nac-cna.ca/en/orchestra