The National Arts Centre Orchestra is touring for the first time since before the Covid era, its new Philip Glass commission to Toronto and New York City before returning to Ottawa later in April. Just as the orchestra left for Toronto, however, there was a stark reminder that the pandemic is not behind us, as one musician was unable to join the tour due to testing positive that morning for Covid (we wish them a speedy and uncomplicated recovery).

The tour program consists of the new Glass work–his Symphony No. 13, written in memory of the Canadian-American newsman Peter Jennings, who died in 2005–as well as Shostakovich’s Symphony No. 9, the Korngold Violin Concerto, and Nicole Lizée’s Zeiss After Dark, her TSO Canada 150 commission from 2017.

The concerts are being presented under the rather pompous theme of “Truth in our Time”. It’s an unintentionally ironic title–the program, after all, consists of works by white, male composers, save for the three minutes allocated to Lizée. It raises the question of whose truth, exactly, are we talking about? Whose time? To what “us” does the “our” refer? Who decides what version of the truth merits more airtime than others?

A pre-concert panel in the stunning event space at the top of the Globe and Mail building attempted to examine these topics. Globe arts editor Judit Pereira and Buzzfeed pop culture editor/curator Elamin Abdelmahmoud tried valiantly to steer the conversation toward issues of inclusivity, representation and diversity of voices. It was perhaps optimistic to hope that a 30-minute discussion could turn into a frank analysis of the role both journalism and classical music have played in gatekeeping, colonialism, Western empire-building, the entrenchment of systemic barriers to acceptance and participation, and what 1920s media critic and philosopher Walter Lippmann first termed the “manufacture of consent.”

It’s not necessarily the role of art to answer such complex questions, but frustratingly, NACO’s tour program does not seem particularly interested in even asking them in the first place. 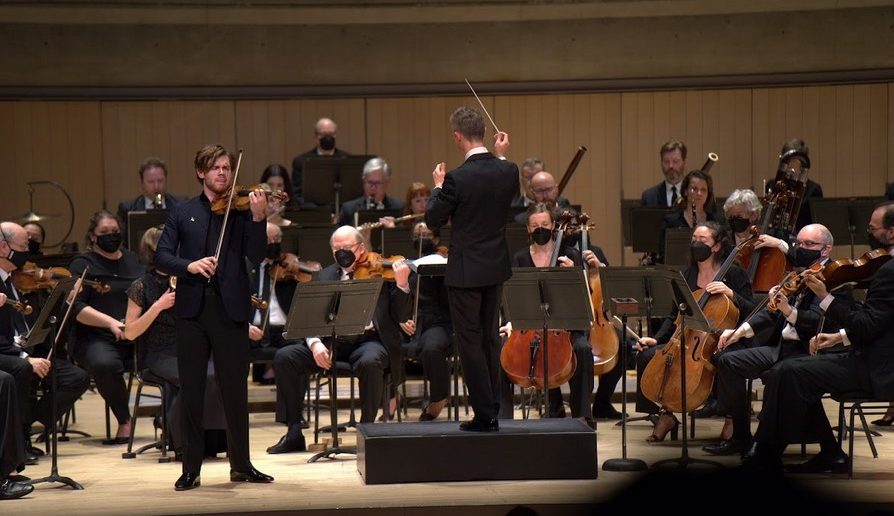 NACO gave the Philip Glass commission its world premiere at Roy Thomson Hall on Wednesday. For a work that has been promoted as the cultural happening of the season, the results were enragingly mediocre. Clearly at this point, Glass is merely phoning it in for a commission fee that could have probably paid for 10-15 better works by BIPOC and women composers. With his 13th symphony, the influential American minimalist once more falls back on regurgitating the vocabulary he pioneered in the laziest way possible: the flatlining loops of tremolos and arpeggios, the baseball organ modulations when he runs out of ideas, the clumsy brass fanfares, the abrupt double bar at the end of movements, as if he were watching a timer. Never mind that the piece doesn’t appear to have the remotest relation to Jennings, his life or his colossal body of work, unless the insipid rhumba rhythms tapped out on the bongos in the first movement referred to the journalis’s reporting from Cuba. Glass has become a parody of himself. An AI fed Glass patterns from his early career could not have generated a duller, less humane result. It was gallant of NACO artistic director Alexander Shelley to conduct such an instantly forgettable work from memory.

Although Shelley is not a Russian specialist, his Shostakovich 9 was, as always, meticulously prepared, masterfully detailed and ultimately convincing. NACO is a smaller ensemble, and there were moments where one missed the sheer juggernaut mass a larger orchestra can provide. But Shelley is brilliant at creating moments of chamber music intimacy within larger structures. The wind ensemble was superb, particularly Kimball Sykes and Sean Rice (clarinets) and Joanna G’froerer, while the contrast between principal bassoon Chris Millard’s hollow howl of a solo and the bombastic low brass would have given goosebumps to the most jaded listener. Shelley was also adept at maintaining an overall mood of forced, uneasy jollity–the pained, frantic eyes hiding behind the performative rictus.

Lizée’s Zeiss after Dark opened the concert with three minutes of pure musical alchemy. She is the most original, endlessly surprising Canadian composer alive, and she crammed more imaginative ideas, rigour and flair into her few pages of music than Glass did in his entire symphony.

Canadian violinist Blake Pouliot didn’t just play the Korngold concerto, he wooed the entire audience with it. Pouliot is a throwback to old-school romantic showmanship; the cocked eyebrow, the crooked-grin charm, the hair tossing wouldn’t look out of place in a scene from Bridgerton. It’s a little hammy to be sure, but you can’t even be mad at him because he’s sincere down to the red soles of his black patent Loubs. Pouliot wears this concerto like a second skin: he is unapologetically sentimental and unironic, his tempi elastic, his phrasing whispering sweet nothings into your ear, his virtuosity tossed off with the twinkling panache of Errol Flynn swinging from a chandelier. Pouliot’s exceptionally clear, sweet, tightly focused tone cuts through Korngold’s lush orchestration in a way that brings to mind Mady Mesplé and other great French coloraturas of the last century.

James Ehnes will be the soloist for this concerto in New York and there couldn’t be a more diametrically opposed artistic temperament. It will be interesting to compare the two. As a parting observation, NACO should have ended the concert with the Shostakovich rather than the glass; perhaps the order will be changed for their Carnegie Hall concert on April 5, which I will also be reviewing for La Scena.

The Return to Ottawa review