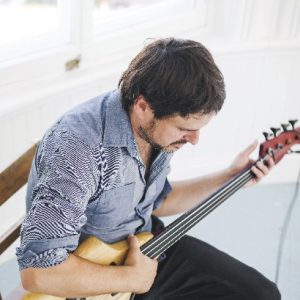 Anyone with knowledge of Montreal’s ­creative music scene immediately recognizes the term “musique actuelle”. Coined over thirty years ago, it first ­became the identifier of a music documented by the Ambiances Magnétiques label, and soon thereafter of the FIMAV, an international music festival in the town of ­Victoriaville.

Since then this genre has spread its wings elsewhere in Quebec, most notably in the ­distant outport of Rimouski. For the last ten years, a local music initiative, Tour de Bras, has taken root in that city on the Gaspé Peninsula. Its mastermind, electric bassist Éric Normand (pictured below), first put together an improvisational ensemble, the 18-piece GGRIL ­Orchestra in 2004, while staging several music happenings with guests from abroad and steadily documenting its activities on a record label named after the initiative itself.

Four years ago, La Scena published a ­feature piece on the GGRIL. Much has ­happened since. Its most remarkable achievement was a ten-city European tour in early 2016, with stops in Vienna, Paris and Milan. Need we say that such a bold move can only be possible with considerable financial ­support? Credit must go to its leader here, not just for securing the necessary funds but also for convincing enough overseas promoters to hire a group of sixteen unknowns from a place they may well never have heard of.

While there has been some turnover in ­personnel, the group’s range has also expanded to incorporate composed materials, running the gamut from graphic scores to more ­traditionally notated scores. It has also brought in guests on a regular basis, its most famous catch being saxophonist Evan Parker, and just last month singer Maggie Nicols from England, who appeared in Montreal with the GGRIL.

Normand pursues more personal projects as well, and some long-distance ones. One of these, a duo with Australian reedman Jim Denley, enabled the bass player to travel down under, and both are headed for an extended ­European junket in early 2018. The current year is turning out to be a banner year for the label as well, for it has issued more than half a dozen sides, five reviewed below. By winter’s end it should release its most ambitious project to date, a five-CD box set of unissued recordings from the Quatuor de jazz libre du Québec, Montreal’s ­pioneering free jazz group of the sixties and seventies.