You are at:Home»Scena Arts»Theatre»Into the Woods: A Tale of Tales 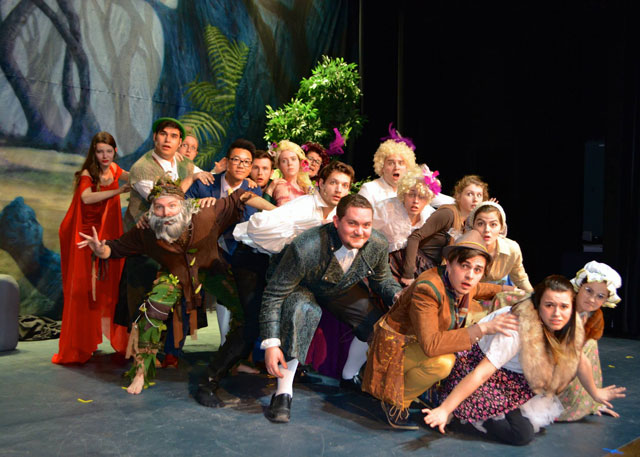 Into the Woods at Theatre Western (Photo: David DiBrina/Western Gazette)

Stephen Sondheim and James Lapine’s classic Into the Woods is certainly not for the faint of heart. I had the pleasure of conducting it last year for Theatre Western in London, Ontario. The musical is an intricate patchwork of fairy tale stories – far more complex than the familiar tales we learned as children.

Act I centres around the Baker and his Wife, who wish to have a child. They are visited by the Witch, who reveals that she placed a curse on their family because the Baker’s father stole magic beans from her garden. To reverse the curse, they must find four ingredients in the woods: a cow as white as milk, belonging to Jack from “Jack and the Beanstalk”; Little Red Riding Hood’s cape as red as blood; hair as yellow as corn, which they pull from Rapunzel in her tower; and Cinderella’s slippers, as pure as gold.

That’s the premise, at least. And there’s a happily ever at the end of the first act when the protagonists get their wishes. If you squint, however, you see the cracks in the foundation that formed in the woods: the Baker is not ready to be a father, the Baker’s Wife is fascinated with the Princes, Cinderella is more indecisive than ever, Little Red Riding Hood is bloodthirsty since her altercation with the wolf, and Jack remains conflicted between pleasing his mom and wanting a friend, but even his fleeting happiness comes at the price of another’s.

When the first Giant falls from the sky, all bets are off. When the second Giant follows Jack down the beanstalk looking for vengeance, all hell breaks loose.

The second act takes a dark turn as the characters are tested again in the woods, this time without the hope of fulfilling a wish. They are on the run – not only from the Giantess, but their own fears. Each must navigate growing up and taking responsibility for their actions as they are faced with complex moral decisions. In the process, every character becomes morally ambiguous: even while they prepare to kill a Giant, Cinderella and the Baker sing, “Witches can be right, Giants can be good. / You decide what’s right, you decide what’s good.” Only one thing is certain in the woods: you must make a decision, however difficult.

Throughout the musical, the most salient theme is the power of stories and storytelling, especially the idea that children learn from and define themselves against the stories we tell. Like Sondheim and Lapine’s Sunday in the Park with George (1984), a great portion of Into the Woods takes place on a meta level, in this case a story about stories rather than art about art. The self-referentiality of the musical is built into its construction; the common fairy tale themes established in the first act are dissected and subverted in the second, from the misogynistic princes to the deconstruction of the good/evil binary.

As it turns out, the most morally ambiguous character, the Witch, trapped Rapunzel in the tower to protect her from the world. As she explains, “I was only trying to be a good mother.” The Witch’s concern for her daughter permeates the score with the Magic Beans/Rapunzel leitmotif. She lectures Rapunzel with that melody, and her daughter is unable to sing anything but, repeating it ad nauseam from her perch in the tower. One can imagine that the Witch was also lectured by her own mother with that very theme about never losing the magic beans.

In the Finale, the Witch gives the ultimate moral of the story: Children learn from the things you say and do. Even in rebellion, they will listen: “Children will look to you for which way to turn, to learn what to be. Careful the tale you tell, that is the spell.”

Stories, fictitious or not, are powerful and can take on a life of their own, and storytelling is a necessary part of the human condition. Thirty years after its premiere, Into the Woods remains as relevant as ever, especially as we continue to discuss the impact of representation in media and who are in positions of privelage to tell stories. But, well, that’s another story.

Vanier College Ventures Into the Woods

From April 15 to 17, the Vanier Music and Theatre Society presents Into the Woods. Funded by the Vanier Foundation, the show is directed and produced by Tamara Vickerd, classical voice teacher at the school.

“It’s musically very challenging,” states Vickerd. “We have been working on this project for a year because it is extra-curricular.” In years past, the group has performed musical revues and modest student-composed works. “This is by far the biggest thing that we’ve attempted,” says Vickerd, “especially since we don’t have a theatre department.”

For this reason, the spirit of Vanier’s production is inherently collaborative, uniting many volunteers from different departments. One person acting in multiple roles is Glen Ethier, Vanier’s Music Department Coordinator, who is also playing the role of the Narrator.

Recent Vanier graduate Christopher Gaudreault is Music Director and rehearsal pianist. Gaudreault, who will attend McGill University next year for a double major in Piano Performance and Theory, will conduct the chamber orchestra from the piano.

“When we first started out, we considered performing just the first act, but Christopher got involved and said, ‘No way! We’re putting on the whole show,’” laughs Vickerd.

Like many Broadway shows, Into the Woods has a junior version which ends with a Happily Ever After for all of the characters. The students, however, were eager to explore the characters’ darker sides that are only revealed in Act II of the original version.

“Everybody is an adult here. We’re either professionals or are learning to be professionals, so we’re not putting on a high school production,” states Gaudreault. “And at this point, everything is coming alive very quickly.”