REVIEW: of The Anchoress, a world premiere of a new musical monodrama/song cycle composed by David Serkin Ludwig with text by Katie Ford, performed by soprano Hyunah Yu, accompanied by saxophone quartet PRISM and ancient-instrument ensemble Piffaro; on Wednesday, October 17, at the Perelman Theatre of Philadelphia’s Kimmel Center, and on Thursday, October 18, at New York City’s DiMenna Center for Classical Music (the latter performance reviewed here); and 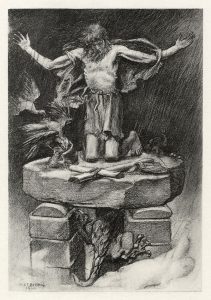 The impulse to retreat from the world in search of spiritual insight or purity has manifested throughout human history. Twenty-one centuries of Christianity have seen it channeled into a variety of social forms – the proliferation of well-known monastic and cloistered communities.

But an entirely more rigorous and exotic strain of loner exceptionalism arose, too, fostered by the examples of such conspicuous early figures as the third-century Saint Anthony the Great (who spent 13 years contending with Satan alone in the deserts of Egypt), or the even more mindboggling Saint Simeon Stylites (whose final 37 years were lived in the Syrian wilderness perched atop a stone pillar).

Followers in this tradition are the “anchorites” (from the ancient Greek “to withdraw”) who embraced a fiercely solipsistic isolation – a virtually black-box retreat into a mystic binary system of self-alone-with-God.

To the modern, secular mind, it may seem a perverse choice – more masochistic than mystical. But by the 13th Century, there were many hundreds of anchorites throughout Europe. And, even more intriguingly, the great preponderance of them were women – 4 to 1, according to poet Katie Ford.

In The Anchoress – the new monodrama with music by composer David Ludwig and text by Ford – the inner life of one such woman is explored and given potent, fascinating voice.

“I could be bounded in a nutshell, and count myself a king of infinite space,” says Shakespeare’s Hamlet. It might almost serve as a caption to the life of an anchoress. (Not to mention that it surprisingly parallels an earlier sentiment by the most famous of medieval anchoresses, Julian of Norwich, who reflected piously on God having “showed me a little thing, the quantity of a hazel nut.…”)

As Ford explains it, the great run of medieval women had essentially four life paths available to them: marriage (which entailed “‘constant, dangerous pregnancy”); prostitution; servitude; or the convent. 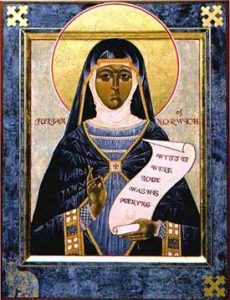 A fifth way, however, was offered to those of the right temperament by the “anchorhold” – the term for the small cell adjoining a church into which, following an extraordinary reading of the Rite of Christian Burial, an anchoress was permanently immured, sealing her in a kind of pious, living death. She might observe mass through a small opening called a “squint,” and she could converse of spirtiual matters with outsiders through a narrow slit in the cell’s wall. But such communications were regarded as effectively coming from beyond the grave.

“I was raised in a Norwegian Lutheran heritage,” Ford explains. “Socio-politically progressive but very steeped in Scandinavian traditions.” She also studied at Harvard Divinity School.

Composer Ludwig, on the other hand, was raised a Quaker, but also has Jewish roots on both parents’ sides. “Om my father’s side they were Russian Jews,” he explains. “And people on my mother’s side fled Nazi Germany.”

Not surprisingly, then, The Anchoress (to date the third and, as Ludwig puts it, most “evolved” of his and Ford’s collaborations), while deriving from a very Catholic cultural matrix, is polyvalent in its perspectives and objectives. Ford began the underlying cycle of eight prose poems five years ago, subtitling them “Translations”; and, indeed, at first blush, the reader might be forgiven for assuming them to be highly literary adaptations of actual “found” medieval texts, an impression enhanced by the presence of lacunae – missing text where the continuity of the anchoress’ voice falls away.

It’s a stunning bit of poetic legerdemain and literary imposture.

But are these blanks meant to be mere accidents of time and disintegration?  Not for Ford.

“Words have been edited out by some higher authority,” Ford says of her imagined origin for the missing text. “They are redactions. I wanted the anchoress to represent argument.” 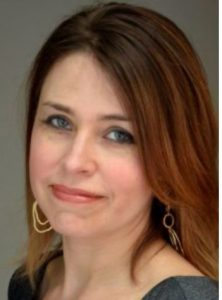 In fact, Ford is highly invested in a certain disorienting spiritual epistemology in which the mind is content to dwell in that fertile, liminal space between knowing and believing; and the anchoress becomes Ford’s historical stand-in, asserting this view retrospectively to a more patriarchal and “normative” world.

“I think it’s a deeply  reverent state,” Ford says of her anchoress’ prophylactic agnosticsim, noting that it’s akin to what the poet Keats called “negative capability.”

“I wanted her doubts to be subversive toward the normative thinking, so she could advance toward a more developed spiritual idea of not knowing.”

Thus, Like Hamlet troubled in his nutshell by “bad dreams,” Ford’s fictitious anchoress has recorded in these, her subsequently mutilated texts, her own intimate, highly pressurized insights, dreams and visions – all of which are construable as challenges to orthodoxy and thus deserving of redaction.

The dramatic tension between the anchoress’ textual diary of reverent doubt and the censorious acts of textual vandalism represented by the “redactions” is one of the most distinctive and engaging aspects of The Anchoress.

Composer David Ludwig’s setting of The Anchoress boasts myriad felicities. Perhaps primary among these is his choice of orchestration. There is almost certainly no direct precedent for Ludwig’s combining of a suite of historical, Renaissance-era instruments (here played by the accomplished Piffaro band) with a quartet of modern saxophones (the members of PRISM), but it proves to be a canny and spot-on correlative to Ford’s synoptic reading of fictitious antique text and contemporary sensibility. 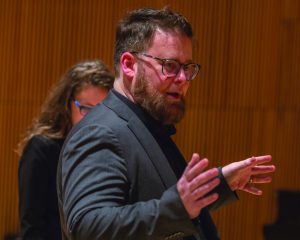 “If the whole idea of the piece is the meeting of contemporary and ancient language and concepts,” Ludwig explains, “I wanted to bring contemporary techniques next to a very medieval sound world.” And, in fact, Ludwig’s mixture of the two heterogeneous aural profiles is not only a marvel in itself; it also stands, in effect, as an overarching metaphor for “redaction” in its own right – pre-classical dulcian and sackbut and krumhorn and theorbo on one side, and post-classical saxophones on the other, omitting and thus “redacting” classicism in the macroscopic structure of the piece itself.

Then, there is Ludwig’s inspired way of handling Ford’s localized redactions, on the text-setting level.

“I consistently chose to set those moments not with silence, but with the opposite,” Ludwig explains. “They are moments of chaos, drowning out the singer, like an authority will drown out the voices of those who challenge it.”

Specifically, Ludwig has scored a shuddering “Taser”-like effect with his battery of saxophones, blasting the anchoress at each juncture where she threatens to veer toward heterodoxy (as when she seems about to counsel a visiting woman afflicted with bodily growths that the Resurrection may itself be more metaphor than historical reality, poised to cite the ambiguity of the Epistle of St. James, just before Ludwig’s “chaos” mutes her).

Ludwig’s is a compositional voice of self-evident sincerity and authenticity. Deeply appreciative of the sensibility and technical resources of his players, he spent hours of preparation conferring with Piffaro, learning the nuances of the esoteric instruments they ply with such authority (“They worked with me very closely,” Ludwig says), and it shows. Moreover, Ludwig’s writing for the saxophone choir PRISM is a revelation of that instrument’s underappreciated, protean capabilities. In the course of The Anchoress, saxes are afforded the opportunity to venture into sonorities bordering on the litheness of flute, the ligneous warmth of clarinet, and even the anthropomorphic warmth of violin, not to mention deploying certain extended, polyphonic techniques.

The Song Will Out 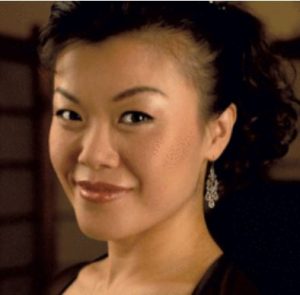 The role of the anchoress was sung by soprano Hyunah Yu with consummate poise, authority and charisma. Standing center stage, at the head of a tight rectangular space marked out by empty music stands, cleverly suggestive of the anchoress’ cell (or her grave), Yu’s pliant yet precise negotiations of Ford’s exacting and evocative diction and Ludwig’s eloquently sculptural vocal lines and rhythmic complexities were exemplary. (And Yu’s spectacles, incidentally, added just the right nuance of pert and endearing bookishness to  the role’s fervid introspection.)

The New York premiere of The Anchoress at the DiMenna Center on October 18 was the post-intermission high point of a concert that also featured performances of several other engrossing, medieval-tinted pieces by Ludwig, as well as a performance of Ludwig’s and Ford’s gripping 2012 protest art song, “Our Long War.”

A commercially available recording of The Anchoress is reportedly in the offing.

Further information on The Anchoress and its creators is available at www.davidludwigmusic.com/anchoress; and www.fordkatie.com. 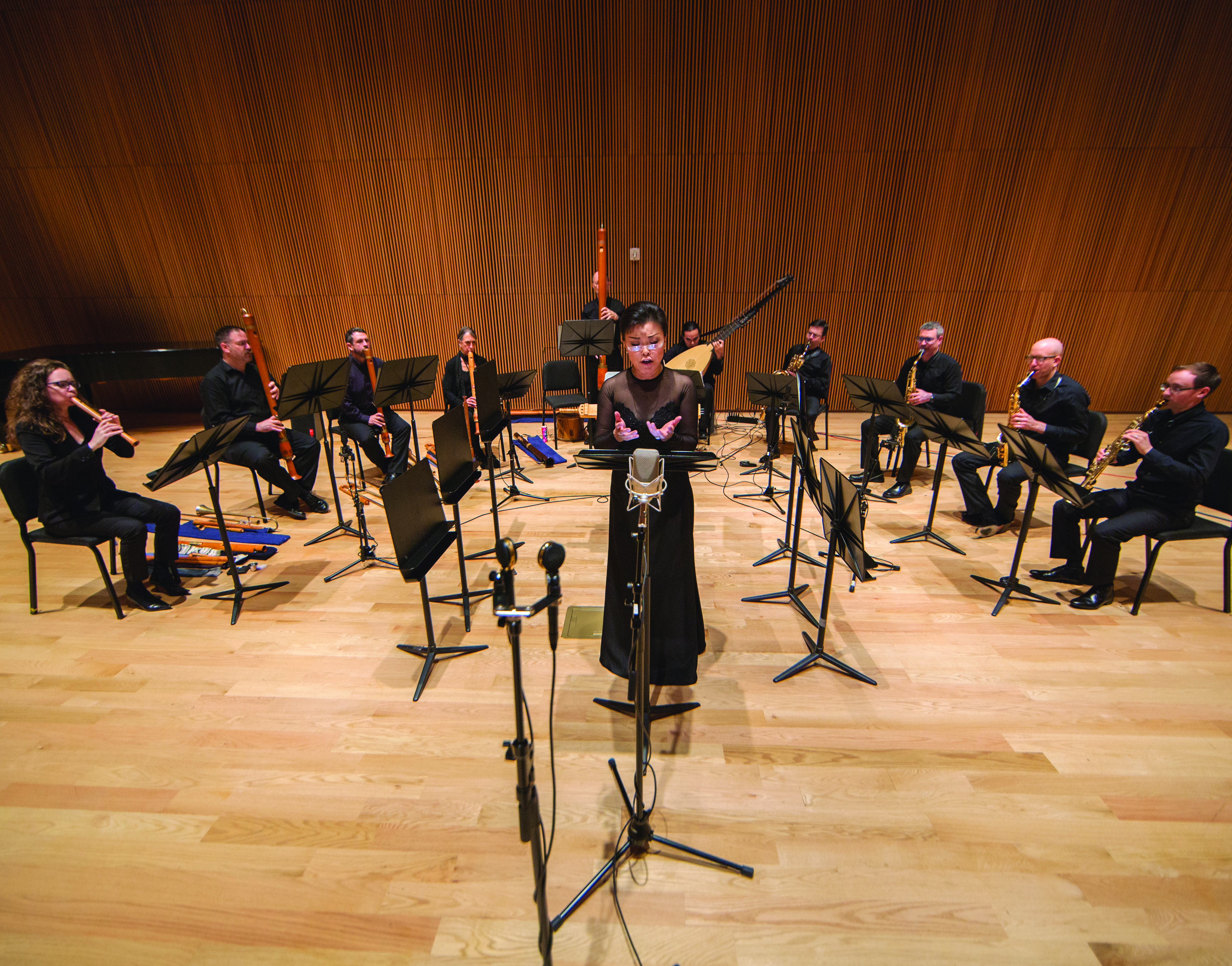