You are at:Home»Arts Industry»New York City October Surprises: Lang on the High Line, Kallor in the Catacombs
Advertisement / Publicité

REVIEW: of works by composers David Lang and Gregg Kallor – The Mile-Long Opera by Lang, performed on the High Line; and sketches from The Frankenstein Suite, plus the monodrama “The Telltale Heart,” by Kallor, performed in the Catacombs of Brooklyn’s Green-Wood Cemetery.

Some uncanny musical surprises graced unusual locations both above and below New York City street-level during the early part of Halloween month. 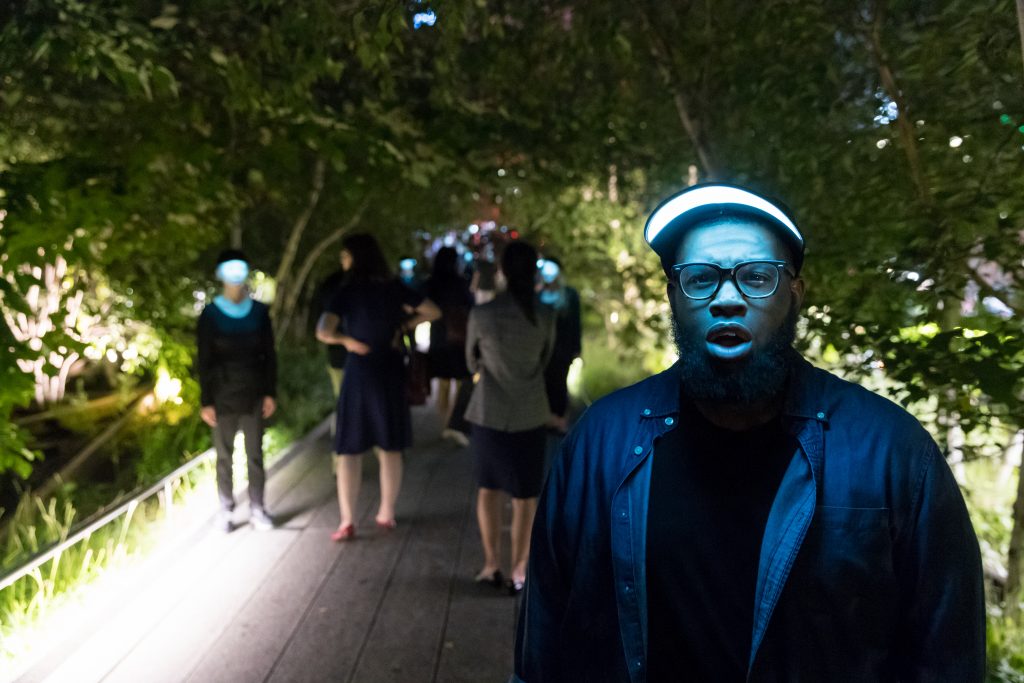 Beginning at twilight on six consecutive evenings (October 3 through 8; viewed October 7), Pulitzer-Prize-winning composer David Lang and a host of collaborators presented a unique choral experience along Manhattan’s High Line. The Mile-Long Opera (subtitled “a biography of 7 o’clock”) deployed the vocal talents of some 1,000 performers recruited from across the city in a crepuscular journey through the inner life of ordinary city dwellers. The cumulative effect was to disclose just how extraordinary it can be – poignant, poetic, titillating, and even cathartic – to listen intimately to even the most mundane of shared urban experiences.

Created from the skeletal remains of a long-abandoned, elevated spur of the New York Central Railroad, the High Line is a rightly celebrated piece of 21st-century New York City landscape architecture, greenway and pedestrian park. And while there is still quite a bit of Manhattan to the park’s west before city meets river, there is an undeniable sense of the liminal in walking the park’s suspended paths – a feeling that one is at a verge, more psychic than geographic, where urban life abuts and begins to merge back into nature.

It was exactly this sense of subtly interpenetrating realms – reified pavement consciousness etherealizing into liberated city mind – that was captured and reflected by the intoned and echoed chants of Lang’s mile-long, a cappella odyssey. 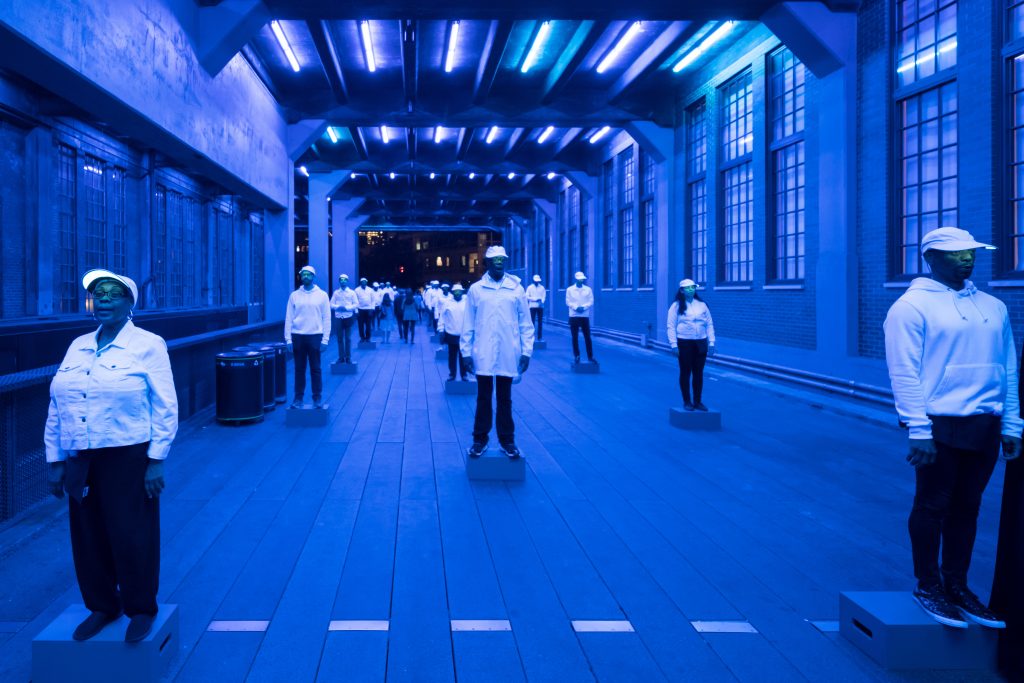 One entered at the High Line’s Gansevoort access point, and from there was directed to proceed north at one’s own pace along the length of the park, which terminates at 34th Street and the newly renovated Hudson Rail Yards. Along the route, performers were stationed every few steps, dressed mostly in black, their faces mostly illuminated by eerie and wonderful luminous ball cap visors.

Texts sung along any give section of the walkways were repeated ad libitum from singer to singer; new texts were introduced at later junctures, or earlier ones recurred just as they had begun to recede in the walker’s mind. An initial choral anatomy lesson informed audiences that, as twilight descends, a human’s ocular rods and cones switch over to the functioning of the evolutionarily oldest portions of the eye.

The density of singer groupings swelled and diminished with the widening or narrowing of the parkway’s varying spaces. At one point, a cacophony of marriage proposals arose spookily from singers placed below the pedestrian causeway. 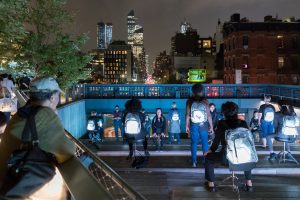 Lang’s vocal music (as more rigorously demonstrated in other of his distinctive works such as anatomy theater or his Pulitzer-Prize-winning the little match girl passion) is rhythmically arresting, and eschews melodic ornateness in favor of idiomatic clarity. When Lang sets a phrase, its sound and sense have a way of sticking with the listener.

Along with a cumulative awe at the enormity of the undertaking, the Mile-Long Opera engendered surprisingly intimate participatory stimulations; one became unexpectedly aware of oneself as eavesdropper, voyeur, and even secret sharer in a collective poetic project, one with the aggregated striving souls whose blended musics compose the city itself, out of an infinity of mundane human things.

The Mile-Long Opera, by composer David Lang (with texts by poets Anne Carson and Claudia Rankine based on “the personal stories of hundreds of New Yorkers”), performed on the High Line from 7 to 10 p.m. on October 3, 4, 5, 6, 7 and 8, 2018; it was co-conceived by Lang and architects Diller Scofidio + Renfo (DS+R), and co-produced by DS+R and the High Line. 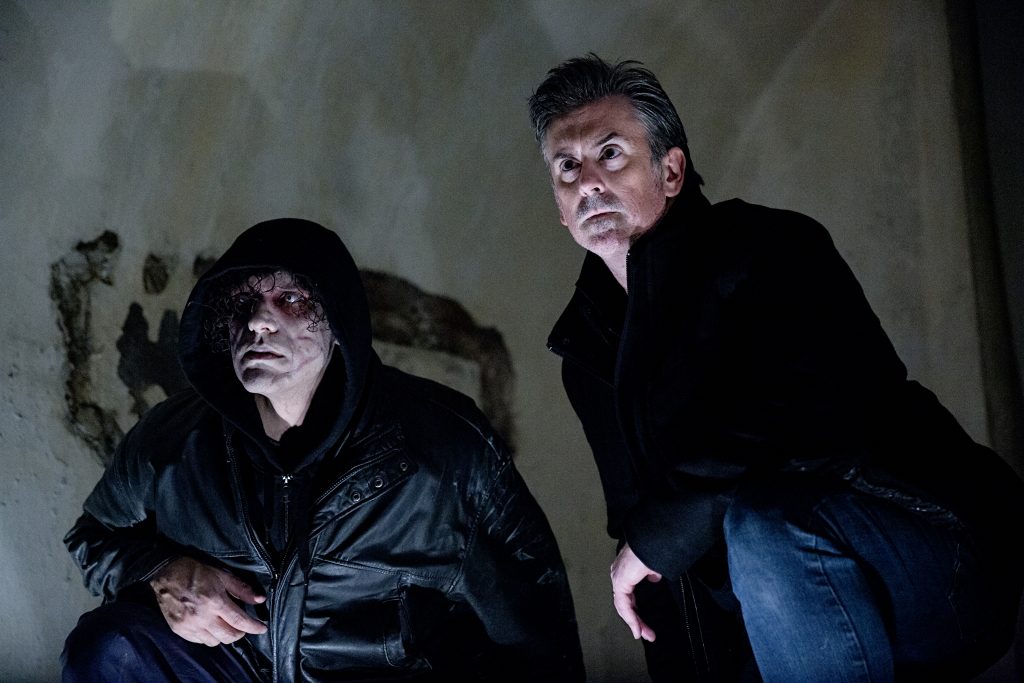 Brooklyn’s Green-Wood Cemetery is among America’s first and still most magnificent parkland burial grounds. Departing from centuries of somber graveyard aesthetic, Green-Wood’s 478 acres of triumphal monuments, pond-studded landscape and winding walkways were once a North American tourist attraction second only to Niagara Falls, and are said to have inspired the designs of New York’s Central and Prospect Parks.

But it is still a cemetery, and capable of stirring the hippocampus to its primitive mixed fascination and dread of all things to do with death.

Green-Wood also boasts its share of hidden secrets – one of which is its rarely seen “Catacombs.”

It was in that strange and remarkablly apt space that producer Andrew Ousley’s companies The Angel’s Share and Unison Media presented a mind-expanding evening of neo-gothic theatrical delight: composer Gregg Kallor’s excerpts from his Frankenstein Suite, along with his one-act monodrama setting of Poe’s “The Telltale Heart” (October 10, 11 and 12; viewed October 11).

One might well guess that based on concept alone, such an event would sell-out – and sell out it did. But the evening had so much more to commend it than just concept. The combination of producer Ousley’s impeccable and classy attention to detail and composer Kallor’s sterling artistry and riveting sense of theater made this October journey to Hell and back an experience to savor.

Before descent into the Catacombs, the program boasted a pre-show whiskey-tasting reception “overlooking the Manhattan skyline.” Those receptions were reportedly held outdoors on the first and third evenings of the run, as the weather those nights permitted the advertised skyline view. On the evening viewed here, however, attendees were advised that, due to a delightfully apposite drizzle and fog, all whiskey would be sampled indoors instead – at the crematory.

Entering Green-Wood’s grandiose entrance gates in a damp October twilight and soliciting directions to a crematory was like nothing so much as walking into a vintage Hammer Horror film. 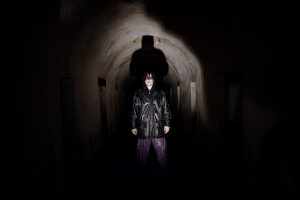 Actually, the crematory itself (at least the families-and-friends portion where the reception took place) proved to be an inviting, quasi-Prairie-Style salon. And the assortment of sponsored whiskies were quite bracing.

Thus primed, trolleys transported audience along the winding half-mile through Green-Wood to the entrance of the Catacombs, which turn out to be an early underground Green-Wood facility that presumably accommodated interments at a different price-point from that associates with the elaborate above-ground mausoleum scene.

The Catacombs themselves consist of one long, austere, vaulted corridor (several hundred feet from end to end) off from which a host of niches open at every 20 paces or so, both left and right, many with inscriptions above their arched entries, bearing the names of old New York dynasties.

Discreet theatrical lighting and an illusion of ghastly lantern light struck a perfect surreal tone, and one could not help but gape at the gorgeous, full-sized Yamaha concert piano that somehow had been installed at the far end of the Catacombs, in front of a raised, rustic-looking wooden performance platform.

A sustained atmosphere of macabre carnival anticipation was palpable. Then, with composer Kallor at the piano and his longtime performance collaborator Joshua Roman at the cello, the world premiere of Kallor’s Frankenstein Suite came to life.

The clarity of diction was exemplary. Moreover, the high-grade acoustic geniality of the Catacombs proved stunning. While obviously never intended for the accommodation of living voices, the space nonetheless seems to function as a serendipitous parabolic amplifier, due no doubt in large part to the almost fractal repetition of vaulted structures that characterize the site. 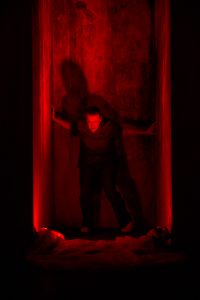 Mezzo-soprano Jennifer Johnson Cano as the protagonist of Poe’s “The Telltale Heart,” composed by Gregg Kallor; presented by The Angel’s Share; photo by Kevin Condon

Kallor’s music is many good things: intelligent; unapologetically theatrical; emotionally evocative; virtuosic yet sensitive in its texturing.  It is tonally coherent without overt predictability, accessible without banality. Kallor consistently provides precisely calculated support to his vocal lines, while also giving them temporal and contrapuntal space in which to work their condign effects.

Kallor’s music might be classified as artistic theatrical jazz, constructed as it is with beguiling plasticity of lyric contour riding over, or embedded within, lusciously interlaced and tastefully embellished polychords.

Following an interlude (during which Kallor performed a technically impressive Leonard Bernstein piece, for the double reason that 2018 is Bernstein’s centenary, and that Green-Wood bears his remains), mezzo-soprano Jennifer Johnson Cano delivered an intense and fully engaged performance of Kallor’s setting of “The Telltale Heart.” It was a tour de force, admirable for both Cano’s vocal and dramatic handling, and Kallor’s evident depth of insight into Poe’s exquisite proto-Freudian tale of narcissism, psychosis, and guilt.

It is said that Kallor next wants to write something comedic. He’s earned that.

Sketches from The Frankenstein Suite (world premiere), and “The Telltale Heart” were composed by Gregg Kallor, directed by Sarah Meyers, with lighting by Tláloc López-Watermann, and costumes by Fay Eva. Information on future events presented by Andrew Ousley’s Unison Media, Crypt Sessions and Angel’s Share can be accessed at www.deathofclassical.com.