Last May, Emily Oulousian won the grand prize of the CBC Radio-Canada show Virtuose, produced and hosted by the ever-popular Gregory Charles. Oulousian was awarded an almost perfect score of 97.6 for her performance of an excerpt of Grieg’s Piano Concerto – without orchestra. She was only 15 years old.

In the episodes leading up to the grand finale of the competition, Oulousian performed brilliant renditions of Prokofiev’s Toccata in D minor, Op. 11 and Scriabin’s Étude in D-sharp minor, Op. 8, No. 12.

A native of Montreal, Oulousian, whose mother is of Chinese descent and father is of Armenian descent, started studying piano at the age of five. In primary school, she even received a grand piano as a birthday gift. She also admitted, during the course of the taping of Virtuose, that she hated the piano at first. Today, however, there is no doubt about her love of the instrument, although she is also considering medical school. 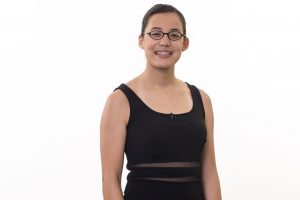 “Most of the time, I practice about six nights a week,” she said in an interview that aired on the show’s website. “For me, it would be very difficult to stop playing the piano. My mother told me that if I went into medicine, I would have to stop playing the piano – or play less – but I cannot see myself stopping. Thus, I set a goal to continue to play the piano at the same time I study medicine if I am accepted.”

Even with her busy schedule, Oulousian is also active as part of her school’s athletic team. She trains Monday and Wednesday mornings 7 to 9 AM, while on Saturdays she spends the day in Chinese school to learn the language. According to her father, she is very disciplined. She goes to the Conservatory to practice the piano for at least two hours a day. She goes to school at Collège Jean de la Mennais.

Oulousian was a student of Angela Chan and Wonny Song at the Lambda School of Music, which she attended for four years. In 2014 she joined the Conservatoire de musique de Montréal, where she studied with Richard Raymond. She has participated several times in the Canadian Music Competition, each time making the finals. In 2015 she also won the “Senior Champion” title at the Concours de musique classique de Montréal.

“I submitted an application to Virtuose because I found the prospect of a classical music television program to be intriguing. Normally we have all these things like American Idol for pop musicians and dancers. You rarely see classical music, so I really wanted to be part of the project,” she said in an interview on CBC Music.

Virtuose will have a second season. The recording will resume October 19 to 23 and the 7, 8, and 27 of November. If you make a reservation, it is possible to attend the recordings. www.publiccible.com