It might seem odd to nominate a concert in the Maison symphonique as the operatic event of the year so far, but such was the evidence that reached the ear on Oct. 25 and even, to some extent, met the eye. Beethoven’s Fidelio as performed by the Orchestre Métropolitain with a near-dream cast assembled by the Opéra de Montréal (and doubtless ratified by Yannick Nézet-Séguin) offered opera enthusiasts nothing to deplore in an age of directorial monkey-business and a great deal of intuited action to applaud.

Before discussing the many musical virtues of this outing, I should report on how long a way a little can go when drama is confined mostly to facial expressions and a few shifts of position near the apron of a well-lit stage. At least if the singers embody their roles as precisely and passionately as did these. When tenor Michael Schade as Florestan in concert dress entered stage left, with an unsteady gait, we understood perfectly the disorientation of a political prisoner who has been confined to a dank cell and fed minimal rations. We saw the despair in his manner and heard it in both the realism of his vocal acting and the heroic intensity of his tone.

Beethoven’s orchestral introduction, so evocative of darkness, did not hurt. One of the glories of this night was the extent to which we were reminded of the composer’s power as a sonic scenographer. Even the uncovering of a cistern to prepare a grave – an action that unambiguously involves people doing something on stage – was paradoxically vivid with the music providing the visual stimulus. There could be no slow emergence of the prisoners from their cells into the sunlight, but a subtle illumination of the choir loft, along with the softly expressive sound of the men of the OdM chorus, conveyed well enough the essence of one of the humanitarian highlights of all opera. 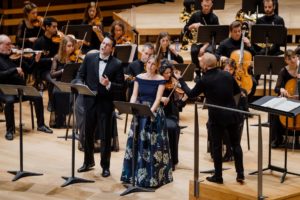 Now about that cast. The 32-year-old Norwegian soprano Lise Davidsen in the title role earned the biggest bravos for her stage-shaking vocalism but I am not sure that Kimy McLaren was any less effective in the lyric role of Marzelline. Bass Raymond Aceto was rich-toned as the jailor Rocco but also funny and humane. And such a good actor! His fellow American, the bass-baritone Alan Held, was equally resplendent in the supporting role of Don Fernando. If the Italian bass-baritone Luca Pisaroni did not summon quite these decibels as Don Pizarro, he projected well and acted the villain to perfection. Tenor Jean-Michel Richer, another good actor, sounded (along with McLaren) a little withdrawn as Jacquino in the opening scene but balances were soon rectified.

Fidelio is a number opera, and numbers get applauded. One might suppose the interruptions to be unwelcome, but audience enthusiasm somehow enhanced the drama on stage. The jury is still out on whether the Leonore Overture No. 3 – arguably the greatest of all overtures – adds too much ballast to Act 2, but the crowd fully endorsed the interpolation. And no wonder, with an eloquent flute solo, crisp trumpet calls and incisive strings. Horns were rightly given a bow after Leonore/Fidelio’s “Abscheulicher” recitative and aria. 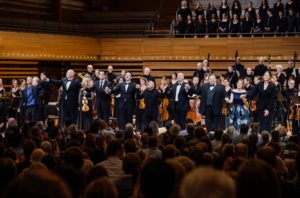 In a way, the Leonore Overture No. 3 problem was solved by a finale that rivalled the closing pages of the Ninth Symphony in sheer joy. Of course, Nézet-Séguin deserved a large share of the credit for a performance that was charged throughout with symphonic vitality. He often seemed one of the cast, conducting from the centre of the stage with his customary athleticism. This was not the first opera in concert in the Maison symphonique; Kent Nagano in the big-budget OSM years led Tannhäuser, Tristan und Isolde, and most memorably, Saint François d’Assise. But for many in the crowd this Fidelio represented a breakthrough. One must assure that discussions between the OM and the Opéra de Montréal on their next collaboration have already begun.