PRAGUE – Very strange. The knights and nobles were dressed in stylized medieval tunics and standing in orderly semicircles. When Lohengrin arrived, an alluring image of a swan appeared between two handsome panels of intertwining ivy. When Lohengrin did battle with Telramund, the combatants wielded realistic broadswords.

This was a production from Bayreuth? Yes, from the Bayreuth of 1967, before the title character of Wagner’s opera was understood to be an electrician, as in the Lohengrin unveiled this past summer, or the citizens of Brabant were understood to be rats, as in the version premiered eight years earlier.

We have come a long way since 1967 – downhill. And while this fascinating time-capsule recreation in Prague of a vintage Wolfgang Wagner production reminded us of how much in integrity has been lost, it did have longueurs that could not be attributed to the performers alone. 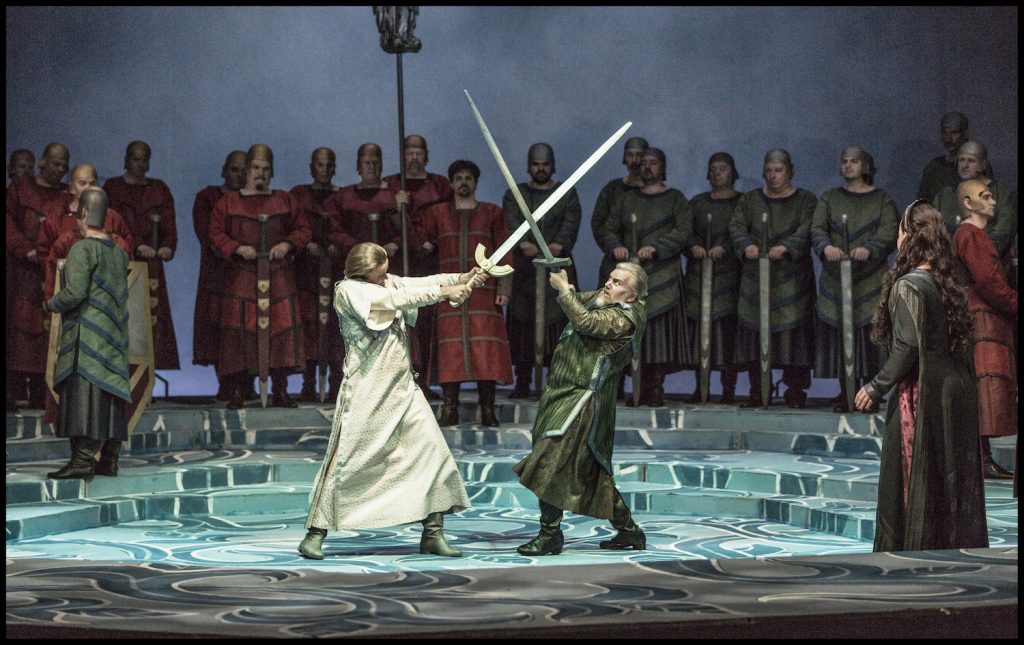 Some explanation: Wolfgang Wagner took control of Bayreuth after the death of his brother Wieland in 1966. It was already said in the prior decade that Wolfgang was less talented and more inclined to stolid, orderly blocking and minimal stage expression.

As straightforward as Wolfgang (1919-1990) was as a director, he nevertheless opened the doors of Bayreuth to the visiting directors who turned the summer festival into a freak show. He also bequeathed the direction of Bayreuth to his daughter Katharina Wagner, who organized and oversaw this heritage reconstruction in the National Theatre of Prague as a tribute to her dad.

To say Wolfgang’s legacy is mixed is putting the matter mildly. To say the effect of the performance of Nov. 7 was mixed is putting it fairly. The story was clear, the sets were symmetrical, the costumes were colourful in a 1960s way. With his pearly white tunic, Lohengrin was unambiguously heroic.

Darkly-draped Ortrud and Telramund were just as clearly on the other side of the moral ledger. King Heinrich, in red, looked regal. There were no confusing socio-politico glosses or special directorial effects to decipher (apart from a bit of hanky-panky, easily overlooked, connected to the arrival in the final minutes of Gottfried).

All of which should have put me in a good mood. But in the midst of Act 1, I began to wonder: Can there be too little of a good thing? This staging was as close to oratorio as opera can get. Much of the movement that did unfold – Telramund stepping forward to make his false charge, Elsa bowing to pray for the arrival of the Swan Knight – could have been achieved with equal effect in a lightly blocked concert performance.

More charismatic figures at the centre of the story might have made amends for the inertia. Tenor Charles Kim comported himself nobly but produced a steely, unvaried tone. Soprano Edith Haller was having a rough night, with an edgy sound and a couple of high-range misfires.

Much stronger were the baddies. Baritone Thomas Johannes Mayer was a three-dimensional Telramund, frustrated by both his stalled political career and subservience to his wife, Ortrud. Mezzo-soprano Eliška Weissová, who sang this role in the premiere of this restaging last year, was in bright, fearsome voice. Baritone Thomas Johannes Mayer as the king proved to be a more formidable vocalist than his herald, bass Vladimír Chmelo.

The duets of Act 2 made their effect, but the wedding processionals were so slow-moving that the rude intrusion of Ortrud came as a relief. The National Theatre Chorus and Orchestra made handsome sounds under Constantin Trinks. Backstage and offstage fanfares were acoustically apt. Voices in this wonderful house never seemed lost in the mix. My only disappointment was with the slightly scrappy treatment of the rousing Prelude to Act 3.

Great care was taken (through archival photos and contemporary notes) to replicate the original production, even if the sets needed to be trimmed to fit the National Theatre (which, grand and gilded as it seems, is not an especially large facility). Possibly the conception would seem stately rather than static in the Festspielhaus. This was a noble and dignified Lohengrin but not quite the worth-crossing-the-Atlantic experience I had anticipated.