Why, people have been asking for about 120 years, is Rachmaninov so popular? The music is morbid to miserable, the melodies are unhummable and mere finger virtuosity does not explain the infallible and inexhaustible attraction. Rachmaninov remains a frontline bestseller. What does he have that Scriabin, say, lacks? 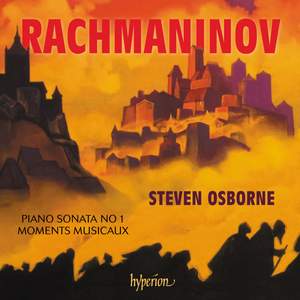 We ask the questions (as they say in war films); don’t look for instant answers. But a new release by the introspective Scottish pianist Steven Osborne has set me thinking hard about the hidden irresistibility of the first piano sonata and the shameless populism of the Moments Musicaux.

The sonata, dated 1907 and seldom heard in live performance, has an earworm central movement that anticipates the Beatles’s Yesterday – not just the three-note signature motif but a distinct hint of the next line ‘all my troubles seemed so far away.’ Did Paul McCartney perhaps hear it when he was living with Jane Asher, whose mother was a Royal Academy of Music professor? Rachmaninov, for his part, embeds the tune deep in the recesses of the listener’s brain.

The Moments, opus 16, were written as a kind of instant cash machine after Rachmaninov was robbed on a train. Unlike Schubert and Chopin, two obvious influences, there is no overt appeal to sentiment. Rach writes miniatures that a publisher will buy sight unseen and a decent amateur can play at home. The practicality and professionalism of these pieces is covered over by the subtlety of Osborne’s deft and immersive interpretation. The 3rd Moment, in B minor, is one to savour for years to come. I wish I had a sixth star to award.