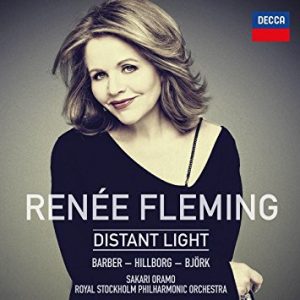 I hope this is not Renée Fleming’s final record. The American soprano, in her late 50s, is closing her stage career with the voice unblemished and the memories fond. It would be a pity if her legacy on Decca was to be concluded by this album, which plays to all her weaknesses.

Samuel Barber’s lyric rhapsody Knoxville: Summer of 2015 requires a rich soprano voice and a capacity to articulate James Agee’s achingly nostalgic English text. Ms Fleming has the first quality. Pronouncing the words has never been her forte. The best ears will strain here to catch more than one in five.

The Swedish composer Anders Hillborg wrote The Strand Settings with this singer in mind. The suite has some engaging textures, couched in a congenial post-modern idiom. What this music needs is bite, and neither the singer – never one for contemporary stuff – nor the orchestra (Royal Stockholm Philharmonic, conductor Sakari Oramo) can supply it. What we hear is a twenty-minute wash of generally inconsequential sound.

With barely half an hour recorded, Ms Fleming’s idea of an encore is to deliver arrangements of three songs by the Icelandic vocalist Björk. Bad idea: Björk does them more effectively – more colour, more penetration, even more beauty. This short album cannot end soon enough.