Covid has been cruel to rising composers. Two years out, with theatres shut and managements unwilling to commit to new work, is equivalent to having to start all over again. Many, lacking the fight, have fallen by the wayside.

Nico Muhly, now 40, had his first opera, Two Boys, staged at English National Opera and the Met a decade ago. It was the first opera to engage with social media, taking place both on stage and on phone screens. Its successor Marnie, based on the Alfred Hitchcock film, was something of a narrative regression but the Met streamed it for free through Covid to keep the work alive and Muhly has continued to produce.  His metier embraces post-Britten Anglican hymnody and post-Philip Glass movielike minimalism. Fusion it may be, but it is entirely his own. 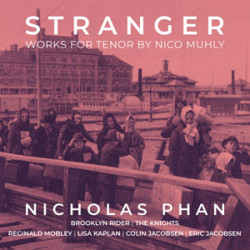 This new album of three works for tenor and small ensemble is where Muhly feels most at home – telling stories in clearly articulated English with a strong rhythmic propulsion and a distinct social agenda. The title track harnesses formative cultures of American immigration. ‘Lorne Ys My Likinge’ reimagines a 19th century Chester Mystery Play. ‘Impossible Things’ is a cycle of Cavafy poems.

All three works inhabit a stylistic limbo, waiting for the next big thing to happen. Muhly offers quiet empathy more than overwhelming emotion, which may be just right for this interim moment. The half Chinese-American tenor Nicholas Phan claims to find more self-identity in this music than in any other. Brooklyn Rider are the backing group. I’m left eager to know what Nico Muhly will do next.