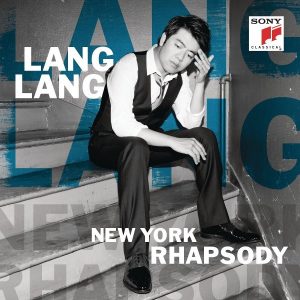 I am not the right person to be reviewing this album, but then I’m not sure the right person actually exists. This is a Sony crossover project that falls smack between the tracks. How does one rate it on a scale of one to five?

Obviously five stars for production. This is a six-digit concept album involving dozens of round-table meetings, the top recording crew, best designer, photographer, makeup artist, go-fer. The cover shows Lang Lang sitting apparently exhausted on the steps of a nightclub. We’re not quite sure it is Lang Lang since there is no sight of the entourage that went into the making of this album, but we’ll take it on trust.

Unfortunately there is very little to be heard of Lang Lang on the album. The producer is called Larry Klein and he plays ‘keyboards’ on most of the tracks, which are arrangements of staple pop songs, bookended by two fragments of Aaron Copland.

The only sign of Lang Lang is in a rare performance of the two piano and orchestra version of Rhapsody in Blue. The second pianist is Herbie Hancock, which must have seemed a good idea on the drawing board, except that Lang Lang plays a Steinway and Hancock a Fazioli and the aural contrast is, well, quirky. The orchestra is the LSO, which seems odd on a New York-themed album and odder still when their sound is tweaked to make it indistinguishable from any band on earth. Is that really Andrew Marriner on the opening clarinet glissando? Impossible to know as he isn’t credited. Orchestral playing on the rest of the album was done by Budapest studio musicians. Some bits were polished off in Nashville and Manchester, England. How New York is this album? About one star’s worth.