The NEM will present its international young composers forum from November 2 to 25 in collaboration with the Université de Montréal music faculty. The forum involves a variety of activities, including public rehearsals, workshops, conferences, and cultural mediation with youth. Young people will have the opportunity to meet the eight participating composers. Under the direction of Lorraine Vaillancourt, the NEM will perform four works by young composers (Salle Claude-Champagne, November 24 and 25, 7:30PM). A round-table discussion will take place before the second concert with members of the international jury. (in French only) www.lenem.ca

I Musici and Mozart: L’Apothéose

Symphonies no. 39, 40, and 41 are undoubtedly a high point of the classical repertoire. The three symphonies seem to have been conceived as a whole – a vast triptych Mozart used to lead the symphonic genre to new heights. The composer’s last three symphonies will prove to be a memorable musical experience (Bourgie Hall, November 24, 8:00PM). www.imusici.com

Café Zimmerman is one of the top-ranked baroque ensembles in Europe and will present an evening of music featuring two cantatas and an afternoon musical garden party (November 26 and 27).
The Bach Festival has put together an exceptional project: five organs for five organists – Paul Jacobs, Olivier Latry, Jean-Willy Kunz, Isabelle Demers, and Christian Lane. Works range from Bach’s Concerto for Four Organs to Ravel’s acclaimed Boléro (November 22).
Many ensembles will present original programs, including a performance by Ensemble Caprice of the Italian Concerto for recorder and strings arranged by Matthias Maute (November 23), a concert featuring Iranian American harpsichordist Mahan Esfahani and Les Violons du Roy under the direction of Mathieu Lussier (November 25), and a performance of the Brandenburg Concertos by the McGill Chamber Orchestra (November 29).
www.festivalbachmontreal.com 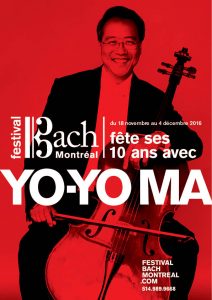 Romantic Russia and the OM

Orchestre Métropolitain conductor Yannick Nézet-Séguin illustrates the Russian soul through Borodin, Stravinsky, and Rachmaninoff. The three extraordinary soloists are soprano Nicola Beller Carbone, tenor Dimitri Pittas, and baritone Hugh Russell. The Polovetsian Dances by Borodin and Petrushka by Stravinsky are infused with exoticism, lyricism, and energy. Rachmaninoff’s Bells is a symphonic poem after Edgar Allan Poe, representing an expression of human destiny. The third movement appears to presage the First World War, which broke out a year after its composition (Maison symphonique, November 27, 3:00PM). www.orchestremetropolitain.com