Finalist for the Prix Michel-Tremblay (2019), finalist for the Grand prix du livre de Montréal (2021), Okinum is autobiographic: “Okinum is dear to me, it is my first play, the birthing of my voice as a theater artist,” confides Émilie Monnet.

Inspired by the recurring dream of a giant beaver, Okinum is an intimate reflection on the notion of inner dams, a tribute to the power of dreams and intuition. The liberated speech flows up the rivers of the forefathers’ memory to heal and reconcile the different identities of the author and performer.

The First Nations artist addresses her experience of throat cancer, high symbol in regard to the silenced voice of Native women, and the difficult learning of the language of her ancestors, Anishinaabemowin – two painful legacies of colonialism.

BETWEEN HISTORY AND CURRENT EVENTS

“The opportunity to do the show in English, in collaboration with Centaur and Imago, arose immediately after the show’s premiere at the Centre du Théâtre d’Aujourd’hui (2018). The National Arts Centre’s Aboriginal Theatre in Ottawa also showed a lot of interest,” says Émilie Monnet. It was time to dive back into the reflections that animated Okinum, and a new version was born in the fall of 2019.

“This text still resonated with me and I wanted to see how a reincarnation of the  show would answer new questions about the collective story.” Because in the fall of 2021, the Centaur performances took place after the Joyce Echaquan events. ” That fear that many Native people have of going to hospitals for health care has always existed, it is part of my reflection on other ways of healing, it reverberates between history and current events, between ailments, diseases and a genocide recognized by the government.”

So the writer, actor and director made some changes to the show, removing one scene, creating another: “Since the NAC had invited me to present the text in both French and English, I integrated the English changes into the French text and included more Anishinaabemowin.” From there, the invitations to perform started pouring in.

For this engaged performer, the performance must remain relevant and current, so there will be more changes for the expected version at Espace Go. The question of language transmission remains central. Since her grandfather was unable to pass on Anishinaabemowin to them, Émilie and her sister Caroline (in charge of the costumes) have to learn it to connect back to the territory: “Having to experience this in my healing process has made the language an important vessel to connect to my Indian territory, to the beaver dream and to my grandmother, who used to come visit me in my dreams.”

THE DOORS OF DREAM

“The dream opens new portals because it often stages senseless situations and I later grasp all the value and deep meaning of these gifts of the invisible,” continues the artist. She has a notebook in which she meticulously notes her oneiric adventures; she likes the irrational poetry that prevails there, the weird connections that one makes, all of which inspire her.

“I had a dream about a giant beaver and in the morning I was very puzzled,” says Monnet. She later learned that giant beavers had existed in prehistoric times and that fossils had been found in the Great Lakes and Northwest Territories. Dreams are truly magical in this sense: ” The fact that I had this dream three times confirmed its importance and that I needed to understand its message; the show was born out of the desire to decipher the beaver’s speech as words of magic guidance”.

In Algonquin languages, there is a verb tense for dreaming that is as important as the present, past and future forms – demonstrating the importance of the dream world among First Nations cultures. Dreaming and waking life are heads and tails of the same coin and the idea to conjugate in dream time appears wonderfully poetic. “Okinum has confirmed the relevance of putting these two narrative timeframes in dialogue.” 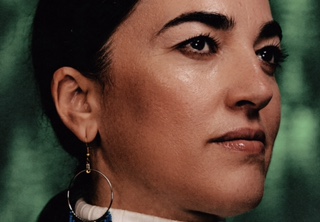 “For me, this performance is a collective experiment, especially since my scenography is circular and we are all within sight of each other”, underlines Émilie Monnet. The artist invites the audience to be part of an event, a cocoon: “With Emma Tibaldo and Sarah Williams, who sign with me the direction, we break the fourth wall so that with the public we are really together and we share a common experience .”

Theater offers a lens on the world that generates discussions, and provides intellectual, spiritual and emotional nourishment. “It’s important to raise awareness about the multiplicity of voices and to the shared common history, like the Indian Act, the residential school system – issues that can’t be ignored.” Because before there can be reconciliation, there must be conciliation.

Okinum is published by Les herbes rouges (2020) and will be published in English this fall. “This text has become a book, it is studied, it no longer belongs to me, I can just represent it with as much sincerity as possible.”