Ms. Kim will become the fourth music director in the history of San Francisco Opera, leading the orchestra, chorus, and music staff, and working with General Director Matthew Shilvock; Managing Director: Artistic Gregory Henkel; and other members of the Company on repertoire and casting. She will be a key member of the creative leadership, helping to shape the artistic direction of the Company’s second century, working closely with the young artist programs, and bringing great opera to Bay Area audiences.

The announcement comes after an inclusive search process led by Mr. Shilvock and Mr. Henkel in which feedback was invited and shared from all parts of the organization.

Effective immediately, Ms. Kim is Music Director Designate, in which role she will participate in the planning of future seasons and in orchestral auditions. She will conduct the Company’s new production of Beethoven’s Fidelio that will be a part of the opening weekend of the 2020–21 season. Complete information about San Francisco Opera’s 2020–21 season will be announced in January.

As Music Director, she will conduct up to four productions in each season of her initial five-year contract, in addition to conducting concerts, working with San Francisco Opera’s resident artist Adler Fellows, and participating in the executive leadership of the organization.

Ms. Kim made her SFO debut conducting Dvořák’s Rusalka in June 2019, and her next SFO conducting appearance is tomorrow—Friday, December 6 at 7:30 p.m.—when she leads the 2019 Adler Fellows in their final concert of the year at the Herbst Theatre.

From my very first moments at San Francisco Opera, I felt this was home. There was an unusual feeling of open collaboration across so many facets of the Company—a real sense of professional alchemy. I’m deeply honored to be joining the San Francisco Opera family and helping to carry this incredible lineage forward.

Eun Sun Kim brings a unique energy to San Francisco Opera. She connects all of us—audiences, artists, technicians, administrators—in the pursuit of one singular artistic journey, bringing thoughtful leadership, deep compassion, and an incredible respect for everyone in the theater. She leads with great vision on the podium but also welcomes each and every person into the creative process, inviting them to do their very best work. The resulting art is spectacular. This community can look forward to a future of extraordinary music-making that connects deeply to the core of what it means to be human. It is a privilege to welcome Eun Sun to be our next music director.

My mother would have been proud to see Eun Sun Kim appointed as San Francisco Opera’s fourth music director. She would have respected Eun Sun’s tremendous artistry and musicianship, and would have been especially thrilled to see a woman ascend to this position for the first time in the Company’s history. Our family looks forward to welcoming Eun Sun into the Bay Area arts community. 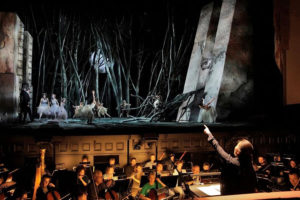 Eun Sun Kim conducting a rehearsal of Rusalka for her SFO debut, June 2019.

Eun Sun Kim brings deep intelligence and profound musicianship to her performances. She has a calm, matter-of-fact way of expressing herself during rehearsals, and never loses her cool or sense of humor. There is a partnership style to her leadership that invites the singers and orchestra to perform at their highest levels with confidence and ease. At the same time, she is in total control of the entirety—of the total pacing of the opera. I am incredibly excited about the future of San Francisco Opera under the musical leadership of Eun Sun Kim.

Members of the AGMA shop are pleased and honored to welcome Eun Sun Kim as the next music director of San Francisco Opera. It is obvious that she is a very skilled conductor with an innate ability to communicate her musical interpretation to the artists on stage. Her conducting is fluid, beautiful to watch and very clear. Her musical ideas are expressed with clarity and remain consistent with the composer’s wishes. We look forward to her tenure as music director and collaborating with her in the service of bringing great opera to San Francisco.

Born in South Korea, 39-year-old Eun Sun Kim conducts frequently at major opera houses across Europe and is increasingly recognized in North America as an insightful interpreter of the operatic and symphonic repertoire. She made her U.S. debut in September 2017, leading a production of La traviata at Houston Grand Opera, and she was subsequently named the company’s first principal guest conductor in 25 years. Last month, she made her Washington National Opera debut conducting The Magic Flute, and upcoming U.S. company debuts include productions at the Metropolitan Opera, Lyric Opera of Chicago, and LA Opera. She returns to Houston Grand Opera in April for a production of Salome. In the concert hall, she has conducted the Cincinnati Symphony, Los Angeles Philharmonic, and Milwaukee Symphony, and future performances include subscription concerts with the New York Philharmonic and Oregon, San Diego, and Seattle symphonies.

Ms. Kim began her career in Europe, where she assisted Jesús López-Cobos at the Teatro Real and Kirill Petrenko at Opéra National de Lyon, before making her own professional debut in 2012 conducting La bohème at Oper Frankfurt. Mr. Petrenko, now Chief Conductor of the Berliner Philharmoniker and General Music Director of the Bayerische Staatsoper, said:

Eun Sun Kim is a colleague who not only exhibits the level of seriousness necessary for a conductor, but also one who has continually developed her talent and abilities through tireless effort and the appropriate self-critical approach to her work. I believe that now is the right moment for her to bring her extensive experience from recent years to a high-level opera house and to have the opportunity to realize her own artistic vision. Likewise, I am convinced that with the appointment of Ms. Kim the San Francisco Opera is getting a remarkable personality as its next music director.

Another important mentor to Ms. Kim was Daniel Barenboim, whom she met while working in Europe early in her career. After hearing Ms. Kim in rehearsals, Mr. Barenboim invited her to make her debut in 2015 at the Staatsoper Berlin, where he is General Music Director. Ms. Kim has since conducted there on many occasions. Upon receiving the news of Ms. Kim’s SFO appointment, Mr. Barenboim said:

While observing the development of Ms. Kim’s international career, I have always found her to be a musician who takes the role of conductor with the utmost seriousness and who holds the responsibilities thereof above all else. Accordingly, she continues to retain her curiosity for music and her desire to improve in all aspects of her career. I was delighted to hear of Ms. Kim’s appointment as the new music director of the San Francisco Opera and wish her and the company all the very best.

Among Ms. Kim’s future European engagements is her debut at the Wiener Staatsoper. She has previously conducted at companies including English National Opera, Opéra de Marseille, Opernhaus Zürich, Royal Danish Opera, Royal Swedish Opera, and Teatro Real. She has been particularly active in Germany, where she maintains a close relationship not only with the Staatsoper Berlin, but also Oper Frankfurt. She has also appeared at the Bayerische Staatsoper, Oper Köln, Semperoper Dresden, and Staatsoper Stuttgart. Her international concert engagements have included performances with Beethoven Orchester Bonn, Calgary Philharmonic, Malmö Symphony, Orchestre de Paris, Symphonieorchester des Bayerischen Rundfunks, and Stuttgarter Philharmoniker, among others.

Ms. Kim studied composition and conducting in her hometown of Seoul, South Korea, before continuing her studies at the Staatliche Hochschule für Musik und Darstellende Kunst Stuttgart (State University of Music and Performing Arts Stuttgart), where she graduated with distinction. Directly after graduation, she was awarded the First Prize in the International Jesús López-Cobos Opera Conducting Competition at the Teatro Real.

Since its founding in 1923, San Francisco Opera has been recognized as one of the world’s leading opera companies. Under the leadership of General Director Matthew Shilvock, the Company’s seventh general director, San Francisco Opera continues to pioneer new approaches to producing large-scale opera in the 21st century and create impactful reciprocal connections with the community.

San Francisco Opera inaugurated its permanent home, the War Memorial Opera House, in 1932 with Puccini’s Tosca starring legendary soprano Claudia Muzio. The Company further established its role as a driving force in the opera world with the creation of the Merola Opera Program and San Francisco Opera Center (which oversees an annual class of resident artists, the Adler Fellows), along with innovative initiatives such as Opera at the Ballpark, a series of live opera simulcasts to the videoboard at the home of the San Francisco Giants, and the annual Opera in the Park concert.

San Francisco Opera has a distinguished history of fostering new operas through commissions, co-commissions, and presenting the world premieres of many contemporary classics, including Jake Heggie’s Dead Man Walking, André Previn’s A Streetcar Named Desire, Bright Sheng’s Dream of the Red Chamber, and John Adams’s Doctor Atomic and Girls of the Golden West. The Company has given the first American performances of many significant repertory works like Poulenc’s Dialogues of the Carmelites, Strauss’s Die Frau ohne Schatten and Messiaen’s Saint François d’Assise.

In 2019, Mr. Shilvock announced the creation of the Department of Diversity, Equity and Community to support the institution’s commitment to education, diversity, equity, and inclusion. Since 1939, the San Francisco Opera Guild continues to live up to its motto—“Giving Voice to Potential”—through its award-winning education programs to more than 64,000 students each year.