New York, NY (May 1, 2022)—After a season-long series of competitions at the district, regional, and national levels, a panel of expert judges named six singers as the winners of the 2022 Metropolitan Opera Eric and Dominique Laffont Competition. Each winner receives a $20,000 cash prize and the prestige and exposure that come with winning the competition that launched the careers of many of opera’s biggest stars. The 2022 winners, the regions they represent in the competition, and their hometowns are: 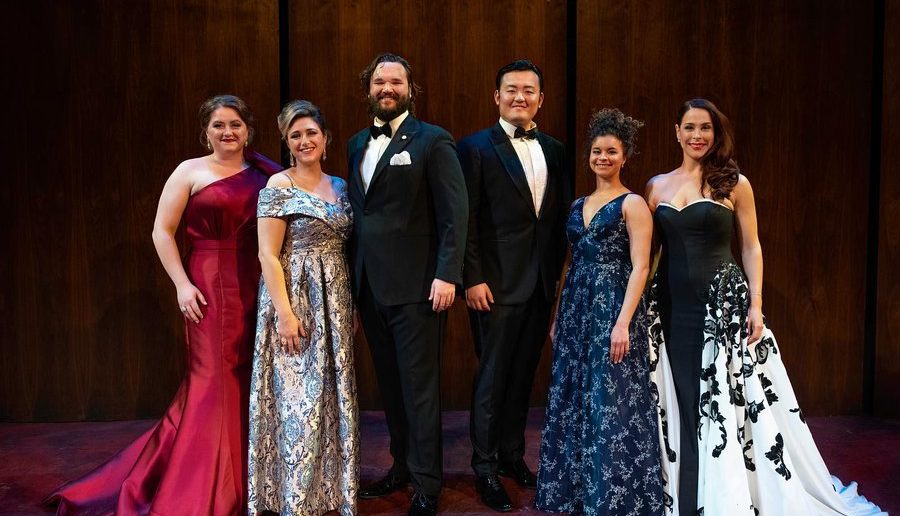 Earlier this afternoon, ten finalists performed in the Laffont Grand Finals Concert, hosted by soprano Nadine Sierra, a Grand Finals winner in 2009. The singers performed two arias on the Met stage accompanied by the Met Orchestra, conducted by Marco Armiliato.

The remaining four finalists, who each receive a $10,000 cash prize, are:

This season, more than 1,100 applicants auditioned for the Metropolitan Opera Eric and Dominique Laffont Competition, with more than 800 singers qualifying for the 39 district auditions, including five in a virtual format and the rest held live. Of the 126 singers in the region rounds, 21 were named semifinalists.

These auditions are sponsored by the Metropolitan Opera Eric and Dominique Laffont Competition, including the Laffont Competition donors and hundreds of volunteers from across the United States, Canada, and Mexico. The National awards in combination with the District and Region prizes amount to nearly a half million dollars.

The Eric and Dominique Laffont Competition, formerly known since its founding in 1954 as the Metropolitan Opera National Council Auditions, is now in its 68th season. The Met’s nationwide vocal competition is a potentially career-making opportunity for aspiring opera singers, given the reach of the auditions, the number of applicants, and the program’s long tradition.  The Auditions have been crucial in introducing many of today’s best-known stars, including Renée Fleming, Susan Graham, Eric Owens, Stephanie Blythe, Hei-Kyung Hong, Sondra Radvanovsky, Lawrence Brownlee, Michael Fabiano, Latonia Moore, Lisette Oropesa, Jamie Barton, Anthony Roth Costanzo, Ryan Speedo Green, and Nadine Sierra.

The competition gained international acclaim with the release of the 2008 feature-length documentary The Audition, directed by award-winning filmmaker Susan Froemke, which chronicled the 2007 National Council Auditions season and Grand Finals Concert.

Le Bu is currently pursuing his undergraduate degree at Manhattan School of Music, under the instruction of legendary bass-baritone James Morris. He began his vocal training at Shanghai Conservatory of Music before transferring to Wichita State University, where he studied with tenor Michael Sylvester. This year, he joined San Francisco Opera’s Merola Opera Program and has also participated in the Aspen Music Festival and School and iSING! International Young Artist Festival. His operatic roles in Figaro and Dr. Bartolo in Le Nozze di Figaro and Simone in Gianni Schicchi. In 2018, he was a winner of the Barbara Rondelli Kansas Statewide Classical Voice Competition. Midwest Region.

A current member of the Canadian Opera Company Ensemble Studio, Matthew Cairns recently sang the Prince of Persia in Turandot, the Witch in Hänsel und Gretel, and the Gamekeeper in Rusalka, and covers Alfredo in La Traviata. He has also appeared as Don Ottavio in Don Giovanni and Gherardo in Gianni Schicchi with the Centre for Opera Studies in Italy, Liberto in Monteverdi’s L’Incoronazione di Poppea at Opera Theatre of St. Louis, and Detlef in Romberg’s The Student Prince at Chautauqua Institution, where he placed first in its Sigma Alpha Iota Competition. Other roles include Count Belfiore in Mozart’s La Finta Giardiniera, Sam Kaplan in Weill’s Street Scene, and Sam Sharkey / a Lumberjack in Britten’s Paul Bunyan. He was a finalist in the 2022 Neue Stimmen Competition, first-prize winner of the 2018 Canadian Opera Company Ensemble Studio Competition, and winner of the CBC Music Young Artist Development Prize.

This year, Alexandra Razskazoff will make her international debut as Mimì in La Bohème at Chile’s Teatro Municipal de Santiago and reprise her portrayals of Violetta in La Traviata at Opera Columbus and Donna Elvira in Don Giovanni with Teatro Grattacielo at the Phoenicia International Festival of the Voice. Also during the 2021–22 season, she sang Suzel in Mascagni’s L’Amico Fritz with Teatro Grattacielo and Giannetta in L’Elisir d’Amore at Palm Beach Opera, where she also covered Micaëla in Carmen and Hanna Glawari in The Merry Widow. She was a young artist in San Francisco Opera’s Merola Opera Program and an apprentice artist at the Santa Fe Opera, and while a member of these prestigious programs, she prepared roles including Violetta, the Countess in Le Nozze di Figaro, Musetta in La Bohème, Wellgunde in Das Rheingold, and Blanche de la Force in Dialogues des Carmélites.

Julie Roset has sung Papagena in Die Zauberflöte at Opéra de Toulon, Aurora and Giunone in Sacrati’s La Finta Pazza at Opéra de Dijon and Opéra Royal de Versailles, Amour in Rameau’s Les Indes Galantes at Opéra Royal de Versailles and the Beaune Festival, Amour in Mondonville’s Titon et l’Aurore with Les Arts Florissants at Paris’s Opéra Comique, and Galatea in Handel’s Acis and Galatea at the Juilliard School, and appeared in Il Combattimento, la Théorie du Cygne Noir, a musical journey through the Italian Baroque, at the Festival d’Aix-en-Provence. As a concert performer, she has appeared with Cappella Mediterranea, Ensemble Pygmalion, and Le Centre d’Art Vocal et de Musique Ancienne’s Millennium Orchestra Ensemble Correspondences, among others. This season, she sings Galatea with the Orchestre Philharmonique de Radio France, Euridice in Rossi’s Orfeo with Julliard415, and Amore and Valetto in Monteverdi’s L’Incoronazione di Poppea at the Festival d’Aix-en-Provence.

Anne Marie Stanley is a third-year resident artist at Philadelphia’s Academy of Vocal Arts (AVA) in Philadelphia, where she recently appeared as Olga in Eugene Onegin. In her first year at AVA, she sang Léonor de Guzman in Donizetti’s La Favorite, as well as works by Korngold, Massenet, and Bernstein. Elsewhere, she has performed Mozart’s Mass in C major with the New England Symphonic Ensemble at Carnegie Hall and Dinah in Bernstein’s Trouble in Tahiti and Marcellina in Le Nozze di Figaro with Music Academy of the West. In 2015 and 2017, she was an apprentice artist at the Santa Fe Opera, where she sang Giovanna in Rigoletto and covered Olivia in the world premiere of Jennifer Higdon’s Cold Mountain. She recently won first prize in the 2021 AVA Giulio Giargiari Bel Canto Vocal Competition and was selected as a grand finalist in the 2021 Vincerò World Singing Competition.

Romanian-American soprano Esther Tonea has appeared in concert and recital across North America and Europe. In 2021, she performed in The Adler Fellows in Concert with the San Francisco Opera Orchestra, singing the mad scene from Bellini’s Il Pirata, and in The Adlers: Live at the Drive-In, where she sang music from Valurile Dunării. She has also appeared as a soloist in Haydn’s Missa in Angustiis and The Creation, Mahler’s Symphonies No. 4 and 2, and Mozart’s Exsultate, Jubilate and Requiem, and in 2019, she sang Diana in the world premiere of Jake Heggie’s If I Were You. She is a Richard F. Gold Career Grant recipient and an Adler Fellow at San Francisco Opera. She holds a master’s degree from the San Francisco Conservatory of Music and bachelor’s degrees from the University of Georgia.