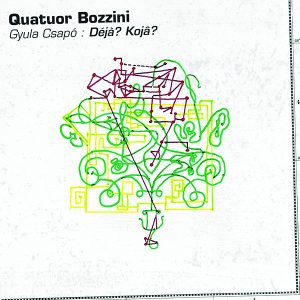 In recent years the Bozzini Quartet has added to its discography recordings dedicated to a single composer, sometimes even devoted to a single work. That is also the case with their most recent album, Déjà ? Kojâ ?, which is a mix of French and Persian languages meaning “Already? to where?” The title of the same name for string quartet is by Gyula Csapo, composer of Hungarian descent.

Commissioned by the Bozzini Quartet, the work underwent various transformations before its completion in 2016. It is structured in three parts of more than 20 minutes each, making it an imposing work. It contains elementary musical materials which, according to the will of Csapó, are never fulfilled as real constituted objects. The quartet is, to quote the composer, “the epic testament of a child who, pulling its toy along, regardless of the terrain, is the first witness of the indelible markings that result in being formed – the markings of travel.” It is indeed a whole musical journey, one where diverse sound textures co-exist and collide, sometimes thin, sometimes thick.. A journey which, between quiet moments and turbulent ones, will definitely put the listener in a state of constant movement. JB 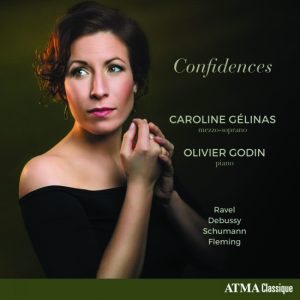 Radio-Canada revelation of the year in the classical category and the holder of grants from the Jacqueline Desmarais Foundation, Hnatyshyn Foundation, Stingray Rising Star, Jeunesses musicales du Canada and the Art Song Foundation of Canada, the young mezzo-soprano Caroline Gélinas has made her first album, accompanied by pianist Olivier Godin, under the Atma Classique music label.

Ravel’s Shéhérazade, comprising three songs, is the opening piece. We discover a singer whose tone is velvety and languid, perfect for interpreting this exotic cycle by a French composer. Her diction is clear and there is real determination to tell a story. The pianist’s subtle efforts carry us with a certain nonchalance into this universe. Debussy’s Trois chansons de Bilitis come next. The listener finds here much sensuality, particularly in “La Chevelure.” Godin’s subtle and refined playing marvellously sustains a text that evokes mythical creatures.

In Schumann’s Gedichte der Königin Maria Stuart (Poems by Queen Mary Stuart) the mezzo-soprano shows us the vulnerability and sensibility of the fallen queen. This cycle is Schumann’s last. Its themes, all in minor mode, shine a light on how the composer felt towards the end of his life. The melodies evoke a great heaviness of spirit.

The Confession Stone cycle by Canadian composer Robert Fleming, originally composed for contralto Maureen Forrester, completes the album. The religious poems written by Owen Dobson are inspired by spirituals; the melodies reflect this sonority. Gélinas’ and Godin’s interpretations are very tender and lead us to discover the full scale of the young mezzo-soprano’s voice. MF

A symphonic cycle from most composers marks a stately progress from imitative beginnings to a predictive summit. Think Brahms with all that Beethoven clutter in the first symphony and those weighty Mahler anticipations in the fourth. Well, Arvo Pärt is not quite like that.

His first two symphonies, written in the mid-1960s, are set in Schoenbergian twelve-tone with a polyphonic overlay, an intentional affront to Soviet rule in Estonia. The third, dated 1971, marks his conversion to Russian Orthodoxy with voices from heaven, Bach chorales and other spiritualities. The fourth, dated 2008 and titled ‘Los Angeles’, is inscribed to Mikhail Khodorkovsky, the Russian business leader imprisoned by the Putin kleptocracy. It’s more of a mojita made with organic cranberries (yes, I know, no crannies in a mojita).

It goes without saying that the brave early symphonies are by far the more impressive. Pärt’s self-taught modernism allows him to keep a more open mind than western serialists. In the second symphony he toys with improvisation. He is a rebel, ready to embrace any cause so long as it is not totalitarian.

The third symphony is easy listening. The fourth is closer to mush. The performances by NFM Wroclaw Philharmonic and Tonu Kaljuste are plainly labours of love and ECM’s recording is immaculate.

Best of all, ECM have the last of the great booklet writers in Wolfgang Sandner. His notes are a model of useful information and analysis, avoiding the greasy sycophancy that soaks through most glossy booklets these days. I learned a lot, which I rarely do from new releases. Worth buying for the booklet alone. NL