La Chapelle de Québec isn’t performing its first Messiah by Handel – far from it. On this side of the Atlantic, tradition has it that this oratorio is sung during the Christmas season. Each performance seems to bring its share of new experiences. This year, the ensemble will be joined on stage by soloists of international renown, including British countertenor Tim Mead. “Collaborating with such talented artists opens up new interpretive possibilities, such as the choice of arias I can do,” said Bernard Labadie. 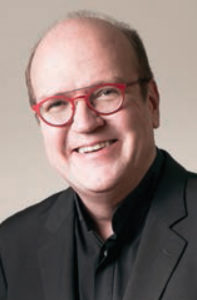 For the founder and music director of La Chapelle de Québec, it’s essential to keep the pleasure of conducting such a seminal work intact. “In my career, I’ve conducted the Messiah hundreds of times. From now on, I’ll dive back into it once every four years or so. I’m not tiring of it. I rediscover the exceptional quality of the musical narration and the admirable way Handel constructed this work, which at moments resembles a choral opera.”

Composed exclusively, today, of professsionals of the same calibre as Les Violons du Roy, la Chapelle de Québec was officially founded in 1985. Actually, it emerged from a choir that had already existed for several years. It originated from what was then Université Laval’s École de musique, according to Labadie. It was also during this period that the young conducting student gave his first concert with choir and orchestra. “I was 19 years old at the time. This project symbolized everything I wanted to do later on: a Purcell opera, Dido and Aeneas, with a small string orchestra and a choir. The repertoire for choir and orchestra is in fact the origin of my vocation. It was what I had to do – what I wanted to do with my life.”

Along with Les Violons du Roy and La Chapelle de Québec, Bernard Labadie is also the founder of the Le Chemin de Noël festival, which is already in its fourth edition. This festival was designed as a Quebec adaptation of the Festival of Nine Lessons and Carols of Cambridge (U.K.), an annual event that has helped propagate English-language Christmas songs for over 100 years.

“I had the chance to attend it, and the idea took shape in my mind when I returned from this visit,” Labadie says. “I wanted to create a blend of texts and choral music associated with the holiday season that was ‘poetic-musical.’” With Le Chemin de Noël, La Chapelle de Québec and I wanted to give back to Quebec City, which actively supports us. Today, we can count on exceptional cultural venues such as Palais Montcalm, la Maison de la littérature, and even the Diamant, which has just opened its doors.”

La Chapelle de Québec will present Handel’s Messiah on Dec. 11 and 12 at Quebec City’s Palais Montcalm and on Dec. 13 at the Maison symphonique in Montreal. www.violonsduroy.com