You are at:Home»La Scena Online»Elora Festival – A wide array, with the Elora Singers at its heart

This year marks the 40th anniversary of the Elora Festival. Recognized as “North America’s signature music festival for vocal/choral and chamber music performed by Canadian and international artists,” it unfolds every summer in the picturesque town of Elora, Ontario.

This year, the festival boasts an impressive lineup of 35 concerts and events from July 12 to July 28. At the core of the festival are the world-renowned Elora Festival Singers. This JUNO Award-nominated ensemble will perform in many concerts, including the opening gala featuring the renowned State Choir Latvija, soprano Jane Archibald, Piano Six, TorQ Percussion Quartet, composer Barbara Croall and many other special guests.

At the helm of the Festival and the Singers is Mark Vuorinen. Named artistic director of the Elora Festival and Singers in 2018, Vuroinen is just finishing the first year of his tenure in the position.

“I stepped in last year and executed a plan that was already in place,” Vuorinen says. “I had conducted a performance in the winter, and we had a great first impression, both myself and the choristers.” After a string of successful engagements with the Elora Singers, his appointment to the role “grew naturally.”

After completing master’s studies at Yale, Mark then “came home” to pursue doctoral studies at the University of Toronto. While completing his studies, the Kitchener-Waterloo native started conducting the Toronto Chamber Choir and shortly thereafter was appointed artistic director of the Grand Philharmonic Choir in Kitchener-Waterloo, where he will mark his 10th season starting in the fall.

“It’s an exciting juncture to be taking over leadership at the Elora Festival,” says Vuorinen of the 40th anniversary season. “The festival has a wonderful artistic past to build on, in such a unique location, bringing in artists from across Canada and around the world.”

One highlight of the opening gala is a commissioned work by First Nation composer Barbara Croall. “The piece is composed using indigenous languages and she will accompany us on indigenous flutes,” says. The evening’s program, like the entire season, puts the Elora Singers at the centre of it all.

“It’s a unique situation [in Canada]to have a professional choir that is the backbone of a music festival. I wanted the program to reflect that and how wonderful our Singers are, not only as a choir but as soloists as well.”

They will be joining forces with Richard Ouzounian and Thom Allison for a Nat King Cole retrospective. They will also be featured alongside Cape Breton fiddling sensation Natalie MacMaster. A number concerts will feature the Singers performing everything from jazz and opera to pop and folk music.

A second premiere is slated for the closing event. This Love Between Us, by American-South Indian composer Reena Esmail, is a companion piece to Bach’s Magnificat, using the original instrumentation and adding sitar and tabla. The piece expresses through five different religious traditions the belief that “the things that bring us together are stronger than those that drive us apart,” Vuorinen explains. Both the Esmail and Croall pieces will be recorded for release after the festival.

During the festival the Singers spend pretty much every day together making music. Vuroinen is using this to plan for the future in other ways as well. Expanding on his “immersive” approach, he intends to “workshop pieces that we would then be able to package and take to other places, be it across Canada or even further.” 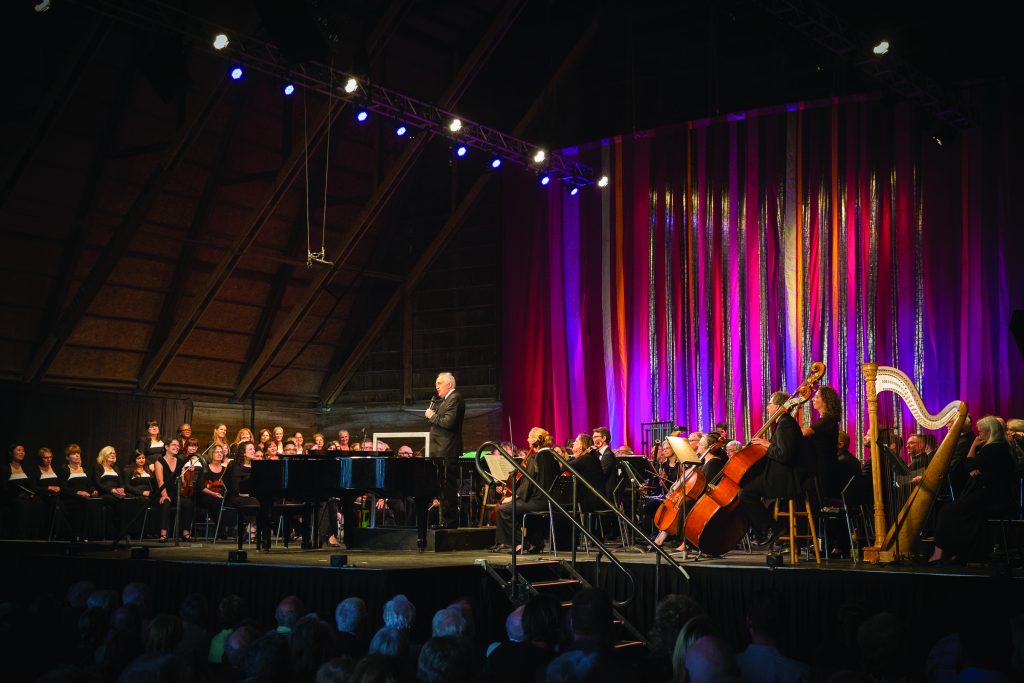 Inspired by a performance of Brahms’s Requiem in Berlin recently in which singers were mixed among the audience in a venue with no stage, Vuorinen wants to focus on innovative and immersive experiences. He is convinced that “this is the way to move forward.”

Obviously not every piece can be presented this way. “Of course we will still do traditional programming and performances,” he says. “We’ve built a long tradition of excellence. But we need to find new and innovative ways to experience the major classics of the repertoire.”

One of the pieces that “call out” for a more immersive experience is Joby Talbot’s Path of Miracles, which is about the Camino de Santiago pilgrimage through Spain, France and Portugal. The plan for this more immersive performance is to “transform the barn, which is a standard shoebox theatre, into a theatre in the round with the Elora Singers in the centre of the room.”

The wide variety of offerings include English and French choral evenings, the Voices of Light (featuring a composition to accompany the silent film The Passion of Joan of Arc), Bach’s Magnificat and Orff’s Carmina Burana. With guests like LATVIJA, Archibald, Measha Bruggergosman and Thom Allison, to name a few, there is sure to be something for every kind of music lover.