After a long, pandemic-induced delay, the Bayreuther Festspiele finally premiered its new production of Wagner’s Ring Cycle on July 31, but not before a myriad of changes.

Back in the before-times, the Cycle was to have been staged by German director Tatjana Gürbaca, who mounted an exciting Ring deconstruction that I saw at the Theater an der Wien in 2017. Its first installment entitled Hagen – a mashup of Rheingold and Gӧtterdämmerung – followed the titular character’s development from a traumatized youth to the brutal villain we love to hate in the final installment in Wagner’s tetralogy (put a pin in that concept, as it comes back at Bayreuth in 2022).

However, it was not possible to agree on adequate rehearsal times for Gürbaca, and so, Festival Director Katharina Wagner, handed over one of the most heavily-scrutinized jobs in all of opera to Austrian director Valentin Schwarz, only 29 years old when the project was supposed to premiere in 2020. The Cycle has since suffered a pandemic delay, multiple cast changes, and most critically, a last minute switch during the final music rehearsals when the original conductor, the Finn Pietari Inkinen, was taken ill with Covid and replaced by German maestro Cornelius Meister.

The results, both dramatic and musical, are decidedly mixed. It isn’t an exaggeration to say I have never before heard the degree of disturbing, vociferous booing that greeted Schwarz and his production team when they appeared alongside the singers, conductor and orchestra at the end of the cycle. There was also a contingent of competing ‘bravos’ that increasingly got drowned out by the ‘boos’. Security was finally called in to clear the hall.

Some critics have remarked that the dissent was sparked by ultra-traditionalists who cannot abide any tinkering with the Bayreuth master’s ‘original’ staging prescriptions, but I would beg to differ. Schwarz’s concept included its share of intriguing ideas and visuals, but many were carelessly tossed out with little thought or development  as the Cycle unfurled. The audience’s anger was palpable, and frankly, I was astonished that none of it erupted mid-performance. Ultimately, the audience was fed a concept that lacked nuance and avoided any of the more universal, philosophical, humanistic aspects contained within Wagner’s dense text and score.

From early on in its gestation, Schwarz’s production had been dubbed the ‘Netflix Ring’ – each opera in the cycle is effectively treated like an episode of a streamable TV series. More recently, the director seemed to backtrack from this cliched tagline, but in the end it more or less sums up the concept. Wotan and his family are horrible, entitled nouveau riche who sport lots of bling and take obnoxious selfies.

The Ride of the Valkyries scene is a case in point: the warrior sisters are seen in various stages of facial bandaging and breast enhancement in the waiting room of a posh plastic surgeon’s office. It’s amusing, and probably one of Schwarz’s more successful ideas given how perfectly it encapsulates the family’s superficiality and socioeconomic standing. Much more dispiriting was the final act of Gӧtterdämmerung, set in the bottom of an almost-emptied swimming pool where Brünnhilde simply lays down beside the dead Siegfried as the world ends with no visual fanfare to match that found in the score.

It would be impossible to list all of Schwarz’s directorial tweaks, whether clarifying or obfuscating. It was clear from the get-go in Das Rheingold that the titular gold – the precious object all the key players need to cement their power – was represented here by children, often roughly treated as little more than chattel. When we enter Niebelheim, the realm of the dwarves, we are confronted by a disturbing scene of school children busily working at their tables under the creepy, watchful eye of Mime. One boy dressed in a gold t-shirt is clearly out-of-control, throwing food at the glass walls of the classroom. As Schwarz’s cycle unfolds, we learn that he is the future Hagen, the cycle’s uber villain from Gӧtterdämmerung. In Siegfried, he shows up again as a socially maladjusted 30-something and then finally, when the ‘real’ Hagen appears, it’s as a much older man sung by bass-baritone Albert Dohmen.

Elsewhere throughout the cycle, Schwarz obsessively ages his characters (for example, the youthful Rheinmaidens of Rheingold end up as creaky old women by Gӧtterdämmerung), but like so many of the director’s inventions, the Hagen/child/gold concept isn’t thought through. Dohmen’s demeanor is just too aged and unthreatening in voice and manner to have credibly originated in Rheingold’s young future-serial-killer. This seemingly careless approach to detailed character development, or Personenregie to use the apt German term for a director’s role in coaxing believable performances from his artists, results in too many generalized, cliched portrayals. For all its vaunted Netflixability, neither compelling interactions nor purposefully-communicated soliloquies are much in evidence, leaving the audience with little to hold onto besides a dull family saga, better told in the land of binge streaming.

Visually, things were also mixed. Wotan’s realm as designed by Andrea Cozzi was successful in conveying the family’s status: a luxe, polished blonde wood 1930s/50s German modernist villa. This setting was ingeniously repurposed from different angles throughout the cycle, always recognizable but inventively re-jigged. One of its more intriguing permutations is into a large, double children’s bedroom seen for the first time in Die Walküre. There, we’re led to believe the young Siegmund and Sieglinde grew up…under Papa Wotan’s possibly paedophilic eye (again, there are just too many Schwarzisms to list, but I’ll throw that one out there for discussion).

The double bedroom comes back in Act 1 of Siegfried as Brünnhilde and Siegfried’s abode where they’re raising their child (another invented character who remains distractingly present throughout the rest of the cycle). But many scenic elements look cheap, and it’s difficult to know whether this is purposeful or not. Gӧtterdämmerung’s fetid, emptied out swimming pool long outstays its welcome, offering little to visually balance the apocalyptic heft contained within the aural conflagration that concludes Wagner’s massive work.

Given the nigh-impossible task of trying to recount and assess all the eccentricities of this show, its musical aspects are relatively straightforward to judge. This is one of those Rings where most of the recurring lead characters are cast with different singers in each of the cycle’s segments. Added to that are the current depressing Covid realities of last-minute substitutions, and one rather unfortunate stage accident.

As Wotan, Polish bass-baritone Tomasz Konieczny crashed to the ground when his stylish Eames armchair fell apart in Act 2 of Die Walküre. He finished the act, but was replaced in the third by baritone Michael Kupfer-Radecky, already slated to sing Gunther in Gӧtterdämmerung. Konieczny rallied for his Wanderer in Siegfried, his tone suitably magisterial, but words mostly unintelligible. In this regard, his replacement was exemplary, and it must be said, outshone Konieczny with highly nuanced text delivery and characterization. 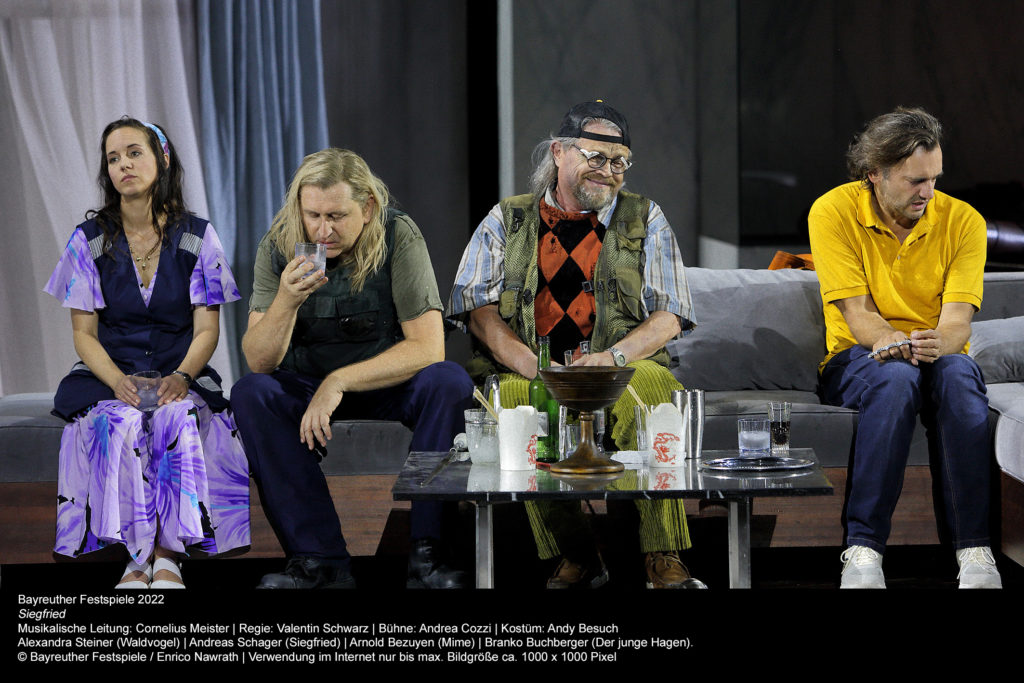 Brünnhilde is sung by two very different types of singers. Swedish soprano and seasoned Wagnerian Iréne Theorin is the Walküre and Gӧtterdämmerung Valkyrie. In its current state however, her tone is fluttery, especially at lower volume in her mid and lower registers. Higher up, she delivers a powerful, silvery sound but the potential to connect with the audience is hindered by incomprehensibility, as with Konieczny. For Siegfried’s final act, Daniela Köhler offers a cleaner sound, but lacks perhaps the extra ounce of ‘juice’ needed to dominate this admittedly treacherous patch of the score.

Tenor Andreas Schager is another known quantity on the international Wagner circuit, and his titular Siegfried showed why. His technique is a marvel, and perhaps one could only ask for a little more nuance in delivery, which tends to be loud…and louder. Another casualty was tenor Stephen Gould, who bowed out at the last moment as Siegfried in Gӧtterdämmerung. His cover, Clay Hilley, was flown in from his Italian vacation and, vocally, did the job well enough, though he offered very little in the way of physical engagement with the concept or character, perhaps due to lack of stage rehearsal.

Soprano Lise Davidsen as Sieglinde was the vocal star of the entire project, taming her massive tone as the text demanded, delivering musical thrills so dearly missing elsewhere. Another of Schwarz’s bizarre ideas is to present her visibly pregnant from the get-go, meaning the child Siegfried is not the product of an incestuous relationship with her brother, Siegmund. It’s not that this couldn’t be an ‘interesting’ take…but like most of the director’s monumental tinkering with the original story, it’s never integrated into the overall concept, is left unexplained, and offers little-to-no payoff.

Tenor Klaus Florian Vogt has always been controversial as a Wagnerian, but his idiosyncratic, almost straight-tone vocal emission seems to work for him. His Siegmund, along with Davidsen and the incredible bass Georg Zeppenfeld as Hunding, turned Walküre Act 1 into the musical highlight of the cycle, and one of the few acts that didn’t get booed.

Conductor Cornelius Meister was unfortunately not so lucky in that regard, receiving a mixed reception at the cycle’s end. In general, there was a certain homogeneity to the dynamic levels he coaxed from the orchestra. Big moments like the climaxes of “Siegfried’s Journey” just didn’t have the impact they normally do given the overall lack of contrast. But there can be no doubt that having so little rehearsal time with the orchestra must have affected Meister’s ability to work on the finer interpretive details.

When one considers the resources that go into creating a new production of the Ring – and that despite pandemic trials, this one had been cooking for a few years – it’s difficult to fathom the incoherent concept that premiered on July 31. This is not a ‘conservative’ reaction, but rather a lament that one of the most profound, elusive works in the history of musical theatre was offered up with a two-finger salute to the audience. It’s the Festival’s practice to revive productions over consecutive seasons, so I hope that Schwarz will use that opportunity to take what are in many cases intriguing interventions and turn them into something more cohesive and genuinely thought-provoking.