On the third night of the 2018 Suoni per il popolo festival, guitar fans were in for a treat, i.e. guitar with a decidedly avant-garde twist. No polished standards or shiny virtuosity for its own sake this night, but provocative deconstructions of idiomatic music, with sound artists Wendy Eisenberg, Jason Kahn and Eugene Chadbourne in three solo sets.

Thanking the audience for its attentiveness and announcing she would be playing improvised music, Wendy Eisenberg launched into minimalist deconstruction in the first piece, using her archtop guitar’s sonic palette in ways reminiscent of Derek Baily. Rhythmic ostinatos, discontinuous melodic and harmonic cells, contrapuntal lines run in a mesmerizing manner, all converged as Eisenberg’s muse pushed the envelope of conventional tuning and compositional thinking.

In the second piece the charismatic guitarist sang along to her improvised harmonies in a folksy fashion, with a sweet and tuneful voice. The harmonies stretched and morphed in fascinating, disarmingly unpredictable twists and turns, the music going into bizarre harmonic territory that surprised the ear at every turn. Lest we not forget the timbral exploring via articulations either in right hand arpeggios or left hand dampings , pull offs, hammer ons, and blazing-speed lyrical runs.

The third and final piece was an off-the-wall take on the Broadway tune “On the street where you live,” or it sure sounded like it. The deconstruction took the tune into new territories and swept the audience along. Her sound, in this piece and all along, was barely amplified, but always with a rich acoustic sonority.

Jason Kahn’s set was a study in theatrical musical gesture, if one can use such a term. With a National-steel-like resonator guitar in tow and a vocal style that could be described as a hybrid between melismatic fado and asthmatic seizure sounds, Kahn brought both gravitas and humour to the stage. The stripped-down guitar style recalled the Delta Blues, via the bottleneck, and moans and groans underscored the effect. Rhythm was paramount, which is of no surprise from this musician who began as a drummer in Los Angeles-based alternative rock and avant-rock bands in the mid-’80s.

Again, a deconstructive approach reigned, as Kahn emoted and propelled the music forward viscerally, recalling the feel and timbre of blues, but without any of the habitual reductive and imitative mannerisms. Here the howling was real and at the same time, comically self-referential. Yet, such large howling gestures were contained and understated, leading the listener to lean in and get involved. 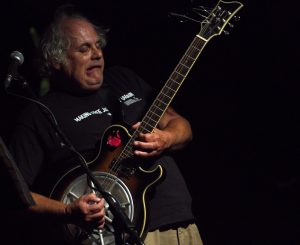 By contrast, the closing set by headliner Eugene Chadbourne was AC/CD aggressive, with an overdrive in both volume and in rhythmic intensity, especially as he whirred the crazy lines and patterns and shredded with adolescent fury.

Chadbourne’s shift at the banjo brought some relief in volume, but the rhythmic drive and lyrical ideas just kept flowing, cascading, gushing. Punctuated by absurdist lyrics like “The black paper between the mirror breaks my heart” or euphonious lines of verse that silkily sailed through the air, the insurgent guitarist kept relentlessly cranking out what could be described as urban mountain music on acid. When the set ended, it felt more like two hours than just under an hour, given the extreme ride we were put through where the loud solipsistic basement wanking/shredding was raised to aesthetic heights and the memory of the intimacy of the previous two performers was flooded by Chadbourne’s high-octane metal guitar runs. Another distinct element of the music was how the guitarist maintained a low vocal hum while playing his incoherent lines, which gave the music a profound coherence.

What I was led to conclude at the end of the evening was that Chadbourne’s pioneering work has created a space for the non-normative, idiomatically liberated sound artists working with guitar and that is a grand thing, indeed.