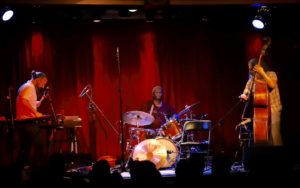 At 19 days, Montreal’s Suoni per il Popolo festival certainly has few rivals, if any, in terms of duration, and artistic scope. Since its inception in 2001, it has dedicated itself to all forms of non-traditional musics, variously labeled as “creative”, “experimental”, “free form”, or whatever one cares to call these, if need be. Jazz, for its part, has always had a place in its program, more specifically from this music’s avant-garde (from Free Jazz to all non-idiomatic practices of improvisation). Yet, its presence has varied from one edition to the next, some years better or more exciting than others, which is to be excepted from an event that has never billed itself as a ’jazz festival’ in the first place.

Festival habitués agreed that this year’s run, its 19th, was a bit wanting in jazz. With the exceptions of, David Murray and Hamid Drake and, arguably, Dave Burrell, headliners were spotty, unlike the last couple of editions when heavy hitters like Braxton, Mitchell (Roscoe, that is), Brötzmann, Leo Smith and Vandermark were sure drawing cards.

While the pickings may well have been slimmer, there were still things to check out, some of it unknown to this writer, and an incentive to to check things out. The first opportunity (Mon. 10) was a double bill (almost a set rule in the festival’s programming) that opened with cellist Tomeka Reid playing off Mother Moor (a,k.a. Camae Ayewa), an electronics player who turned knobs of what seemed like a beat box. Sounds there were, but, sorry to say, these ears did not perceive anything of consequence. The main act, Irreversible Entanglements, should have replaced its qualifier by the word “overwhelming”, as in a drummer who spent most of the set drowning out everybody, the trumpeter reduced to making short blasts at the top of his lungs to be heard, the saxophonist laying his horn aside for a long stretch to noodle on a keyboard, not to forget the bassist whose amp repeatedly produced feedback, some apparently of his own volition. Had they decided to cover a tune, maybe How Insensitivewould have been appropriate.

Two nights later (Wed. 12), the Montreal collective SuperMusique joined forces with a French contemporary music ensemble (OMEDOC) and three musicians from Finland for what was surely the biggest deployment of musicians, 27 if my count was right. Held in a nearby church, this event made use of the large space and resonant acoustics, where instruments and voices were at first spatialized, only to gradually come together in front of the alter. The music stemmed from the Montrealers and their guests, some scores seemingly graphic, others with clearly notated parts. While such presentations are not without appeal in a live setting, they are best heard that way than, say, a recording.

From the numerous to the very few, the third show (Thur. 13) offered a trio and a duo in the pocket-size music room of the Casa del Popolo. On the surface of it, the cello served as common denominator of the evening, but no two acts could have been more unmatched than these. In what seemed like an unending set, cellist Justin Wright offered an utterly egregious take of classicism that would made Arvo Pärt sound radically avant-garde. With a limp violinist to his left and a keyboard/sampler player to his right, this musical pap was clearly the wrong music at the wrong festival, or any festival for that matter. By set’s end, a musician next to me quipped were he not put on the guest list (by the second group), he would have asked for his money back. Ditto here. The evening, however, was not completely wasted as the duo of Korean-American cellist Okkyung Lee and Danish saxophonist Lotte Anker crossed swords, or axes if you will. Their all improv set produced some energetic exchanges, each player shadowing the other’s every move. Sadly, they stopped before the 45-minute mark, the cellist showing what might have been a finger blister to her stage partner. Somewhat disquieting though was Lee’s long hard stare she threw into the room before starting, as if wanting to land into the audience, but those in the know are aware of her general attitude. 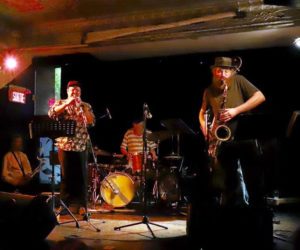 Next up (Wed. 19) was a tribute to the first free jazz matadors of our city, the legendary Quatuor du jazz libre du Québec. This show came about in the wake of a recently published book on this group, whose eight year run ended ages ago, in 1975. First off was the showing of a documentary shot during that era (1973), a grainy period-piece B&W video that featured the QJLQ in its short-lived Old Montreal haunt (L’amorce), and segments with other rebellious free improvisers, the most notable being Tristan Honsinger in his pre-European days. Unlike other places, that budding Quebec improv scene failed to document its activities on record, save for one LP by the QJLQ in 1969. The performance part that ensued was divided in two sets, both featuring the last surviving member of the original quartet, drummer Guy Thouin. With three younger charges (Félix-Antoine Hamel, tenor, Craig Petersen, trpt. and Nic Caloia, b., the band proceeded to “recreate” the group’s album, one that was not totally free but had some composed heads. After a short break, the drummer first sparred with the tenorman, now on soprano and dofting his cap to Evan Parker (minus the circular breathing and dizzying virtuosity), then a couple of fellow travellers of earlier times, Raymon Torchinsky (on the rare mezzo alto sax), Brian Highbloom and Claude Maheu, each on thenor, the latter adding bass clarinet during a final collective blow out. By and large, it had all the ear-markings of a reunion of the old stove league of free jazz, nostalgic for sure, but still enjoyable, even enhanced by some gritty playing, the trumpeter’s searing solos reminiscent of the late Raphe Malik. But in a night dedicated to “classic” free jazz, it was curious to have the quartet reading off the tunes decked out on music stands, especially given their simplicity.

In keeping with festival policy, another double bill was on tap the following evening, and a most dissimilar pairing it was. Vancouver’s Gordon Grdina (surely Canada’s champion touring musician – he had come through town six weeks earlier with another lineup) lead a quartet of notable Americans, Russ Loessing (on electric keyboard rather than his customary acoustic one), Oscar Noriega (alto sax, bass clarinet) and Sato Takeishi on drums. If the first concert in this review was marred by an obstreporous drummer, so was the case here. Indeed, the incessant pummelling of the tubman was on the level of a punk or metal band (which apparently he has been gigging with of late), the resulting din compounded by the fuzzy keyboard effects. Only a balladic piece towards the end provided some relief, though it was too little, too late. Based on precedent, as in another Grdina show two years ago, the plectrist seems to have a problem with drummers. How ’bout a drummerless band for a change, Gord? 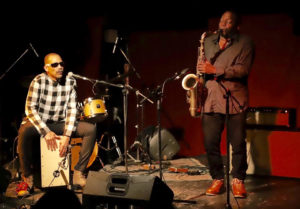 This quartet made room for superstar David Murray and percussionist/drummer Kahil El’ Zabar. As much as Murray is the world heavyweight champion of saxophone bravado, Zabar’s input is minimalist to the point of simplisti. Cases in point were his static grooves on kalimba (when not on drums), or gentry beating his cajon, and grunting through it all. A fellow attendee noted that the duo played exactly the same repertoire that night as their previous appearance in town a year and a half earlier – and hearing them play Summertime in an event like this was about as retro you could get, the QJLQ show notwithstanding. But in all fairness for the organizers, this duo was called in to replace a late cancelling from Charles Gayle. Yet, to have this show booked for the minuscule 40-seat Casa music room was most unbecoming of a musician of Murray’s stature (maybe even Gayle’s), yet a move to its roomier la Vitrola venue down the street was a gamesaver, for musicians and audience alike. 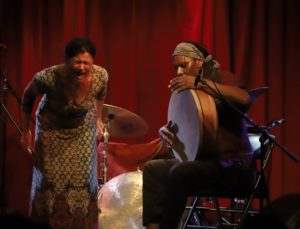 For any festival, a closing show has to be an attention getter, one with drawing power. The return of drummer extraordinaire Hamid Drake on Sun. 23 saw a festival favourite back in town after three years. He was front and center in both acts that evening, the first with vocalist/violinist Iva Bittová then with familiar associates of his, Jason Adasiewicz (vibes and an African variant of the marimaba) and Joshua Abrams (double bass, gimbri). a collective trio named Indigeneous Mind. Eastern European and Middle-Eastern influences ran through the first half like a red thread, The singer exhibited her siren-like songs, wordless vocalese and occasional shrieks with equal amounts of playfulness, solemnity, even a bit of shtick. Drake was a model of subtlety, dampening his drums with a cloth, playing them with his hands rather than sticks, not to forget his frame drum he put to good use. But a force of nature like him could not be held down a whole evening. As expected, he showed his muscle after the break, without overdoing it like some other drummers heard. For the most part the music was harmonically grounded throughout, the vibist never short on ideas, the bassist rock steady in his pulse. As for Drake, can one think of another drummer with such a deep pocket?… Regardless of how free or out things go, he knows always where the one is, and listeners feel it, too. Using the Moroccan gimbri, Abrams set a groove on one piece that was surely intoxicating but kept it going a little long. The evening closed with the singer back again, belting out a kind of free form blues while cutting in repeatedly on the vibist’s obbligatos.

In closing, one issue must be addressed with regards to programming, an issue brought up on several occasions by other attendees. The festival’s policy of pairing different bands frequently resulted in programming missteps, some observers expressing their displeasure at having to first endure opening acts (mostly local ones) of dubious character, if not competency, before getting to the main one. In fact, the main show would often start quite late in the evening, surely a drawback for those with day jobs. While not wrong per se, such a policy requires much care on a programmer’s behalf, and a very discriminating ear at that. As the saying goes, two are company, but three are definitely a crowd (as it happened on certain bills). Come to think of it, even two can be one too many.

Reviewed by Marc Chénard with visuals by Pierre Langlois