You are at:Home»Classical Music»Baroque and Early»With This St. John Passion, MasterVoices Announces There’s a New Evangelist in Town
Advertisement / Publicité

Traffic and transit were hobbled, commerce and commuting statistically decimated.

Thus it might seem sheer masochism, or penance, to hazard the elements and venture forth for something so non-essential as choral music.

Perhaps. But blessings were upon those whom the Spirit moved to defy worldly wisdom – a surprising many, as it turned out – and assemble at Carnegie Hall for the choral group MasterVoices’ premiere of its newly-commissioned English-language version of J.S. Bach’s St. John Passion. It was an evening of profound emotion and rare aesthetic satisfaction. 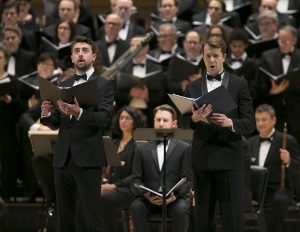 “When we do a choral classic with MasterVoices,” said the group’s artistic director, Ted Sperling, “I’m always interested to see if there’s some fresh way to look at it and listen to it. Robert Shaw [the group’s founder – under its original name, the Collegiate Chorale]performed the Passions [of Bach, both the St. John and the St. Matthew]many times … and he did his own English translations of them, because he wanted to make sure that people really followed every nuance of the story.”

Sperling decided to duplicate and update the effort, and enlisted singer and Germanophone Michael Slattery to render this English translation for the choral group’s current 75th-anniversary season.

The Word Made Flesh

Slattery’s product is exemplary for its theatrical viability. Yes, vowel-correspondence, scansion, stylistic consistency all have quite obviously been subjected to close scrutiny; but, most significantly, the flow and modulation of emotional temperature, even if nuances of meaning are occasionally tweaked, are finely calibrated. Take, for example, Slattery’s translation of the opening couplet of Chorale No. 3: “No greater love – to love as I have shown you, / To know the spirit well, as I have known you”, as contrasted with another (admittedly more “literal”) recent English version: “O mighty love, O love beyond all measure, / Which thee hath brought upon this way of torment!” Slattery’s is lovely, and any “torment” is postponed a bit – on the sound dramatic judgment that the effect of passionate suffering later is thus enhanced.

And Slattery’s version is clothed in language of elegant and direct simplicity – contemporary English rendered without any recourse either to jarringly modish idioms or (another common temptation) any bid for elevation through the glamour of archaism or KJV-Bible-speak, as in the counter-example. Rather, in the spirit of Luther’s German hymns – accessible, vernacular, concrete – and Luther’s translation of the New Testament, on which most of Bach’s text was based, this is English that both works now, and should withstand the test of time.

And, by the way, not only did Slattery translate the text (in consultation with Sperling); he also performed it, taking on the central role of the Evangelist. “The idea of the narrator speaking his own version of the text really excited me,” said Sperling. 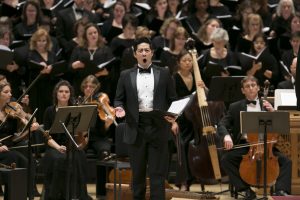 Audiences for this St. John Passion were invited to be more than auditors. Nine of the eleven “chorale” sections were offered for group-sing, with scores made available ahead of time via the MasterVoices website, and an open-to-the-public rehearsal conducted by Sperling the night before the actual performance. Thus, at the top of each participatory chorale at Carnegie Hall on the 9th, Sperling wheeled around to face the audience and conduct its musically brightest and most intrepid with spirited brio.

Those Who Were Chosen

The onstage performers for this Passion were uniformly impressive. Baritone Jesse Blumberg was ideal as Jesus, his rich voice and unaffected diction evoking an ideal balance of authority and holy sufferance. He and bass Adam Lau, as Pilate, masterfully ratcheted up the complex dramatic tensions between them, offering in rich detail the full arc of their two-character morality play within the larger theological and psychological superstructure of narrative recitatives and choruses, chorales and arias surrounding it.

The four additional vocal soloists – soprano Jennifer Zetlan, alto Tamara Mumford, tenor Ben Bliss, and bass Daniel Okulitch – all contributed to a gorgeous, stained-glass kaleidoscope of sound and sensibility, refracting myriad hues of response to and reflections on the meaning of suffering, sin, sacrifice and salvation.

Zetlan handled the work’s two unusual soprano solos with plucky directness – the surprisingly offhand, dance-like cavatina (Aria No. 9) that follows the betrayal in Gethsemane in Part I; and Part II’s equally unexpected, bathos-laden dirge (Aria No. 35) over the corpse of Christ (“Through heaven and earth, may the sad news be spread: / Your Jesus is dead”), a number lacking any hint of Easter dawn, marking, thus, the bleakest hour of this Passion’s dark night’s journey of the soul. 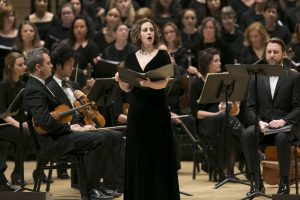 By contrast, the role of the alto of the St. John Passion – along with that of the Evangelist – contains arguably the most spiritually profound material in the work. Indeed, MasterVoices artistic director Sperling has said (in our earlier interview with him, available here) that Aria No. 30 for alto is “almost the whole reason to do the piece.”

Tamara Mumford delivered it with empyreal and oracular poise – moving nobly into place, eyes lifted heavenward, suspending time itself at the awesome tipping point of the drama – the very moment before Christ’s death (“It is fulfilled! His work complete. / What comfort for unfit and stricken souls!”)

The solo tenor might be considered the work’s inner voice of Everyman – the isolated human conscience grappling with the twin insupportabilities of mortal guilt and penitent gratitude. Ben Bliss realized the role with warmth, honesty, and humility, in numbers such as No. 13 (“Ah, my sin, / For thus denying him, / How can I be forgiven?”) and No. 20 (“Consider how his back, / ablaze and blood stained / from every wound sustained / Does with its stripes the heavens outshine”).

The Passion’s bass role establishes a subtext of rich, evolving public dialogue, culminating in a fascinating mixed aria-with-chorus (No. 32) which Daniel Okulitch rendered with moving, palpitant emotion: “Beloved Savior, is it come now? / My salvation, is it come now? / … / … Am I now free?” 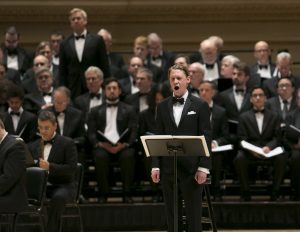 And, as mentioned, tenor Michael Slattery, who did the translation, also performed the Passion’s largest and most crucial solo role, that of the Evangelist – a figure whose identify (as in the biblical Gospel of St. John) is never quite named and yet is self-evident – i.e., none other than the gospel’s putative author, the beloved disciple John himself.

Slattery’s voice possesses both a uniquely ethereal lyricism and a broad spectrum of coloristic effects. His limpid empathies at every turn – the shiver of his voice when narrating Christ’s scourging; the lurid marvel in his describing the rending of the temple veil and the breaking open of graves – were superb.

Finally, the MasterVoices choral forces worked their customary and acclaimed sonic alchemy under Sperling’s leadership, pouring forth example after example of cultivated register-melding, deployed with equal felicity upon both the introspective chiaroscuro of the chorales and the edgy and volatile character work Bach assigns the savage mob.

Faces in the Crowd 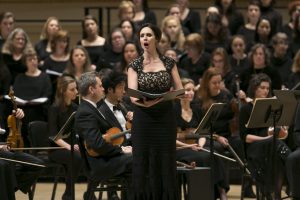 Among the four canonical gospels, John features many distinctive elements, and provides a wealth of colorful details lacking in the other three. His gospel also has at its center both a uniquely intimate relationship between its author and Jesus, and a more fully developed and vivid depiction of the many who followed him – and the many who rejected him – as Christ.

This last element is one of the keys to what makes Bach’s St. John Passion so effective and full-blooded as a dramatic work. The choral presence at the arrest in the garden; the crowds shouting down Pilate, calling for crucifixion; a rueful people too late lamenting their loss as Christ is entombed – it all makes this Passion so indelibly, so emotionally memorable.

Slattery is clearly alive to this. His chorus language provides spot-on drama throughout. And, again, he is not reluctant to depart from a strict interlinear correspondence to the original text, if it means creating an equivalent or even starker dramatic effect, as in his text to Chorale No. 37: “God, my God, what have we done? / We have slain our Savior. / May I now slay, one by one, / Every moral failure.” The raw candor and emotional impact were stunning. 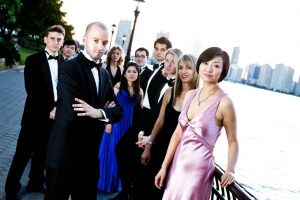 New York Baroque Incorporated, the instrumental ensemble for the evening’s performance, was of course completely within its wheelhouse in performing Bach’s Passion, and they were magnificent. Billed in their promotional material as a “conductorless orchestra of period instruments,” the ensemble nonetheless proved that they can play well with others in supporting Sperling and the 150-voice-strong MasterVoices membership. The orchestra’s sound is thewy and rich, somewhat darker than what one might be accustomed to hearing in most modern Bach renditions, with a bite and alkaline astringency nowadays displaced in favor of sweetness and light. Indeed, the audience was alerted even before the performance commenced that aural adventure lay ahead, as the group tuned up to the plump sonority of a burnished, coal-fire-warm baroque concert “A.”

There are quarters in which the texts of Bach’s religious music are dismissed as incidental, regarded as mere pretext for the composer’s purely musical invention. Thankfully, Sperling and MasterVoices – and translator Slattery – feel differently, and chose here to highlight, even prioritize, the text and the story it tells. This is almost surely consistent with Bach’s own highest ideals: he is reputed to have cherished his editions of the Luther Bible and other of the great reformer’s works. Moreover, he was sustained in both his faith and his artistic vocation alike by the assurances that Luther’s legacy vouchsafed about the spiritual primacy of music.

“”[T]here is nothing rarer in the whole world,” Luther himself asserted, as recorded in the famous Table Talk collation of his sayings, “than a song adorned by so many voices.”