You are at:Home»Arts Industry»An Evening of Epiphany in a Blizzard of Ideas
Advertisement / Publicité

On a treacherously snowy evening in the doldrums of January, eight guests have braved the elements to attend an exclusive soiree in a ramshackle old Victorian house, probably located north of New York City along the banks of the Hudson.

That’s the launch point of playwright Brian Watkins’ sly new existential satire, Epiphany. Things only get stranger, livelier and at times hilariously funny from there. The free flow of wine prompts angsty confessions, the spitballing of extemporized philosophical musings, and a tournament of general rhetorical oneupsmanship that evolves into a sort of ad hoc symposium on civilization and its discontents.

And all the while the suspense mounts. Will Gabriel ever arrive? 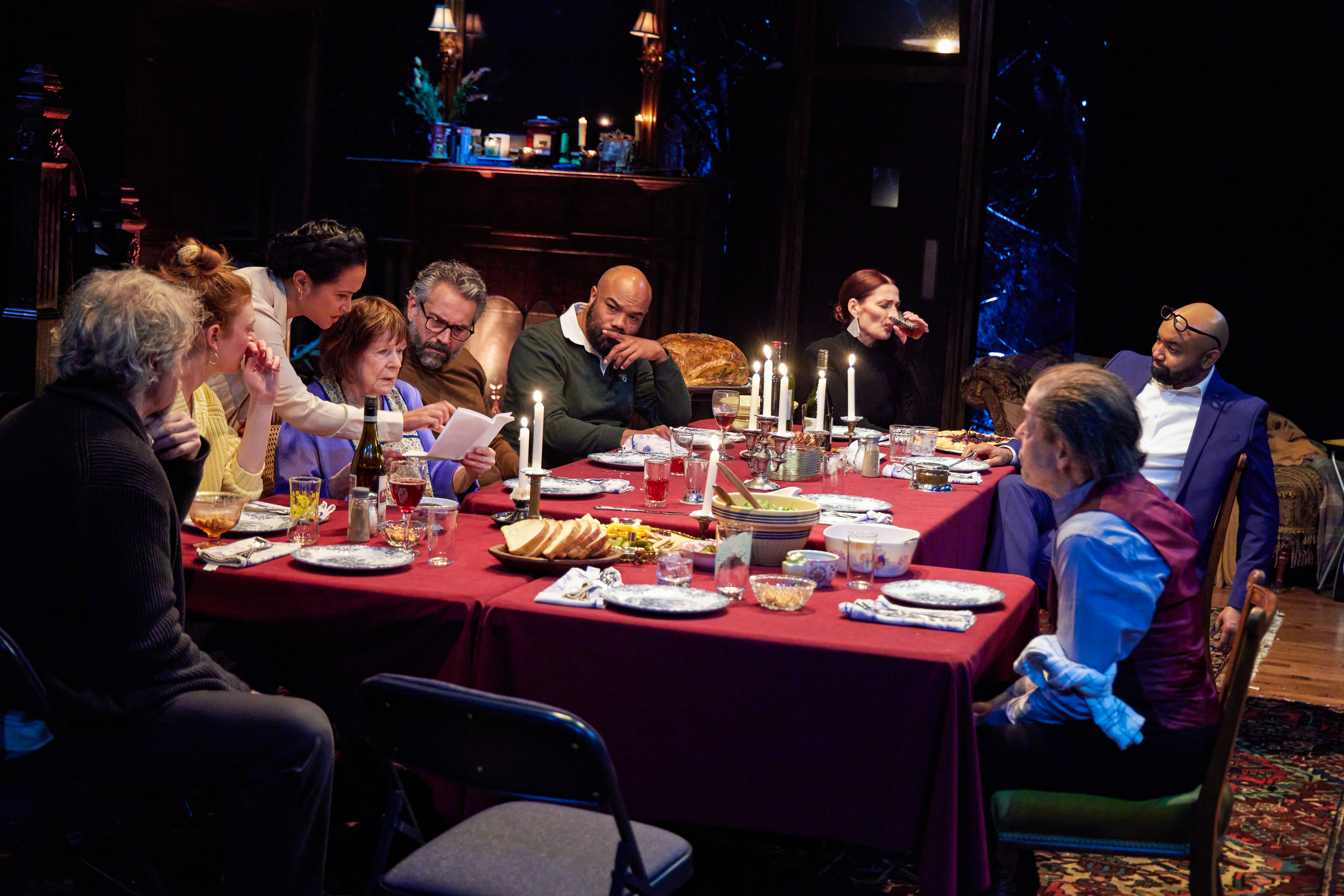 Guess Who May Not Be Coming to Dinner

Watkins effectively modulates from the quasi-realist tone of his setup into keys of absurdist humor and time-bending surrealism as the play progresses until the evening turns into a sort of comic purgatorio, where literal action, freewheeling religious allegory, psychological satire and existential dread mingle combustively. Think Waiting for Godot meets A Delicate Balance with a soupcon of A.R. Gurney cocktail chatter thrown in and you have a fair idea of the world of Epiphany.

Do these bibulous middle-class critics really lament – or even understand – the social brittleness and spiritual impoverishment of our time? Or are they just self-referencing representatives of it?

The discreet charm of the bourgeoisie, indeed. 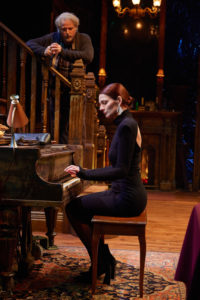 The design, casting and direction of this inaugural production of Watkins’ novel and enigmatic work are all first-rate. The set by the estimable John Lee Beatty is a spectacularly detailed and appropriately distressed environment – dusty wood paneling, imposing outsized windows, a grand staircase with (of course) thirteen steps ascending into murk above, and translucent walls through which, throughout the performance, we are aware of the sinisterly accumulating snowfall outside.

Director Tyne Rafaeli keeps her large cast in impressively plausible circulation, and has pulled off a symphony of vocal layering, overheated exchanges and awkward silences that ring with a truth rarely encountered in sizable ensemble theater pieces. 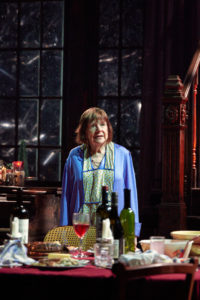 The actors are uniformly well cast and engaging. Particularly notable is Marylouise Burke who plays the petite chatterbox of a hostess, Gabriel’s aunt Morkan, with astonishing vigor, bustling upstairs, downstairs, in and out of the kitchen, a veritable Tasmanian devil of hospitality.

C.J. Wilson plays the local handyman and lush, Freddy, with both brio and nuance. Rising to the challenges of the play’s most physically comedic role (the big-framed Wilson pulls off several feats of slapstick with Chaplinesque delicacy), Wilson also carries in full stride the character’s eventually revealed freight of countervailing pathos.

Heather Burns as the tightly wound and affected musician, Kelly, is a delightful behavioral study of the type of character Tom Wolfe would dub a social x-ray.

Jonathan Hadary brings an air of compelling stillness to Morkan’s cryptic longtime friend, Ames; while Carmen Zilles is marvelously poised, even ethereal, in the role of Aran – Gabriel’s presumed significant other. Her a cappella performance of an old folk song is a moving and memorable episode in the evening’s unfolding son-et-lumiere show of emotional variations.

The current production runs through Sunday, July 24, 2022, leaving a perfect window for midsummer audiences to savor an evening of mysterious and entertaining midwinter Epiphany.

More information about and tickets for Epiphany may be accessed at: www.lct.org/shows/epiphany