The towering masterpieces of the late baroque tend to block our view of worthy earlier scores. One such is the Christmas Story of Heinrich Schütz, a 40-minute oratorio published in 1664 that focuses squarely on the Biblical account and deploys both voices and instruments in creative ways. The Toronto Consort under the supervision of former artistic director David Fallis gave it an intriguing airing on Dec. 14 (the second of three performances) in the Trinity-St. Paul’s Centre.

By far the biggest job is that of the Evangelist, whose recitatives sometimes run longer than two minutes. One might argue that Bach, decades later, had a better sense of how to balance narration with solos, ensembles and choruses. On the other hand, as Fallis explains in his excellent program note, Schütz was making the most of operatic recitativo as he had experienced it in Italy. It was a relatively novel procedure in Dresden (even Germany). 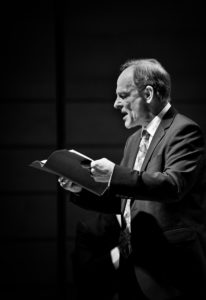 In any case, the demands on this central figure are considerable, and I am not sure the veteran British tenor Charles Daniels brought enough in the way of tonal projection or crisp articulation to the role. What he offered in abundance was sincerity, a hard-to-define quality that also happens to be indispensable.

Eight vocalists functioned as a chorus and came together in various combinations to represent the priests, shepherds and Magi. Two were pressed into service as soloists: soprano Katherine Hill, too light and boyish as the angel; and bass Joel Allison, a resonant and believable Herod. His aria (Intermedium VI) was a highlight, if that is the word. Low notes added what I heard as a subtle element of villainy as the ill-intentioned ruler advises the Wise Men of his supposed wish to worship the Christ child.

Ensembles went well and a squad of period instrumentalists provided apt dashes of colour: cornetts and sackbuts for the regal interludes, shimmering violins for the angels, recorders for the shepherds. Fallis stood at the organ console, playing or conducting as the need arose. Counterpoint was orderly but I craved more dynamic highs and lows. And, in the concluding chorus, a more forceful expression of joy. We might debate the historical merits of the matter, but bigger can be better.

The first half comprised a selection of Latin and German motets by Schütz and his countrymen Johann Hermann Schein and Hans Leo Hassler (all of whom imported Italian practices to Germany). Schein’s Quem vidistis, pastores was one of the most impressive selections, its chordal and polyphonic elements deftly contrasted. Hassler’s a cappella setting of the same text was in a more orthodox Renaissance style. Schütz’s Lobet den Herren (from the Psalmen Davids) praised the Lord in colourful ways. Another Schütz treatment of Psalm 150 found Daniels in warmup mode.

The printed program was nicely organized, with Latin, Luther and the King James Version (rather than some modern abomination) rendered in readable type. In all, an interesting concert, warmly applauded.