You are at:Home»Classical Music»Baroque and Early»Some serious fun at the Montreal Baroque Festival
Advertisement / Publicité

The governing theme of the Montreal Baroque Festival this year was sprezzatura, an Italian word defined as nicely-calibrated nonchalance by Baldassare Castiglione in his Book of the Courtier (1528). The choice allowed for a preponderance of Italian repertoire, a concentration on venues in Little Italy, a philosophical attitude toward late starts and, on Sunday, the spectacle of co-artistic directors Susie Napper and Matthias Maute locking arms on the stage of the Théâtre Le Chateau, each with a glass of wine, and thanking the various collaborators who made the 17th edition possible. 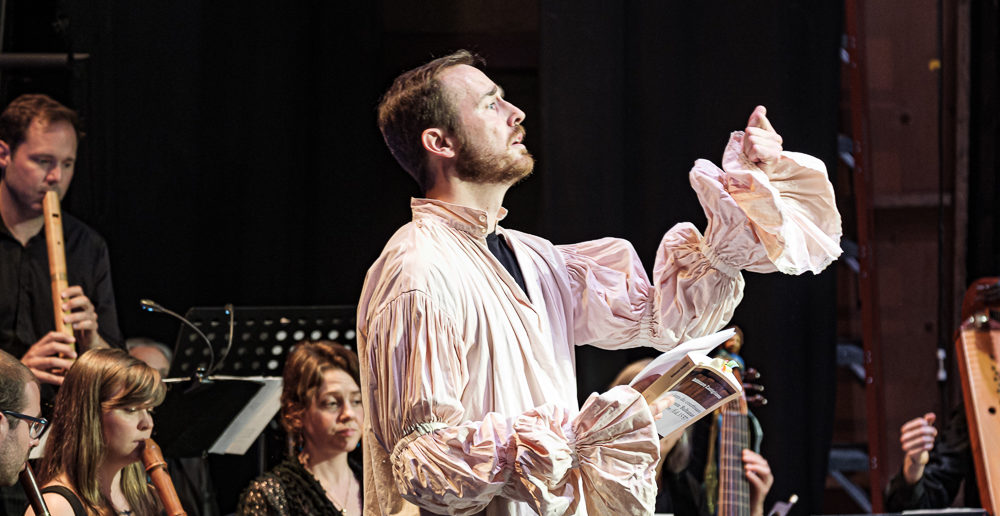 “Concert” would not quite do justice to the show, titled Il Cortegiano, that followed. As well as vocal and instrumental selections, we had period dance and a little fencing presented in a dramatic framework that cast the five members of the (vocal) Ensemble Alkemia as easy-going, cellphone-consulting hipsters and the multi-talented actor Renaud Paradis as a comic master of ceremonies who reads prescriptions from the aforementioned Renaissance handbook and is then required, with generally amusing results, to practise what he preaches.

All the fun would have been of no avail without high performance standards. There was nothing slipshod about the singing in robust 16th-century Italian madrigals by Girolamo Conversi and Andrea Gabrieli or earlier, more austere Flemish numbers by Josquin des Prez and Guillaume Dufay. Polyphony was clear and equitable. Soprano Dorothéa Ventura provided a burnished top. Tenor Philippe Gagné was an expressive advocate of a monody by Giulio Caccini, who was, according to the program, the first composer to invoke sprezzatura as a performance virtue in music. Even Paradis (who sometimes joined the Alkemians) had a modest solo, reportedly derived from a bas-relief at the ducal palace of Urbino (the court profiled in Book of the Courtier).

The singers in causal garb often ignored the fourth wall of this classic proscenium theatre by hanging around on (or in front of) the apron. The costumed and formal dancing of Les Jardins choréographiques made for an agreeable contrast. An onstage group comprising three recorders from Flûte Alors! and five members of the Bande Montréal Baroque (including a harp rather than a harpsichord) provided spirited backup. Vincent Lauzer of the former group sounded so pure and articulated so beautifully he was almost a problem. Margaret Little traded her bass viola da gamba for a treble instrument to play a cover of the late-medieval setting of O rosa bella by Johannes Ciconia.

This pleasant miscellany, heartily applauded by MBF devotees, drew attention to the surprising acoustics of this handsome 1931 Art Deco movie palace near the Jean Talon Market. One would never suppose unamplified sounds could be projected clearly from a stage so heavily laden with drapery. A little restoration would make Le Chateau a worthy space for music.