There is nothing like working in a room with singers in person,” Richard Margison, the new artistic director of the Canadian Vocal Arts Institute, said from his home in Stouffville, Ontario. “It’s the best of all possible scenarios.”

Many listeners would contend there is nothing like sitting in an auditorium and hearing a singer in person – an option that has been distinctly on the wane since March of 2020. But teachers will teach and singers will sing. This year the CVAI – cancelled last ­summer for the first time since its founding in Montreal in 2004 – takes place substantially online.

The three-week vocal academy, running from June 6 to 26, will continue to emanate from the Université de Montréal. This is where, not quite coincidentally, Margison, whose ringing tenor voice could be heard in 14 consecutive seasons at the Metropolitan Opera starting in 1994, is employed as an adjunct professor.

“Most of us are used to teaching online now,” Margison comments. “It has some benefits.”

The greatest advantage, of course, is the unlimited reach that the ­Internet extends to students and teachers alike. It would hardly be possible to offer CVAI participants a master class with the star American tenor Matthew Polenzani were it not for the convenience of an audio-video link to Europe.

At press time Margison was not sure whether COVID regulations would permit him to teach on campus. American faculty, of course, must work remotely. In any case, there will be in situ teaching at the Université de Montréal by a clutch of coaches and répétiteurs, among whom the pianist Francis Perron is a notably experienced example.

As for the students, most in their early 20s, about 25 are Canadians or residents following the program on campus. About a dozen foreign students will join in electronically and extramurally. Almost anything is possible in 2021.

The faculty gives every indication of being worth the technical effort. Among the instructors are the American vocal coach and Metropolitan Opera prompter Joan Dornemann (who, with conductor Paul Nadler, founded the CVAI); and her compatriot, the mezzo-soprano Mignon Dunn, who made the first of her 653 Met appearances in 1958. Add veteran Canadians like soprano Rosemarie Landry, co-head of voice at the Université de Montréal; tenor Benjamin Butterfield, head of voice and co-head of performance at the University of Victoria; and coloratura soprano Tracy Dahl, a voice teacher at the University of Manitoba since 1997; and the result is a high level of vocal know-how.

While the 2021 performance schedule for the CVAI does not include a staged opera, there are plans to present concerts devoted to Mozart (June 10), French operatic repertoire (June 12), French mélodies (June 17), bel canto (June 19) and German Lieder (June 22). The concluding gala of June 26 (like the other concerts, performed in Salle Claude Champagne) will bring together a variety of arias and ensembles.

These events and the master classes by Dornemann (June 8) and Polenzani (June 15) will be online on the relevant evenings. The ­webcasts are free and available at the CVAI Facebook page. There is also a “Met to Broadway” program on June 25 that will test the versatility of the participants. No one could accuse the CVAI of tunnel vision.

“The more we have in our arsenal to offer, the better we can assure being busy in this industry,” Margison says of the wide range of repertoire. Having started his performing career as a folk-rocker in the 1970s – “I was going to be the next Gordon Lightfoot” – the tenor is by no means averse to crossover migration. He has even cultivated a Sinatra-friendly post-operatic career singing duets with his daughter, the prizewinning soprano Lauren Margison.

MENTORING THE NEXT GENERATION 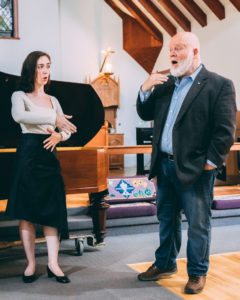 Now his concentration, however, is distinctly on education. “Teaching is a passion,” he says. “Mentoring the next generation of opera singers, making sure there is a place for them. Letting them achieve their dreams.”

Artistic director of the CVAI, Margison is also head of vocal studies at the Highlands Opera Studio, a professional training program set in the picturesque Haliburton region of Ontario, which he operates every summer with his wife, the violist and stage director Valerie Kuinka.

This is substantially an online year for Highlands, but not an idle one, as it includes 13 webcast concerts over 13 weeks (the series started in May but subscriptions are still available). COVID willing, there will be live events in August, possibly including two performances of a ­reduced and reconfigured version of Mozart’s Don Giovanni, with Margison himself in a newly conceived spoken role.

The Leporello Diaries is the title, and 90 minutes the duration. ­Margison finds the estate documents of the Don’s servant Leporello, including the notorious catalogue of conquests, and shepherds the ­audience through the musical highlights.

“The plans are in place,” Kuinka adds over the same home phone line, “but as is customary these days, everything is TBD and TBC.”

Whether in Haliburton or Montreal, online or in person, certain ­basics apply. Patience is the most important word in Margison’s lexicon.

“WE HAVE TO BE CUSTODIANS”

“There are people who are born with a voice, but by the same token you have to know how to handle that instrument, to make sure that it’s shown off to the best,” he says. “We have to be custodians. We have to be sure that every time we step on stage we’re doing something that is technically and emotionally right.”

Renowned for his durability, the Victoria native credits his robust career to solid early training from the soprano Selena James (1922-2019) and the tenor Léopold Simoneau (1916-2006). Both were residents of the British Columbia capital.

“So much of it is having the guidance of somebody who can tell you no,” Margison says. “Sure, you may sing this role someday. The key is patience. Which is difficult, because you have to make a living. But if you do roles too soon, you’re going to be an up-and-down star over a few years rather than going on for decades.

“All too often people are pushed into roles that they might sing in a decade. You have to learn how to incorporate stamina into what you do. You can’t just fall out of bed one morning and decide that you’re going to sing in a Verdi or Wagner opera.”

Psychology is part of the regimen at CVAI and Highlands. “Sports celebrities have psychiatrists,” Margison observes. “There are days when, as a voice teacher, I feel like a psychiatrist or psychologist.” 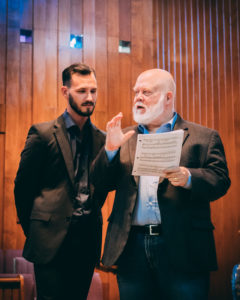 The psychological stakes are high in the COVID era. “This is not something anyone can sail right through,” Kuinka notes. “We have to help these young people not only in professional training but in acknowledging their mental health and empowering them to work at this time. This is true whether they are at the university level or post-­university level in CVAI, or at the ­professional level at Highlands.”

“The more performance opportunities we can offer young people, the better,” Margison says. “That’s the best possible over nerves and realize just what they need to do to win over an audience.”

Like most of his colleagues, Margison coaches all voice types. “I think when it comes to bel canto singing and the art of singing in general, I think we all find a similar line in terms of technique,” he says. “Breathing is the most important thing that we do.”

He does not deny that the world lacks good tenors. Tenors with some heft. Tenors like…Richard Margison.

“Every once in a while we go through a bit of a drought of a particular type of voice,” he says. “But I think we have some people on the horizon who, given the right training, will fill those roles.”

Regardless of the basic voice type or specific Fach, we can expect to see a blossoming of Canadian talent as the pandemic subsides. “Canada is blessed with a legacy of great vocal prowess on the stage and that is continuing,” Margison says. “We are exporting a lot of
talent. That’s really exciting.”

And it is exciting to be one of the enablers of this export. In September Margison moves up the ladder at the Université de Montréal ­faculty of music by becoming director of the Atelier d’opéra.

This means Margison will see his apartment on Sherbrooke Street West for the first time since March of last year. He will be teaching predominantly in French. “I’m taking courses in French diction ­myself,” he confesses. “I’m learning and working very hard.”

Whatever the setting, Kuinka and Margison do not disguise their preference for in-person instruction. Despite the vaunted luxury of working from home, the online dynamic is oddly exhausting.

“Part of the energy goes into this digital technical device that sucks it away,” Kuinka comments.

Still, the benefits are undeniable. “We can have these young people face-to-face with the greatest artists in the world in this format,” Margison says. “Geography doesn’t enter into it.”

Costs are obviously a fraction of those entailed by transtlantic (or even domestic) travel. Outreach to more remote communities becomes viable.

Many were the lessons learnt in 2020. The question now arises as to what vocal training will look like in the summer of 2022.

“I think we all agree that we will be back to normal next year,” Kuinka says, referring to the general health of society. “But what do we want to take from this experience? Can we create a hybrid?”

Online master classes are an obvious growth area. The Highlands curriculum also includes question-and-answer sessions with industry leaders – people who simply could not make it to Highlands Opera Studio, whatever its cottage-country charms.

The new virtual world also offers hope to opera as an art form. Some have been making dire post-pandemic predictions. Margison is not one of the doomsayers.

“I’m thinking positively about it,” he says. “I don’t know that the huge productions are going to bounce right back. But this has opened a lot of ideas within the art form, with all the webcasts.

“We’re going to see more grassroots things happening, a lot of more technologically based things. But opera itself is safe. It will proceed in whatever way it does after we’re back to work.

“It will be a while before we get full audiences, obviously. There will be a period of time when people are afraid to go into public areas. But we’re going to get there and it’s going to be healthy.”