Kent Nagano has been favourably disposed to residents of Vienna – Beethoven, Bruckner, Brahms, Mahler – from the beginning of his tenure with the OSM. I do not recall his ever having given a standard light “Viennese” program of the type that used to be offered yearly by orchestras around the globe. He came close on Wednesday evening in the Maison symphonique, with variable if ultimately wonderful results.

The concluding selection, Johann Strauss Jr.’s Emperor Waltz, was the highlight. Nagano is not known as a liberal tempo manipulator, but he seemed to understand all the ins and outs and comings and goings of this magical piece. The 1-2-3 beat was infectious and the beauties of the orchestration were captured to perfection. Associate principal cello Anna Burden was one of several individuals to make affectionate contributions. Principal flute Tim Hutchins, back from an extended leave, was another. Score this as one of the great OSM/Nagano outings. 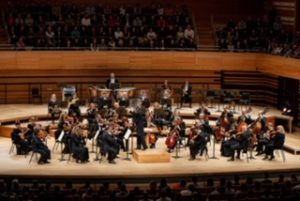 Making ample use of his left hand throughout the concert, the conductor brought an agreeable lilt to the Ballet No. 2 from Schubert’s Rosamunde music. Strings and woodwinds were nicely balanced. First and second violins were coupled stage right, in violation of contemporary fashion. Possibly Nagano felt that in a reduced orchestra the sections could not speak with stereophonic independence.

It seemed to me that they were both outmatched by the winds and timpani in a not-quite-polished rendition of Schubert’s Symphony No. 1, from the composer’s 17th year. The last OSM performance of this remarkably ambitious (and, at half an hour, by no means brief) work was in 1986 under Charles Dutoit.

Joseph Lanner’s Die Schönbrunner (his Op. 200) was interesting for its pre-Johann-Straussian elements. But it should be noted that this program was formally part of the OSM’s Schubert festival, which explained the presence of tenor Ian Bostridge in evocative orchestrations (by the contemporary German composer Detlev Glanert) of two lieder by the master.

A lanky fellow even by Nagano standards, this Englishman attempts to compensate in sincerity and intensity for what he lacks in colour and force. He nicely underlined the changes in tempo and mood in “Viola,” a lengthy ode to a springtime flower, and the much better known “Das Lied im Grünen.” The music was on a stand but seldom consulted. Odd that Bostridge instinctively lifted his hand to his mouth to cover the occasional cough. Without that gesture, few beyond the first rows would have noticed.

On Friday evening Bostridge will sing the first half of Schubert’s Winterreise in the concluding program of the festival. The considerable pianist is Angela Hewitt. Then Nagano gives us the Symphony No. 9 “The Great,” a work he performed with the OSM in 2011 and 2017 – not to mention the 2003 concerts that landed him the job of music director. www.osm.ca.