Like many things musical in 2021, Montréal/Nouvelles Musiques, in its 10th edition, will be a little out of the ordinary. The biennial festival organized by the Société de musique contemporaine du Québec is almost certain to offer all its programming online. Nothing unusual about that in the COVID-19 era.

But unlike most undertakings linked by name with Montreal – probably unlike any – Montréal/Nouvelles Musiques will start in Vancouver. Then travel, musically, to Istanbul, Iran, Tajikistan, Japan and Bali, courtesy of the Vancouver Inter-Cultural Orchestra, or VICO for short.

“We haven’t had a performance for a big ensemble in over a year,” said Mark Armanini, the orchestra’s artistic director. “This is quite special.”

However prodigiously innovative the opening webcast might seem in content and transmission, VICO itself is well established. Founded in 2001 and staffed substantially by musicians of Chinese and Persian descent, the ensemble was the recipient in 2012 of the City of Vancouver Cultural Harmony Award.

In normal times VICO presents mostly chamber scale concerts, notably in the Global Soundscapes Festival, which takes place at the Waterfront Theatre on laid-back Granville Island. When numbers and complexity warrant, a conductor is hired, in this case Janna Sailor, a native of Saskatchewan well known in Vancouver for her innovative work in multiple genres. 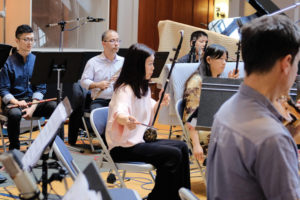 The VICO roster on Feb. 18 will total 19 including Sailor, though not all musicians will be deployed in every piece. It is not the quantity so much as the variety that inspires wonderment. Along with the usual suspects – flute, oboe, clarinet, violin, viola, cello and double bass – we find such non-European instruments as ehru, sanxian, santur, setar, tar and oud. All speaking the universal language of music in an intercultural parliament.

Unlike most traditional ensembles, VICO is open to contemporary music written to make the most of these instruments.

“Our philosophy is to start with the traditional,” Armanini says. “These are the sounds that our players know. But we want them to be able to adapt to contemporary music and try those ideas.”

It can be a delicate balance. Not all world instruments are designed to produce chromatic lines and complex harmonies, just as many sounds formerly deemed “exotic” in the West are beyond the scope of Western instruments and practice.

“You have to get to know the instruments and know the players,” Armanini says. “They come from very different backgrounds. If you throw something too difficult at them, that does not work. Even following a conductor is one of those things that people really have to focus on.

“But we have been doing this for 20 years at VICO, so we know the limits and also what the players are capable of.

The opener of the MNM program, John Oliver’s Gypsy Chronicles of 2010, plots the westward progress of Roma music from India. Farshid Samandari’s Suite concertante of 2016 conceives of the last 150 years of Iranian history as a selection of fine rugs. As in the Oliver, the Persian tar, setar and santur will share the soundscape with Chinese instruments.

“It’s amazing how well they fit together,” Armanini says. “Even though the techniques are quite different and the players are looking for different things. The Chinese do a lot of blending and glissando, where the Persians do more ornaments and perform in a decorated style.”

Pareidolia, a commissioned piece by the Tajik-Canadian composer Farangis Nurulla-Khoja, makes use of the sheng, a Chinese mouth organ that has been around for 5,000 years, as well as the oud, a Middle Eastern lute that is also no newcomer.

“The challenge for composers is to adapt the kinds of lines they write for these instruments,” Armanini notes. “Farangis dived right in.”

One of the more challenging works to represent fairly in a webcast will be Rita Ueda’s As the first spring blossoms awaken through the snow. This Japanese-born Vancouverite uses graphic scores and requires musicians to move during performance.

“Minimal Japanese in a way,” Armanini says of the piece, which was receiving its finishing touches at press time. “Delicately crafted lines and textures. And lots of quieter moments, which go well with the other pieces.”

Finally, VICO will give us a new version of Pulau Dewata, Claude Vivier’s 1977 celebration of syncopation. The late Montreal master did not specify instruments, which has led to many arrangements.
“I was surprised when Walter asked us to do that,” Armanini confessed, referring to SMCQ artistic director Walter Boudreau. Creating a version for intercultural orchestra would not be easy, given the complexity of Vivier’s time signatures. But his writing also implied the sonorities Armanini had at his disposal.

“I knew what to do with the orchestration, which instruments to give to each line,” he said. It helped to have the option of assigning the “chromatic and angular stuff” to Western instruments. Colour comes from the East, notably the suona, a Chinese double-reed cross between an oboe and trumpet. The mix, in his view, creates “a rougher, more natural” realization of Pulau Dewata than a purely Western ensemble could produce.

We hear a lot these days about cultural appropriation. In VICO it is difficult to determine who is appropriating whom.

“I was accused of this many years ago, in the early 1990s,” says Armanini, who also teaches composition at Capilano University and works with the B.C. Chinese Music Ensemble. “I haven’t heard a peep since.

“The basic principle at VICO is that we are building together with the players. We are building technique and repertoire. It is not us telling them what to do. That has negated a lot of that problem.”

An interesting question is how the intercultural ideal that VICO represents will evolve. If styles interbreed freely, will they lose their individuality and cultural identity?

“Perhaps in five or 10 years we won’t talk about intercultural music anymore,” the composer Farshid Samandari said in a video interview. “We will talk about different styles of music, and if the intercultural element becomes part of the fabric of society, [this means]that humanity is moving from living in a small village to a more globalized society.”

The opening webcast of the Montréal/Nouvelles Musiques Festival will be available on Feb. 18, starting at 7:30. Go to www.smcq.qc.ca.