For 10 days in March home viewers will be able to compare the old ­upstart, Yannick Nézet-Séguin, with the new kid on the block, Rafael Payare, in the same piece of music, on the same day if desired, as ­performed on the same stage. YNS launches a Brahms cycle with the Orchestre Métropolitain on March 12 (available online through March 21) with that composer’s First Symphony. This was the score with which Payare, Montreal Symphony Orchestra music director ­designate, chose to introduce himself online on Jan. 10 in the Maison ­symphonique. MSO replays are available on www.medici.tv through April 11. For the OM webcast, go to www.orchestremetropolitain.com. ­Payare does not know Nézet-Séguin but admires the Montrealer’s work. “He’s a fantastic musician,” Payare told this writer in an interview. “I ­really have the utmost respect and admiration for him. His recordings of the Schumann Symphonies with the Chamber Orchestra of Europe are phenomenal. And just to mention a few. I hope to get to know him in person, soon.”

Yannick Writes to Biden and Harris

Attempting to leverage his position at the Metropolitan Opera and the Philadelphia Orchestra, YNS wrote an open letter to Joe Biden and Kamala Harris the day before their inauguration in which he called for greater support of the arts and specifically the creation of a secretariat. “…I ask that you consider appointing a cabinet level champion dedicated to arts and culture,” the conductor writes. “In order to progress, to elevate the arts, we need a voice at that table that will be heard.” There are sombre ­reflections on the “catastrophic” effect of COVID-19 on artists and the regrettable record of “the last four years,” during which the President’s Committee on the Arts and the ­Humanities was disbanded. At the ­beginning of the letter Yannick confesses to being Canadian but calls himself “a proud artistic citizen of the United States of America.” The valediction includes all three of his titles — music ­director of the Met and Philly and “directeur artistique” of the OM. No response from Washington was known at press time. ­Yannick was not all talk in January: He offered to match contributions to members of the Met Orchestra and Chorus, who have been out of work and unpaid since April. Music directors are usually expected to remain neutral in labour disputes. Yannick’s partner Pierre Tourville is also named as a donor in this fundraising initiative.

St. Louis Symphony Orchestra music director Stéphane Denève and president/CEO Marie-Hélène Bernard have announced the appointment as assistant conductor of Stephanie Childress, who is described as Franco-British. Denève is French. Bernard has been an orchestra executive in the United States since 1996 but before this “practiced corporate and tax law in Canada” and according to the official biography “remains a member of the Quebec Bar Association.” She is an alumna of Collège Jean-de-Brébeuf, the Université de Montréal and Concordia. All SLSO concerts this season are cancelled but orchestra musicians as of mid-January receive 85% of their base salary of US$96,376. “We are humbled by our patrons’ continued dedication and support,” Bernard said.

Up-to-Date Dean for U of T 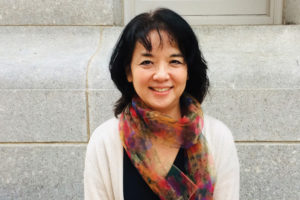 The University of Toronto has named Ellie Hisama as dean-to-be of the Faculty of Music. From her Columbia University profile page: “Her research and teaching focus on interdisciplinary studies, race, ethnicity, gender, sexuality, and the social and political dimensions of music.” Recent papers ­include one given at Cornell University on “seeing queer black aurality in the work of Julius Eastman.” In 2015 Hisama was the keynote speaker at a graduate symposium at McGill. The title of her talk: “‘Blackness in a White Void: Music in the Films of Isaac Julien.” One of her three book credits is as co-editor of Critical Minded: New Approaches to Hip Hop Studies. Another is as the author of Gendering Musical Modernism: The Music of Ruth Crawford, Marion Bauer, and Miriam Gideon. Not that Ruth Crawford (Seeger), 1901-1953, for all her progressivism, gets a free pass. In 2017 Hisama gave a talk in which this composer’s ­decision to set excerpts from the Bhagavad Gita in an invented ­language was examined “as a possible case of orientalism or cultural appropriation.” Hisama succeeds Don McLean in Toronto, whom some readers will remember as dean of music at McGill in the 2000s. Her five-year term starts on July 1.

Deutsche Grammophon has ­declared John Williams in ­Vienna (DG 4836373) to be the best-selling orchestral album of 2020. The claim seems viable in view of the numbers offered: 150 million streams and 100,000 sales since its release in August. Recorded live on Jan. 18 and 19, 2020 – prior to the general outbreak of COVID-19 – with the Vienna Philharmonic in the Musikverein, the 74-minute program includes ­selections from Close Encounters of the Third Kind, War Horse, Hook, Jurassic Park, Jaws, E.T. The Extra-­Terrestrial and various incarnations of the Star Wars series. Violinist Anne-Sophie Mutter is heard in Devil’s Dance from The Witches of Eastwick and Raiders March (from Raiders of the Lost Ark). “Like an imperial battle cruiser navigating the cosmos of his creations, the ­Vienna Philharmonic visibly and audibly relished this voyage,” wrote Der Standard. Norman Lebrecht was more circumspect in his no-star review: “Played by a Hollywood pick-up orchestra, the score for Close Encounters of the Third Kind sounds hair-raisingly spooky. Played by the Vienna Phil it’s like Halloween in the Stefansdom, a ­confection of contrary myths – too slick, too false-dramatic, too servile to the film to be independently credible.” Universal Music Canada will release a new edition with bonus tracks on Feb. 5, three days before Williams’s 89th birthday.

Lady Gaga Adds a Little Something 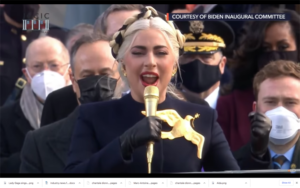 No question about it: “The Star-Spangled Banner” is in triple time. Three-four is the time signature of the version authorized by a committee (including John Philip Sousa) in 1917 and adopted (along with words by Francis Scott Key) as the U.S. national ­anthem in 1931. So why did Lady Gaga add a beat at the inauguration ceremony of Joe Biden, turning the lively three-four into ponderous common time? (“Oh say-yay can you see-yee-yee.”) She is not the first singer to make the stretch. Renée Fleming added a spurious second beat at Super Bowl XLVIII in 2014 but revved it up to three-four (as did Gaga, with distortions) in the last eight bars. Possibly this shortcut to acceleration is the attraction. Gaga also added a stretch to “still there” that was somewhat reminiscent of the prolongation of “five gold rings” in “The Twelve Days of Christmas.” Not that any of this was surprising. Lady Gaga’s performance was by the book compared to some interpretations of the much-mangled anthem. Footnote of interest: the English drinking song on which ­“The Star-Spangled Banner” is based was in six-four time.

A study conducted in November at the Konzerthaus Dortmund using the epidemiological equivalent of a crash-test dummy concluded that ­“checkerboard” seating in a properly ventilated hall will result in safe conditions for concertgoers. Measurements were taken in the auditorium and in the lobby area. “Especially in the hall, under the given ­conditions,” the researchers conclude, “the risk of spreading infections through aerosol transmission can almost be ruled out.” Among the ­interesting observations was that the body heat of spectators promoted the upward movement of air. Mask-wearing is nevertheless advisable in corridors and cafés, where ventilation is less predictable. The study was undertaken by the Konzerthaus, the Fraunhofer Heinrich Hertz Institute, and the German Federal Environment Agency. “Concert halls and theatres are not places of infection,” says Dortmund Intendant Raphael von Hoensbroech. “The past months have shown that ­politicians need a scientifically sound basis for decision-making.” A summary of the study and a video are available at www.konzerthaus-dortmund.de.

Both Orford in the Eastern Townships and the Domaine Forget in Charlevoix will be operating as music academies this summer. The question is how. “In the context of a pandemic, we believe it is important to be open and flexible,” writes Orford on its website, “so we are considering two possible scenarios for the summer Academy.” These are “a 100% virtual academy” and “a mix of face-to-face and virtual education.” The camp promises a decision by the beginning of April. Domaine Forget sounds more positive about the in-person option. “More than ever, we want to hear you play and see you dance, and we have put everything in place to make it happen again this year, whether online or in person,” is the statement on the website. “Nothing beats a summer stay at Domaine to immerse yourself in your art and make leaps and bounds. But if travelling is not an option for you, we have set up many e-learning sessions.” 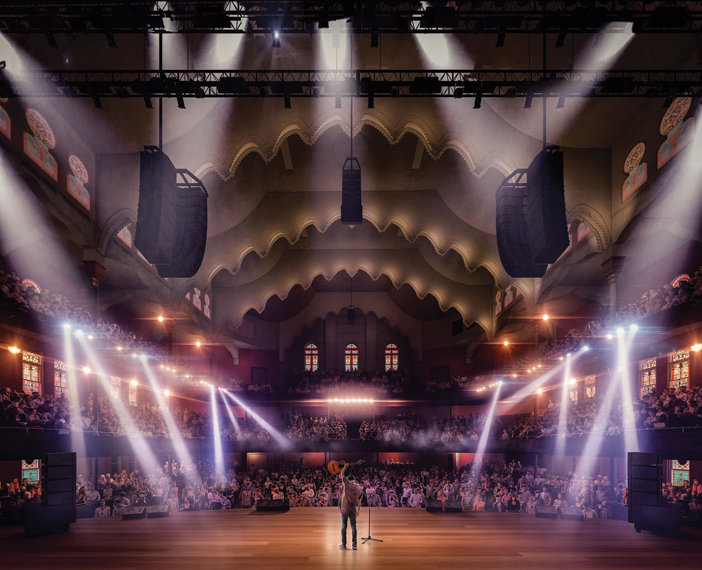 Massey Hall, arguably Canada’s most storied concert facility, will open again, but in the embrace of a larger complex called the Allied Music Centre. The 1894 landmark – we are assured that it will be called Massey Hall – will be flanked on the south by a seven-story structure including a new theatre, studios, a bar and a club. “When music fans return to the Grand Old Lady of Shuter Street, they will revel in its sense of history and signature acoustic warmth while ­enjoying the modern appointments and comforts that have historically proved ­elusive,” the website promises. Among the novelties is a ­main-floor seating system that “allows for deep musical connections in its ­traditional seated configuration and gets the audience on its feet for high energy shows when the seats are stored beneath the stage.” Hmm. There is some good news: more than 100 stained-glass windows and the plaster ceiling will be restored in the “Allan Slaight Auditorium”­ (so-called in recognition of a $10-million donation from the radio ­pioneer’s foundation). Once the home of the Toronto Symphony and a venue for the likes of Horowitz, Pavarotti and Rubinstein, Massey Hall became essentially a rocker roadhouse after the opening in 1982 of Roy Thomson Hall. No timeline has been mentioned for the ­completion of the Allied Music Centre.