Comparisons might be invidious but they are sometimes essential. Or unavoidable. It would take quite an act of inner denial to discuss the OSM performance of Bruckner’s Fourth Symphony as led on the morning of Nov. 28 by Kent Nagano with no reference to the pair given over the weekend in New York and Philadelphia by the Orchestre Métropolitain under Yannick Nézet-Séguin. Possibly some in the Maison symphonique for the OSM also heard the OM in pre-tour launch mode on Nov. 16, although just who goes to which orchestra in this town remains a puzzle I expect never to solve.

How do the Fourths stack up? To be sure, the OSM is the beefier ensemble, with more ranks of strings (including, intermittently, the octobass, which offers mostly visual support). Of course the wind count is the same but I have a feeling that the larger string complement nudges the OSM brass in the direction of greater monumentality. The fortissimo statements of the main were as big and burnished as they could be. Even the horn call at the beginning was relatively assertive, a statement of purpose rather than an emergence from the void. 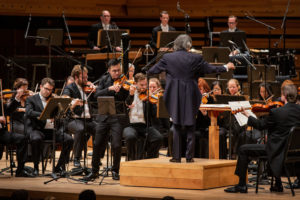 Yet in these places and elsewhere I felt the greater sonic strength of the OSM did not necessarily translate into a superior symphonic experience. YNS is a more active tempo-manipulator and phrase-shaper than Nagano, who tends to hear this music as a sequence of sentences and paragraphs rather than a poetic outflow of words. This is not to say there no personal touches in Nagano’s conception. The Andante was solemn and hymnlike. Andrei Malashenko demonstrated in the final bars how much artistry can go into a simple pattern of quiet timpani strokes.The pace was generally slower in the Nagano performance, notably so in the Trio of the Scherzo, which lacked the picturesque quality that YNS and the OM brought to it. Competition was stiffer in the finale: Nagano’s well-judged tempos served to elucidate the architecture. Nézet-Séguin made this complex movement more of a bar-by-bar adventure. An interesting test case was the fortissimo statement in the strings at measure 245, yearning for the OM, self-assured for the OSM.

Assigning points can be tedious. What needs to be said is that the tingle factor was higher in the OM performances. Obviously these musicians had the psychological advantage of making their Carnegie Hall and Verizon Hall debuts. Possibly they felt the music more urgently. And somehow – in mysterious ways – projected that urgency into the hall.

I attended the morning OSM performance because this was the only concert of three (over two days) to feature a new Violin Concerto by Montreal-born Samy Moussa. Subtitled “Adrano” after a Sicilian town near Mount Etna, the 13-minute commission opens and closes with music that shimmers at high altitude and low volume. In between we hear a cadenza and an extrovert scherzo, the latter pulsing but too harmonically active to be characterized (or stigmatized) as minimalistic. Indeed, some of the progressions were hard to parse. One felt the composer was referencing functional harmony without directly exploiting it. 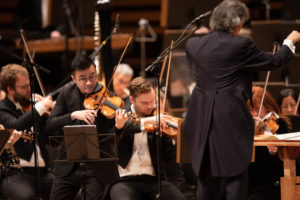 Still, the effect was intriguing. One could admire also Moussa’s determination in the first movement to make the most of a simple soaring theme. The result was an impression of constant striving for something lofty. Not all contemporary music has this effect.

Concertmaster Andrew Wan blended exquisitely with the orchestra in the first movement and stood out appropriately in the cadenza, with some virtuoso flourishes worthy of Wieniawski. Apparently the violinist succeeded too well: the audience interrupted the performance with applause.

This was not the only difficulty. The concert started five minutes late, as latecomers streamed in and Nagano waited patiently – and in vain – for the coughing to subside. Since this performace is the only basis for a “live” Analekta recording also featuring Bernstein’s Serenade (the complement of the two evening programs), we can safely assume that the so-called patch session will be even more extensive than usual.